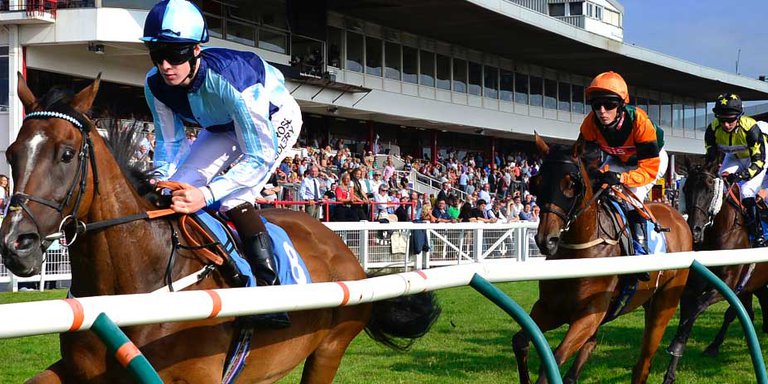 History
Racing on the Sands

Redcar Racecourse is steeped in history and can trace its beginnings back to the early part of 18th Century when racing was a much simpler affair with only a handful of races taking place on Redcar beach. Prizes were modest as were the facilities, a temporary grandstand was erected by an enterprising local joiner, Mr. Adamson, who charged for using it. In return he had to put up a judge’s box (a bathing van) and winning and starting posts free of charge!

The Chairman in those days was John Hikeley who owned the Lobster Inn in Coatham.

The introduction of new Jockey Club rules dictated that money was to be raised from entrance fees and so racing was moved away from the sands. The final meeting on the sands was in 1870 where John Osborne won the Cleveland Hunt Cup, value £30 and Mr. Peacock won the Licensed Victuallers’ Stakes of £15.

Mr John Hikeley and a group of local sportsmen approached Mr Newcomen of Kirkleatham Hall and secured a twenty-one-year lease on the present course. The new racecourse was built in accordance to the new Jockey Club Rules and so fences for hurdles were built and a parade ring made.

A Clerk of the Course was appointed, Mr Thomas Dawson, who was responsible for putting in drains, levelling the track and returfing where necessary. The first meeting on the new course was held on August 9th 1872.

1875 Erection of the Grandstand

Mr. Newcomen was the Chairman and the Earl of Zetland was Vice-Chairman. The Directors decided to spend £2,650 to build a new permanent Grandstand and Stewards’ stand. At the Directors’ meeting in September that year the Chairman said: ‘Redcar has a stand second to none in the Kingdom’

1877 Erection of a Second Stand and Stables

In 1877 it was decided to build a stand for those in the second enclosure as it had been the policy of the Race Company from the outset to cater for the comfort of people on all parts of the course. A year later stables were built so horses no longer had to be stabled in Inn yards around the town and brought through the traffic on a race day.

In 1879 the Racing Correspondent from Bailey’s Magazine (the racing paper of the day) visited the Racecourse and described the course as having a ‘pretty stand, convenient business offices, a straight mile, and good going’. This publicity put Redcar on the racing map.

During the First World War the course was used as an airfield with flight training carried outby the Royal Naval Air Service.

In the Second World War it became an army camp. During this period the racecourse was neglected somewhat. When Major Leslie Petch (John Hikeley’s grandson) was appointed Manager in 1946 there were only four days’ racing and the stands and track were in a very poor condition having been neglected during the Second World War. Mrs Rose joined Major Petch as his Secretary in about 1953. She worked tirelessly for both Redcar and Catterick Racecourses and moved the office from Liverton Lodge to the Racecourse when Major Petch retired. Mrs Rose was honoured for her contribution to racing over a 40 year span and awarded an MBE.

Leslie Petch had a good groundstaff and during the next 10 years he and the two McHales along with the other staff including Dick Glarvey and Laurie Goddard worked tirelessly to improve the Racecourse. Redcar was the first Racecourse to have closed-circuit television, a timing clock and the first to introduce furlong posts.

Enormous popularity of the racecourse and overcrowding in the Club and Tattersalls stands demanded improvements to the racecourses facilities. April 25th, 1964 saw the erection of the new Grandstand. This Grandstand is in use today and is continually undergoing modernisation and improvement.

When Leslie Petch retired in 1971 he told the Evening Gazette that he regarded Redcar as his greatest achievement because ‘he rescued it from being a small insignificant meeting with a derelict stand and produced it as a viable going concern owning 80 acres of land in the centre of the town.’ He is described by Gerald Curry as ‘one of the real visionaries of British racing’. His daughter Jill Garrett and Granddaughter Alison Baptiste continue an active role as directors of the racecourse.

The Zetland family have been heavily involved in racing from the onset. It was Sir Lawrence Dundas who registered his colours, a white silk shirt with red spots to create the famous “Aske Spots” in 1774.

In 1884 Mr. Newcomen died and was succeeded by Lord Zetland as Chairman. The first marquess was a major influence in the opening of the present racecourse. His descendants have been Chairmen with Lawrence Mark Dundas, 4th Marquess of Zetland actively carrying out this role today. When Mark Dundas, 4th Marquess of Zetland took over as Chairman and Manager he oversaw the sale of land to Safeway so was able to undertake a large building programme. The first building to go up was a luxury stable block with amenities for the stable lads and a new hostel for overnight accommodation.

One the stable block and hostel were completed Lord Zetland  then turned his attention to the stands, knocking down the old Mississippi building, replacing it with the new Paddock Rooms.

Lord Zetland was also responsible for improvements made to the race programme by introducing the prestigious Two-Year-Old Trophy in October 1989 currently worth £175,000. It is widely regarded as one of the most valuable races in Europe and remains one of the most popular meetings of the year for the ‘Seaside Racecourse’.

John Sanderson, nephew to Major Leslie Petch has long been connected to Redcar Racecourse. He started as Assistant Manager to Leslie Petch at York Racecourse and combined this with a Director and Clerk of the Course at Redcar as well before moving to Thirsk to do the same job there.

Having completed 20 years at York Racecourse Mr Sanderson started the company International Racecourse Management that has managed Phoenix Park Racecourse in Dublin and Doncaster continues with the administration of Catterick, Wetherby and Redcar. They also advise racecourses abroad mainly in the Middle and Far East. Redcar racecourse has been under IRM guidance and management since 1996.

In 2008 IRM resumed overall management control at Redcar Racecourse and appointed Amy Fair as resident General Manager in charge of all the general management and commercial operations.

At the end of the 2018 season Lord Zetland stood down as Chairman and John Sanderson became Chairman.

From the onset Redcar Racecourse's aim was to encourage families to come and experience the energy and excitement of a day at the races. It still continues to do this with many of the season’s meetings focusing on family orientated themes and entertainment.

The Racecourse understands that in order to secure future customers it must continue to make racedays appealing to families through positive happy experiences and excellent customer service.