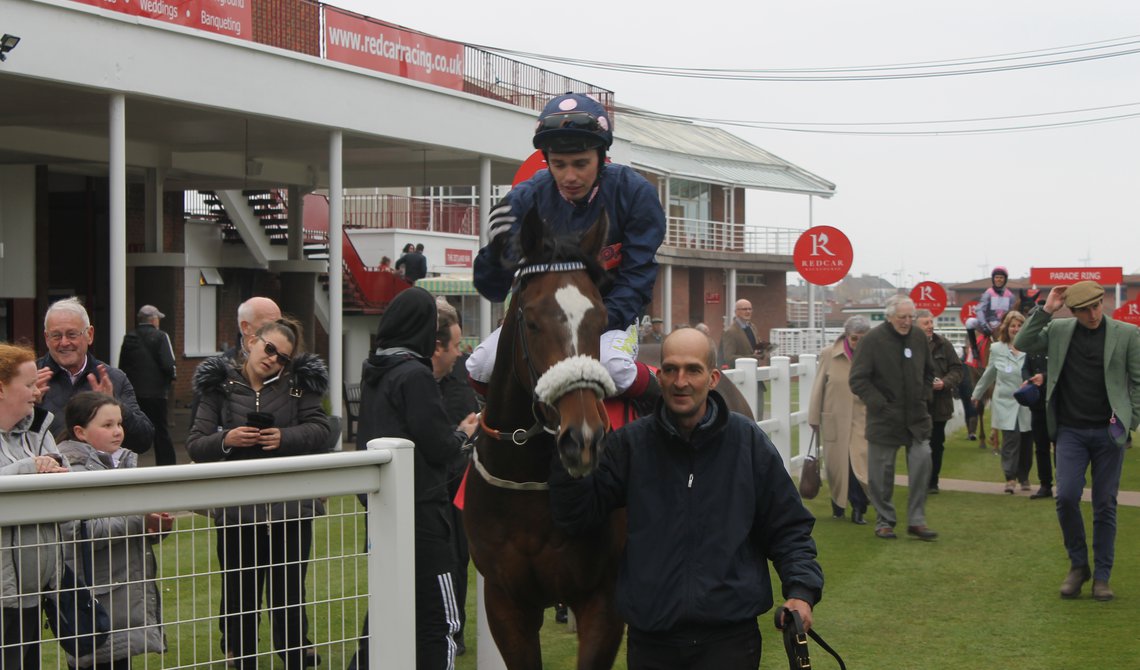 MIDDLEHAM trainer Ben Haslam and jockey Andrew Mullen teamed up for a 20-1 winner at the opening meeting of Redcar’s season and the combination look poised to score again at the seaside track’s Easter Monday meeting.

Haslam, who trained Sandret to win at Redcar on April 8 (see picture), has Blazing Dreams going for a hat-trick in division two of the Grace Chapman Designed Today’s Racecard Cover Handicap.

The gelding has won his last two races, both at Newcastle this month, and was staying on strongly both times. Providing he can transfer that all-weather form to Redcar’s turf, he looks to have every chance of racking up the three-timer.

Another going for a hat-trick is Jedd O’Keeffe’s Echo in the racingtv.com Handicap. Following an unsuccessful stab at hurdles, he’s also won his last two flat races at Newcastle. They were over 1m 4f and he was staying on in the style of a horse who will relish this longer trip.

Eight-race cards have become the norm at Redcar with trainers from throughout the country recognising the quality of the track, and the meeting gets underway at 1.55pm with the Watch Racing TV In Stunning HD Novice Stakes.

The southern big guns are on raiding missions again and the market is likely to be an important guide. Charlie Hills sends up Fragrant Dawn, who was third on both her runs as a two-year-old, including behind a 150-1 winner when odds-on at Chelmsford City. William Haggas probably has the main danger in the Dubawi colt, Country, who was sixth of ten on his only run at Doncaster. However, Mark Johnston’s Stone Cougar should not be underestimated on her debut.

Ruth Carr, who trains near York, looks to hold the aces in the Remembering Susan Rusby Handicap. She trains both Katheefa and Zebulon, who are likely to be among the market leaders. Katheefa went clear and was eased inside the final furlong at Southwell at the start of this month, while Zebulon showed promise with a staying on fourth at Wolverhampton a few days later. It’s interesting that JP Sullivan, who won on Katheefa at Southwell, switches to Zebulon this time.

Hortzadar, trained by David O’Meara and ridden by Danny Tudhope, look to have the Join Racing TV Now Handicap at his mercy following a comfortable win at Pontefract a week ago.

Another North Yorkshire trainer, Paul Midgley, is taken to sparkle in the feature race of the day, the Market Cross Jewellers Handicap, with Saluti. The gelding was always in the front rank when second of 19 over seven furlongs at Doncaster last time and can go one better over a furlong less.

The powerful Roger Varian yard is always to be feared when he sends runners to Redcar and Mushaageb looks primed for division one of the Grace Chapman Designed Today’s Racecard Cover Handicap.

The meeting closes at 6pm with the Like Racing TV On Facebook Handicap. John Quinn’s Secret Picnic had every chance but hung right in the closing stages when second last time at Chelmsford. The danger is David Brown’s Ascot Dreamer, who was second last time at Chelsmford City and should strip fit after four runs already this season.