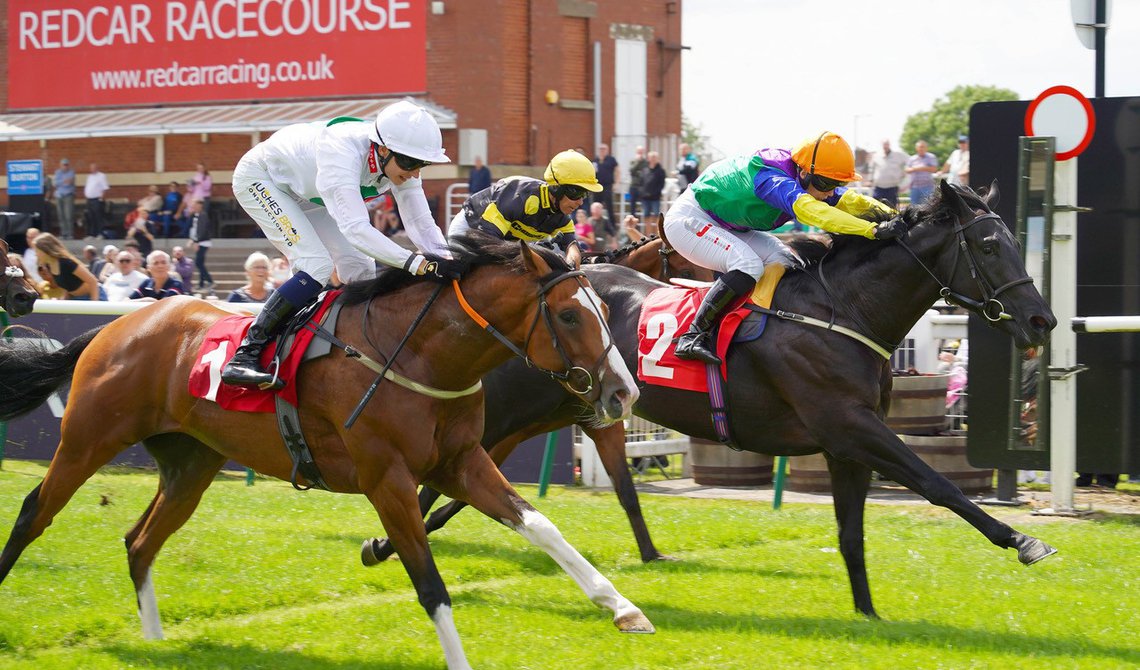 NORTH Yorkshire-trained Lakota Blue earned a tilt at the historic Gimcrack Stakes at next month’s York Festival with an impressive victory at Redcar today.

The two-year-old colt (below) trained at Malton by Nigel Tinkler and ridden by Faye McManoman, stayed on well to win the opening Best Flat Races Live On Racing TV British EBF Novice Stakes by a neck from David Barron’s promising Hoy.

Owners Ian and Pam Bendelow, who live within a stone’s throw of Tinkler’s yard, immediately nominated the Group 2 Gimcrack Stakes, at York Ebor Festival, as the target.

Mr Bendelow said: “If he hadn’t run well today, we’d have scratched from the Gimcrack, but he’s done it nicely, so that’s definitely the plan. He’s very good and improving with every race.”

Tinkler added: “That was a hot race for a Wednesday at Redcar, but he’s done it well. He’s a good horse, and the owners fancy the Gimcrack, so why not?”

Fresh from Saturday’s Group 1 success in Saturday’s King George at Ascot, PJ McDonald was in the winner’s enclosure in Redcar’s second race of the day, the Watch Racing TV In Stunning HD Fillies’ Novice Stakes.

Next Chapter (below) showed plenty of authority to go clear of Marco Botti’s Minwah. The winner, trained at Newmarket by James Tate, looks a filly with a bright future. 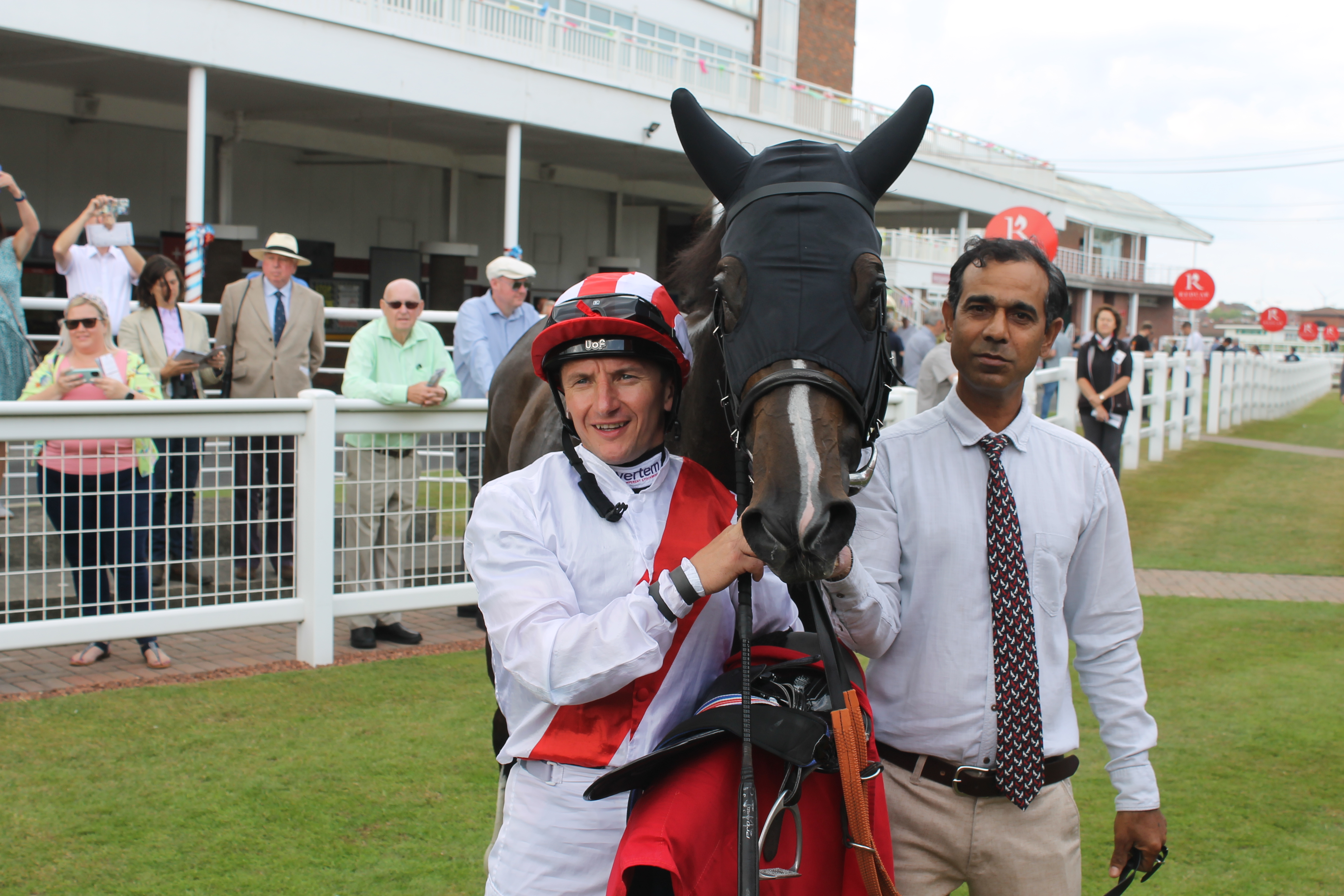 Tim Easterby’s Forgivable stayed on gamely under David Allan to score for the first time in seven runs in The Celebrate The Life of Joe Newton Handicap.

The Iffraaj gelding (below) is owned by Benoit and Bridget Guerin, the first female chairman of York Racecourse

Mrs Guerin said: “We thought great things of him as a two-year-old but he never really fulfilled his promise, so it’s a relief to see him win as a three-year-old. We think we’ve found his distance now.” 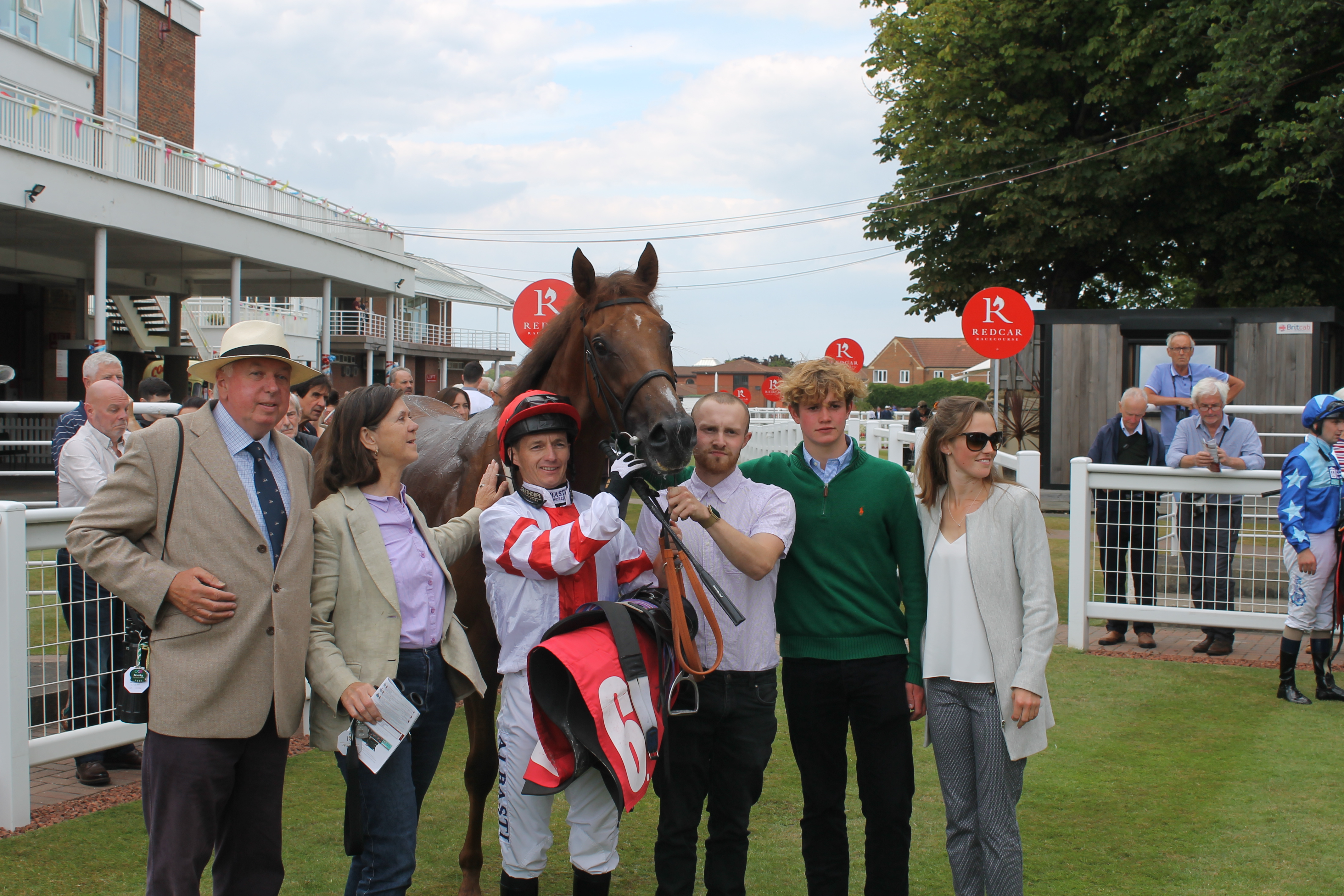 The step up to a mile paid off for another son of Iffraaj when Point Lynas (below) landed the racingtv.com Straight Mile Series Handicap under Andrea Atzeni in a close finish with Richard Fahey’s Ana Gold.

Successul Middleham trainer Ed Bethell said: "That was a tough performance. He’s a free-running horse and he knuckled down well, with the step up to a mile suiting him today.

“I’m delighted for the owners, Julie and David Martin, and Dan Hall, who’ve supported me from the word go. Hopefully, he’ll continue to progress.” 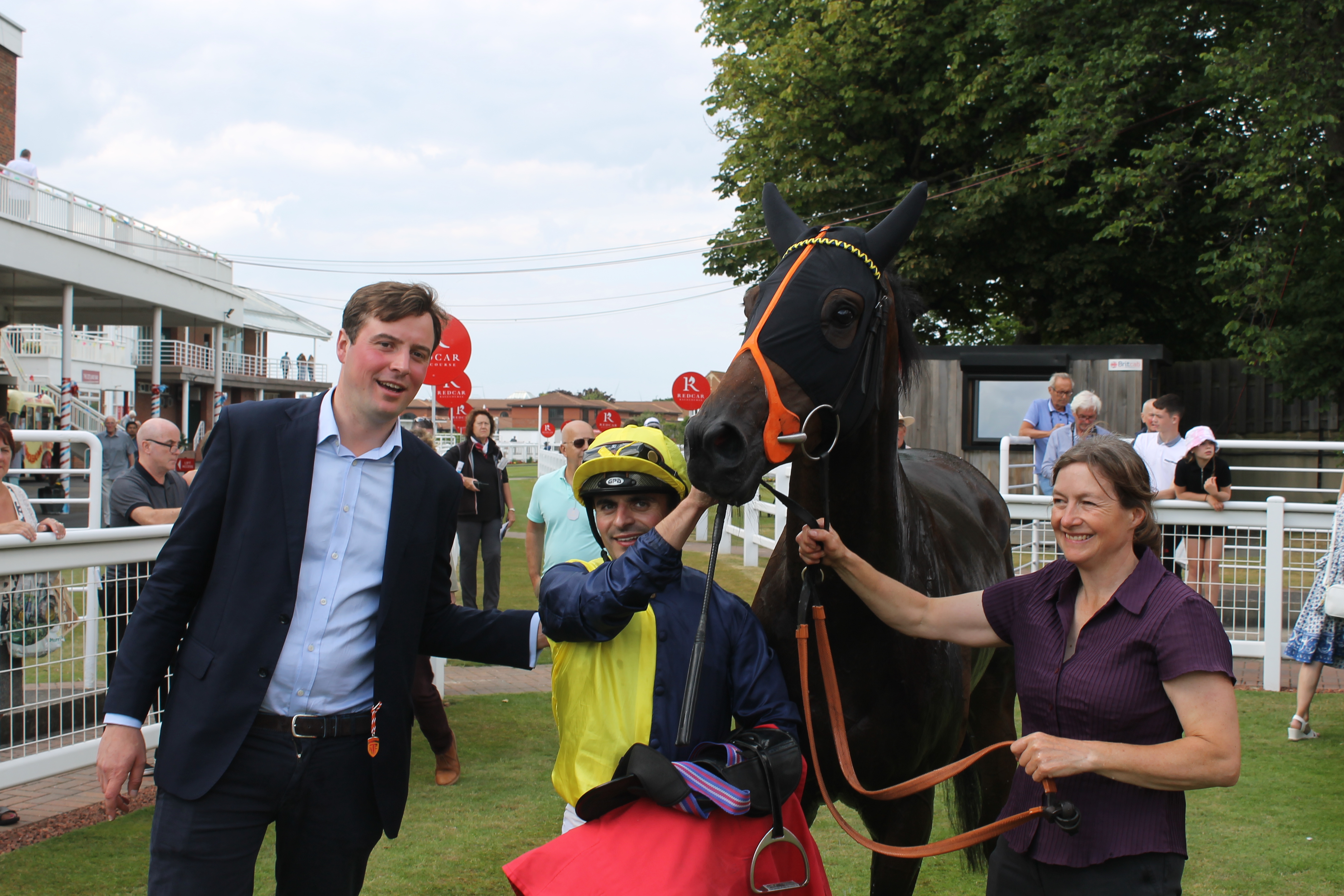 There was a third win of the season for Isle of Dreams, ridden by five-pound claimer Zak Wheatley, and trained at Malton by Declan Carroll, in the Visit racingtv.com Handicap (Division 1).

The filly (below) proved too hot for Ann Duffield’s Cuppacoco, and prevailed by three-quarters of a length, with Carroll saying: “She’s such a game filly – the biggest part of her is her heart.” 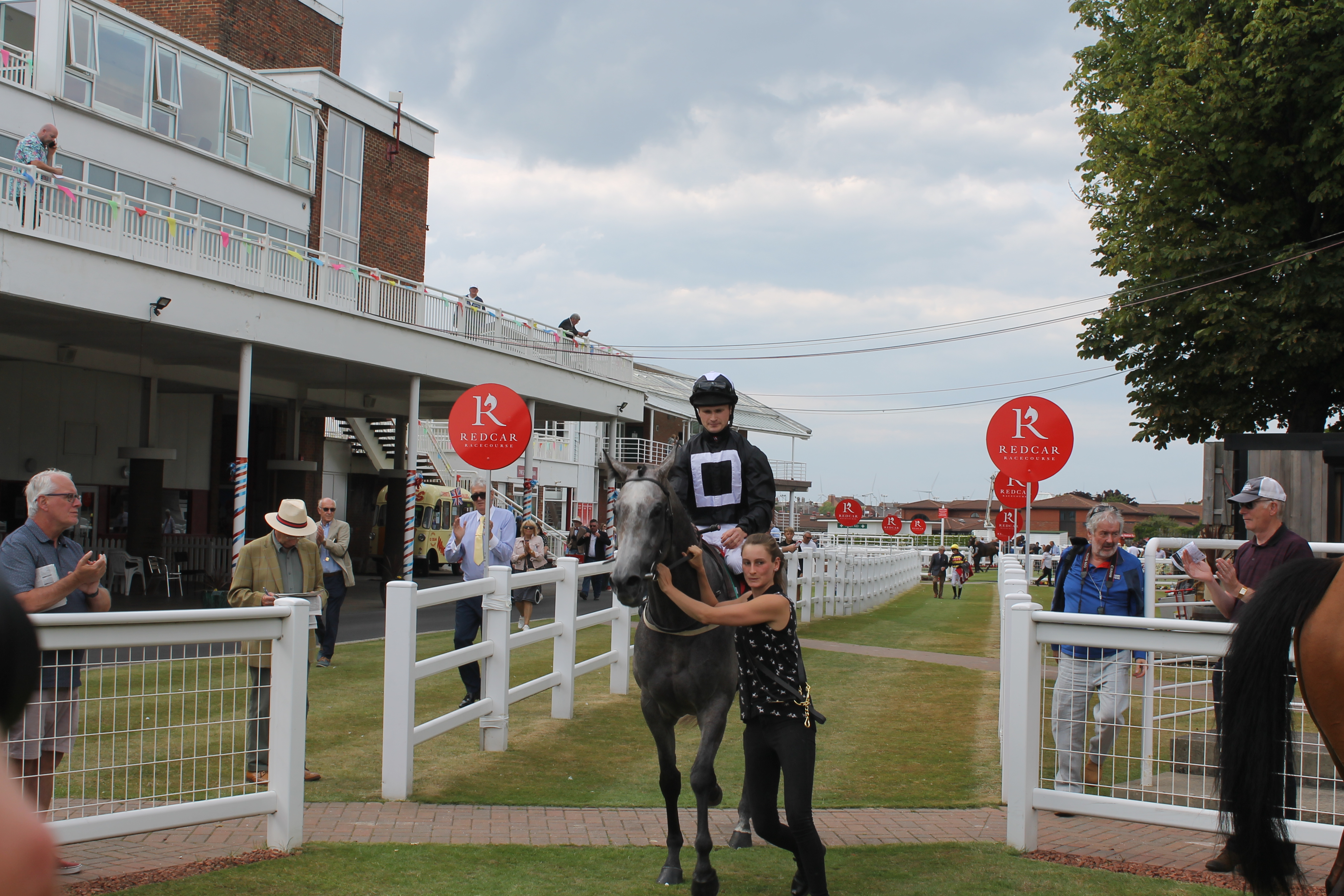 Hurstwood, owned by three farriers, forged ahead in the final furlong to win the Visit racingtv.com Handicap under a strong ride by Paul Mulrennan.

With all those horseshoes around, Brian Greenley, Matt Argo, and James Lawson – all blacksmiths for Tim Easterby – should have their fair share of good luck, and so it proved.

The three farriers form the Hard Held Partnership and jointly own the gelding (below) with Angus Racing, made up of members of Mallton trainer Peter Niven’s family.

Brian, who takes pride in shoeing his own horse, said “He’s won three times for us now. He’s had a few problems this season, but Peter’s got him right now.”

The trainer added: “He’s taken a while to come to himself but it’s nice to see him win like that because he’s quite a capable little horse.” 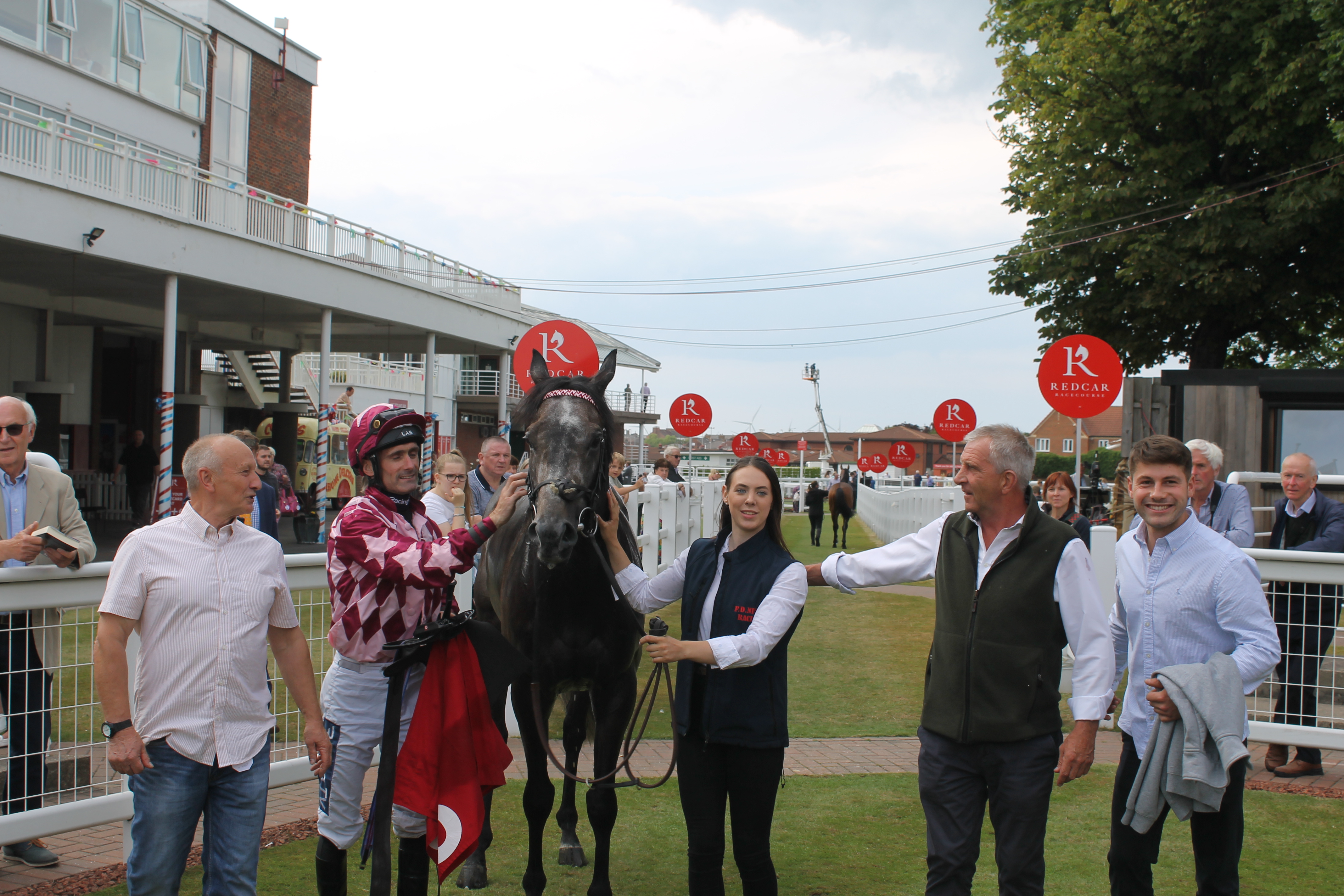 Alice Keighley made it four career wins from eight rides when Viva Voce (below), trained at Thirsk by David and Nicola Barron, won in the AJA Novice Flat Amateur Jockeys' Handicap.

Alice said: “They went quick and the trick with him is to sit and wait.  That’s what we did and he did it really well today.” 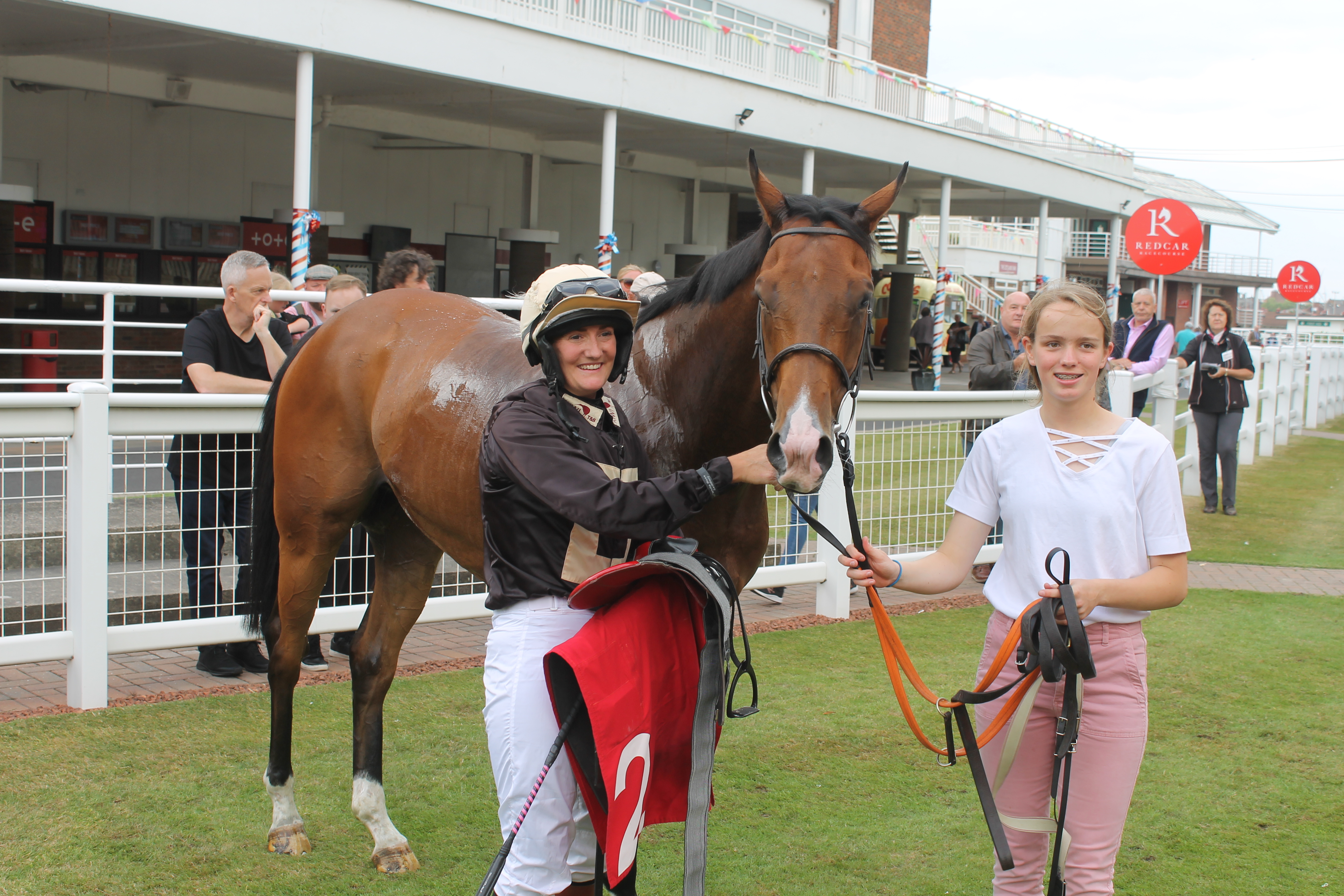 The victory was a real family affair because Alice Keighley's mum and dad, Sam and Mark, along with Granny and Grandad, Judy and Alan, and step-grandad, Dave, were all at Redcar to see her win. 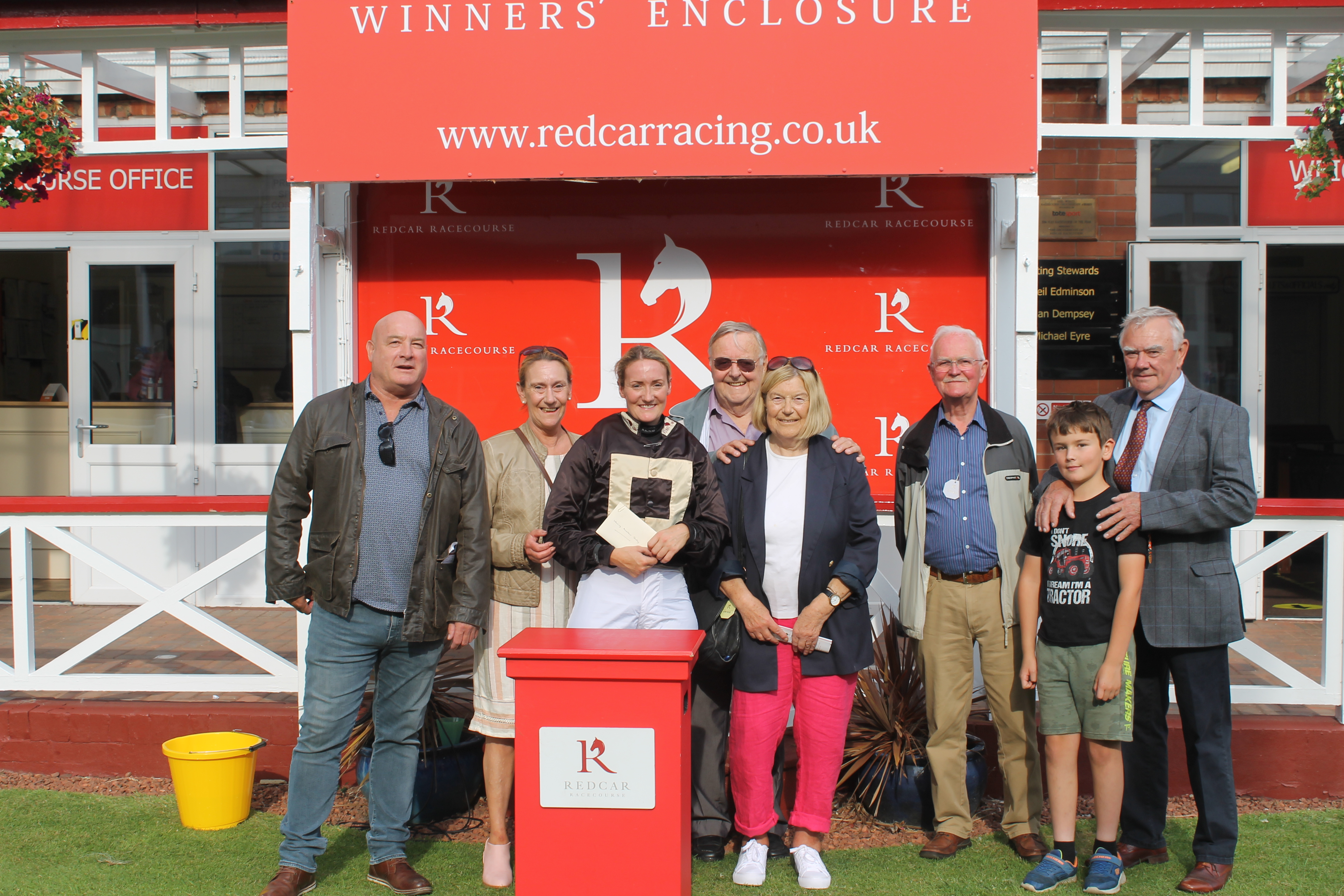