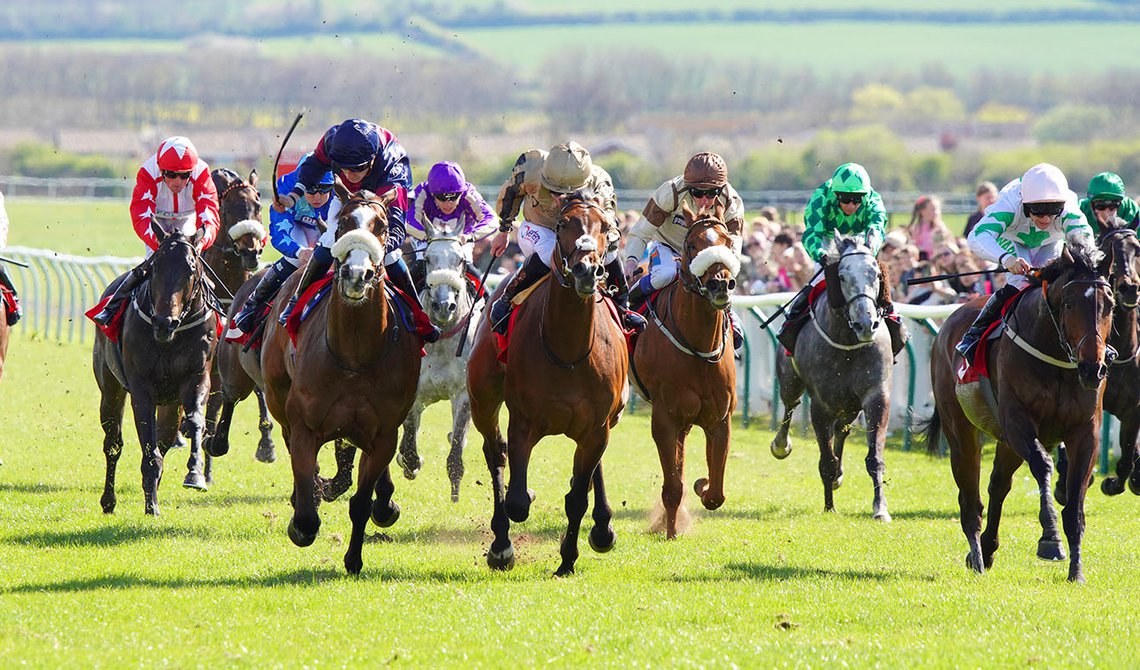 TRAINER James Horton had a day he will never forget at Redcar Races today when he got his career off the mark with a treble.

Horton, who spent seven years as assistant trainer to the legendary Sir Michael Stoute, was head-hunted to become private trainer to John and Jess Dance in Middleham.

The Dances are investing massively in developing historic Manor House Farm and, in the meantime, Horton is renting a yard from Sally Hall.

The first winner of the new operation came when Phantom Flight (below), a 100,000 guineas Siyouni colt, outbattled debutante Frankel filly, Take My Chances, in the hands of PJ McDonald in the opening Watch Racing TV In Stunning HD Novice Stakes. 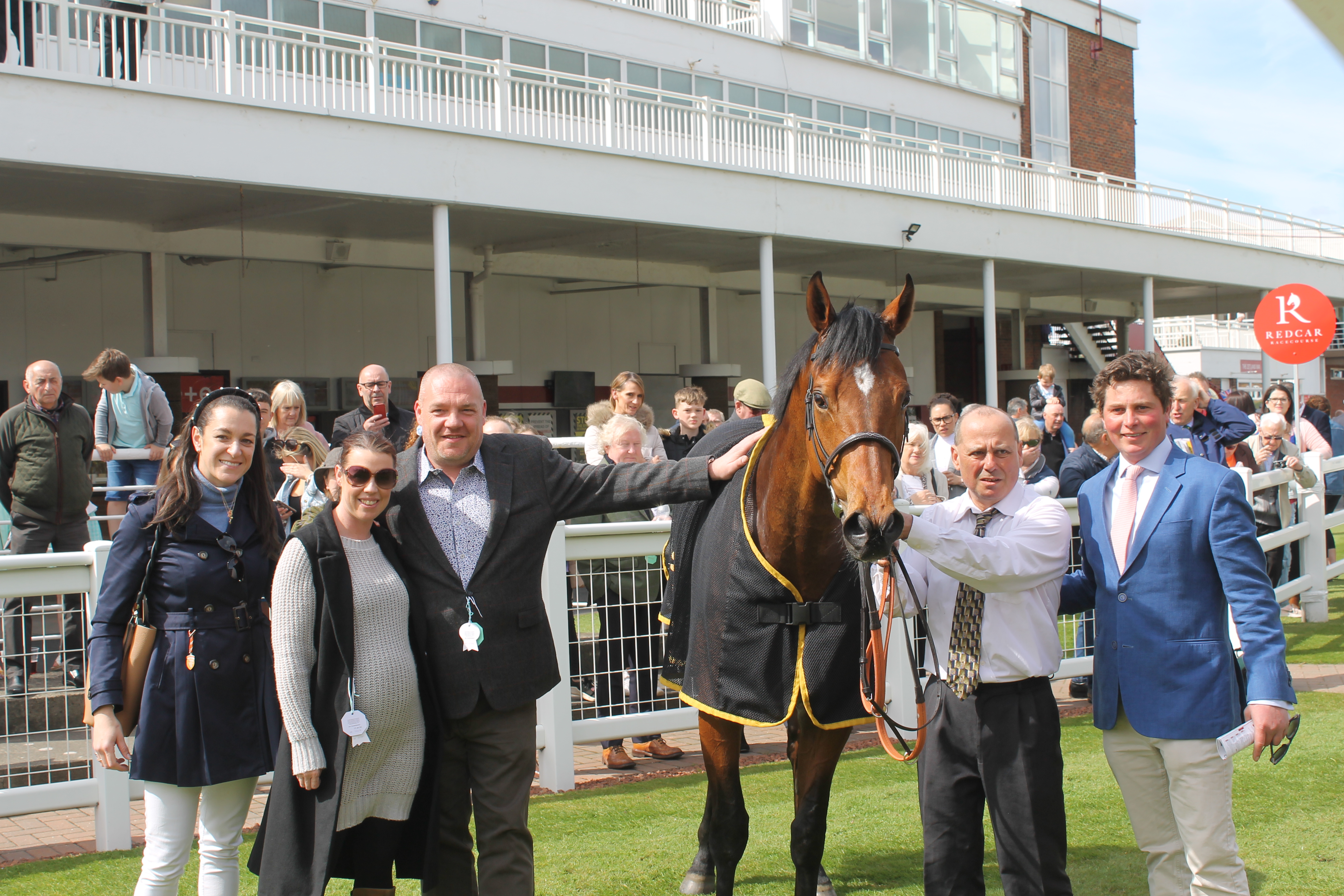 The same trainer-owner-jockey combination went on to strike again with Il Bandito in The Join Racing TV Now Handicap (main picture) and sealed the hat-trick with Asjad (pictured below) in The Market Cross Jewellers Handicap.

After Asjad’s comfortable victory from Michael Dod’s Woven, Horton said: ““I never imagined a day like this, but I thought they were all in good form and in the right races. It’s great to have had John and Jess here to see it because they’ve put so much into it all.

“I thought Phantom Flight would come on for his last run, and the same applied to Il Bandito. Asjad has been a bit gassy in his races, and maybe doing a bit too much, so we told PJ to go back and relax to make sure he finished, and he did it very well.

“I always liked Redcar when I was with Sir Michael Stoute, he liked to bring nice horses up here because it’s a lovely track. I’m sure we’ll be back on many occasions.”

John Dance added: “It’s been an unbelievable day to pick up the three races and here’s to many more.”

Phantom Flight was named when some RAF helicopters landed at Manor House Farm in the middle of the night, and it was the talk of Middleham the next day. At the time, the horse was unnamed.

“We still don’t know what it was all about, it’s a bit of a mystery, so Phantom Flight it was,” explained Horton.

The form worked out well in the second race of the day, the Watch Racing TV In Stunning HD Novice Stakes, when Muhtashim (pictured below), trained at Newmarket by Ed Dunlop, outbattled the William Haggas-trained favourite, Wilkins, under a strong Ben Curtis ride. 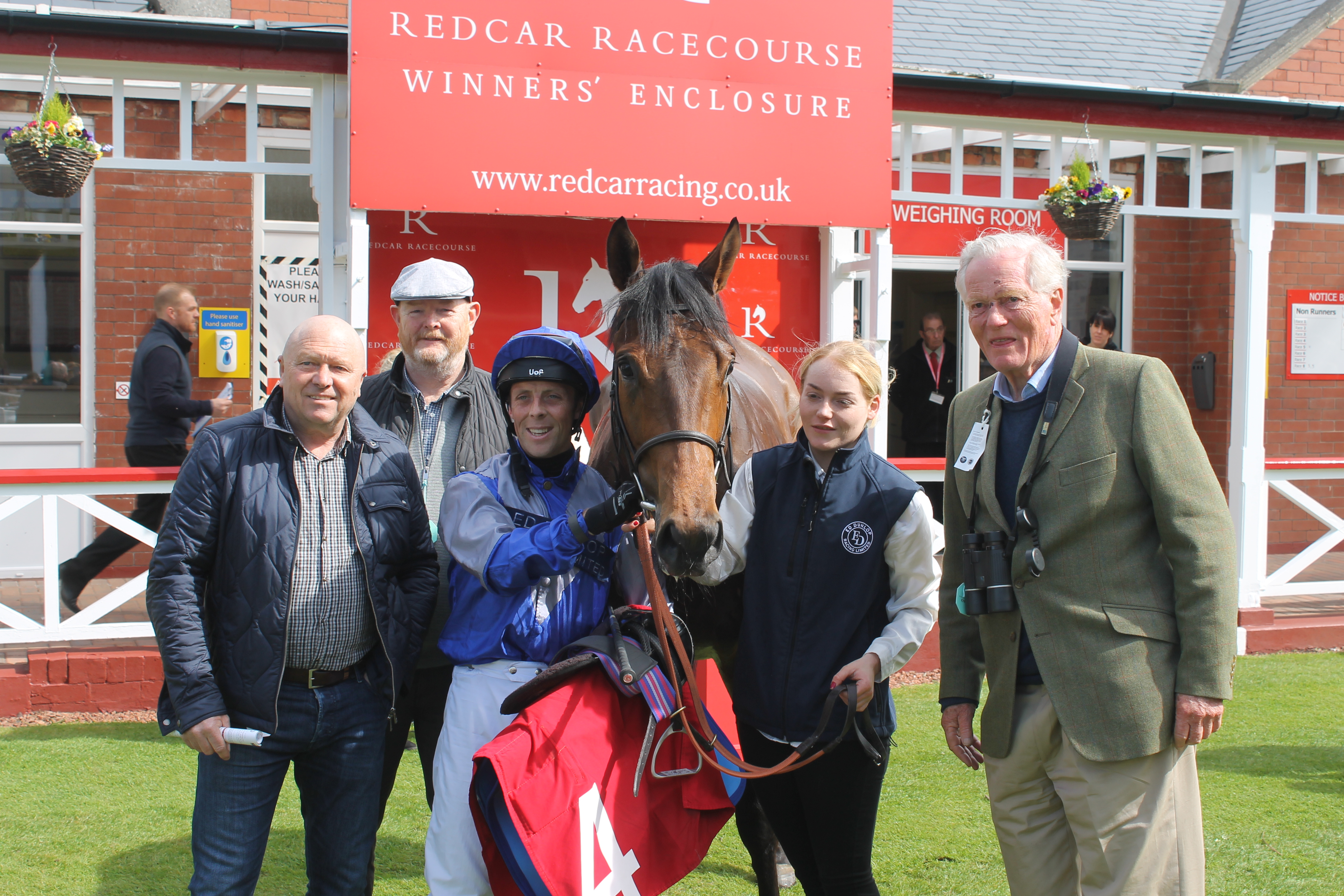 Muhtashim had beaten Phantom Flight in his previous race at Newcastle and Johnny Hall, speaking on behalf of the owners, the La Grange Partnership, said: “He was up against a good animal in the favourite. We believe Mr Haggas fully intended to win the race so we’re very pleased to have done him!”

Power Point’s last gasp win in The Andy Taylor Senior Is 80 Today Handicap Stakes (pictured below), is sure to have been the toast of the Foxhound Inn, at Flixton, Scarborough, because the horse is owned by the Bavill family, who run the pub. 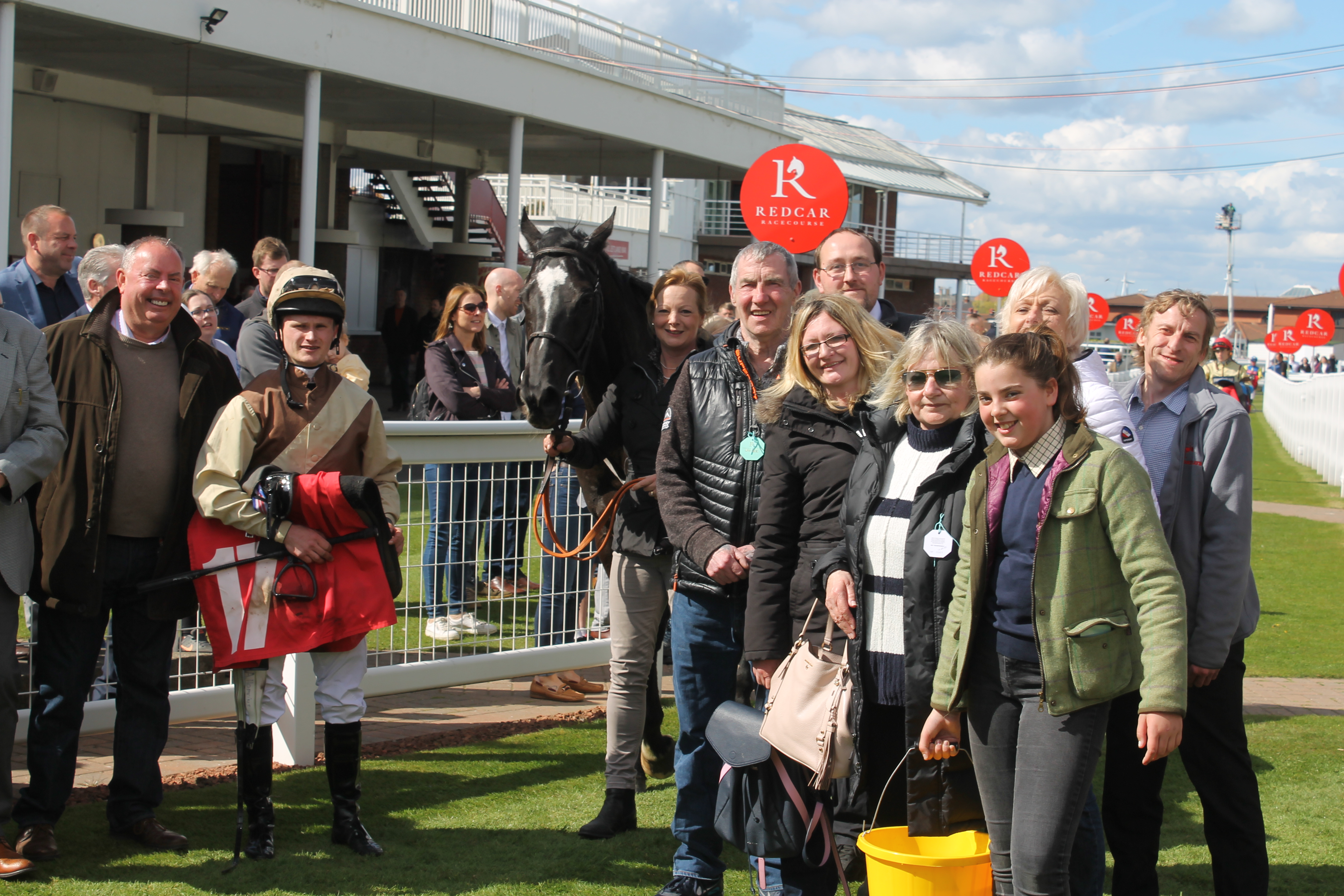 The gelding, trained by John Wainwright, at Malton, and well ridden by five-pound claimer Zak Wheatley, landed odds of 40-1, while narrow runner-up Point of Woods was 50-1 and third-placed Mansfield was 66-1.

Joint owner Wayne Bavill said: “We’ve got six horses with John and he’ll definitely be the toast of the pub tonight!”

There was a poignant result in the Watch On Racing TV Handicap as Dougies Dream (pictured below), trained at Malton by Nigel Tinkler and ridden by Rowan Scott, scored an emotional win for owners Martin and Lisa Webb. 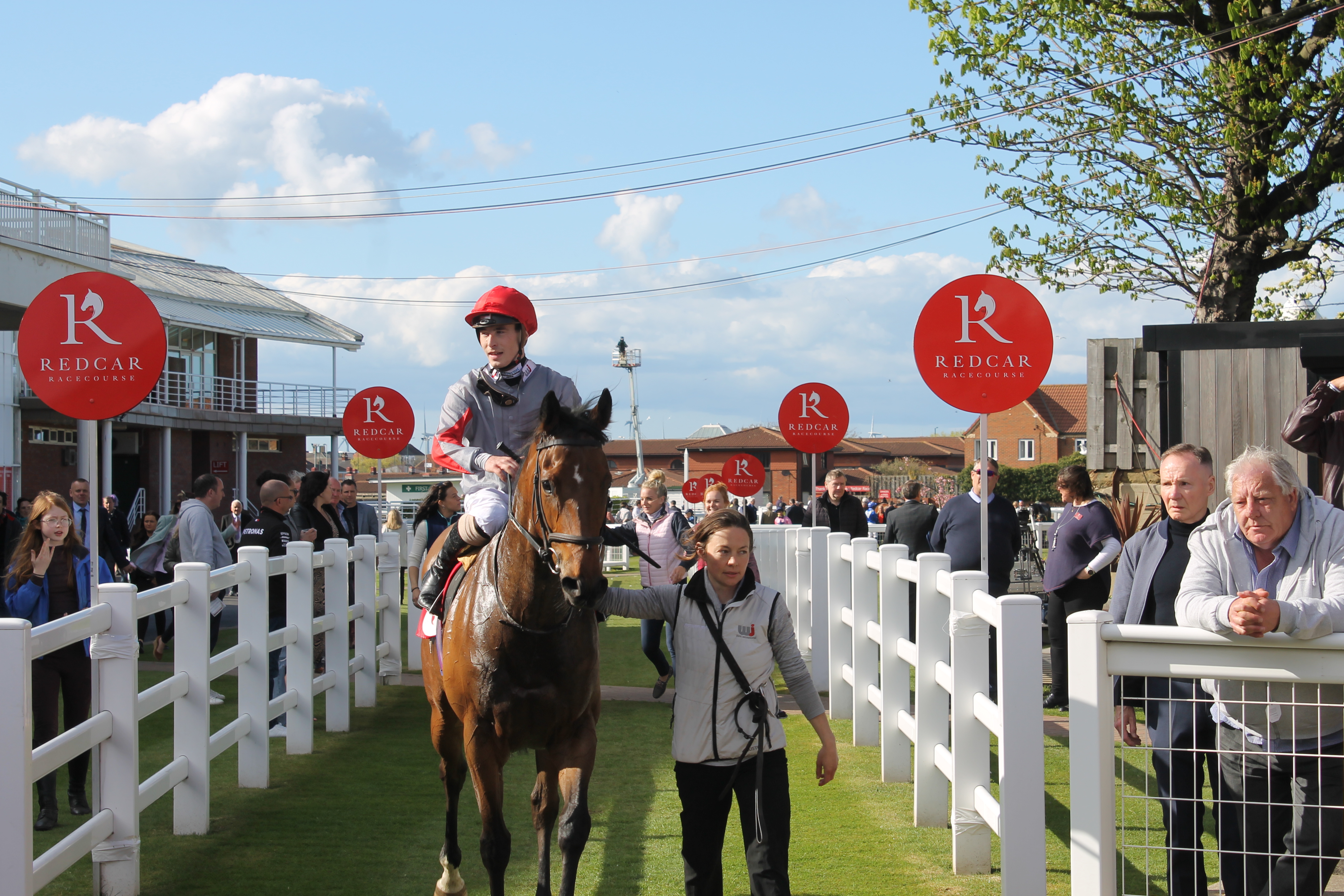 The horse was named by Lisa's dad, Dougie, just before he passed away. The couple, who come from Stoke-on-Trent, explained that Dougie had been given a list of names when the horse went into training, and he picked Dougies Dream.

Jockey Paul Mulrennan was quick to pay tribute to Sedgefield dual-purpose trainer Rebecca Menzies after Stanley Snugfit (pictured below) skated away with the Watch Race Replays At Racingtv.com Handicap. 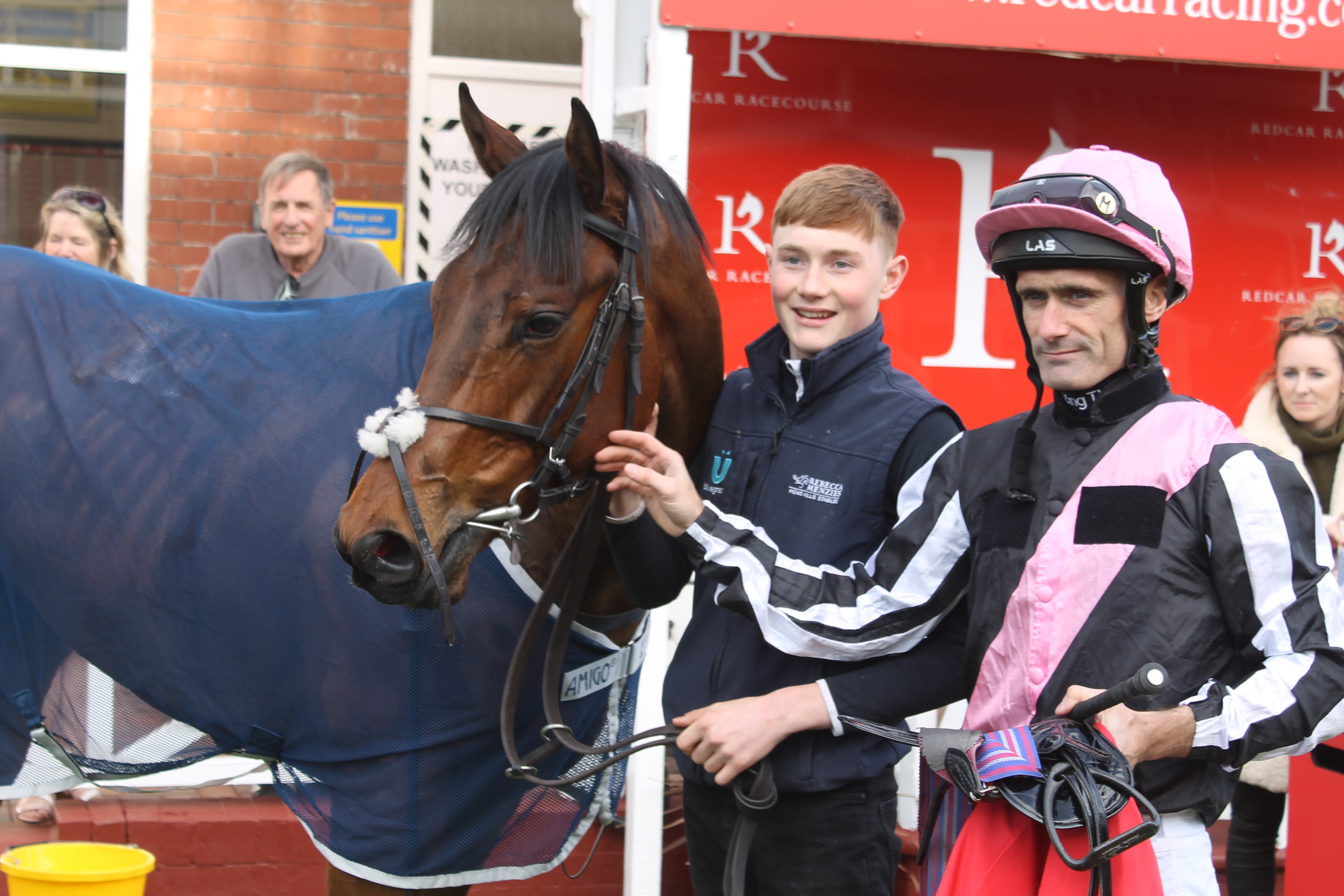 “It doesn't matter if it’s three miles over jumps or six furlongs on the flat - she's just a very good trainer,” he said

In turn, the trainer gave a lot of credit to Luke Savage, who looks after the gelding at home.

“Luke was a lot more confident than me about his chances, and he’s done a great job with him. He used to get worked up, but Luke’s taught him to settle, and Paul’s given him a great ride.”

Tiger Spirit (pictured below), trained in Lincolnshire by Michael Herrington and ridden by Jason Hart, earned his stripes in the penultimate Visit Racingtv.Com Handicap at the rewarding odds of 20-1. 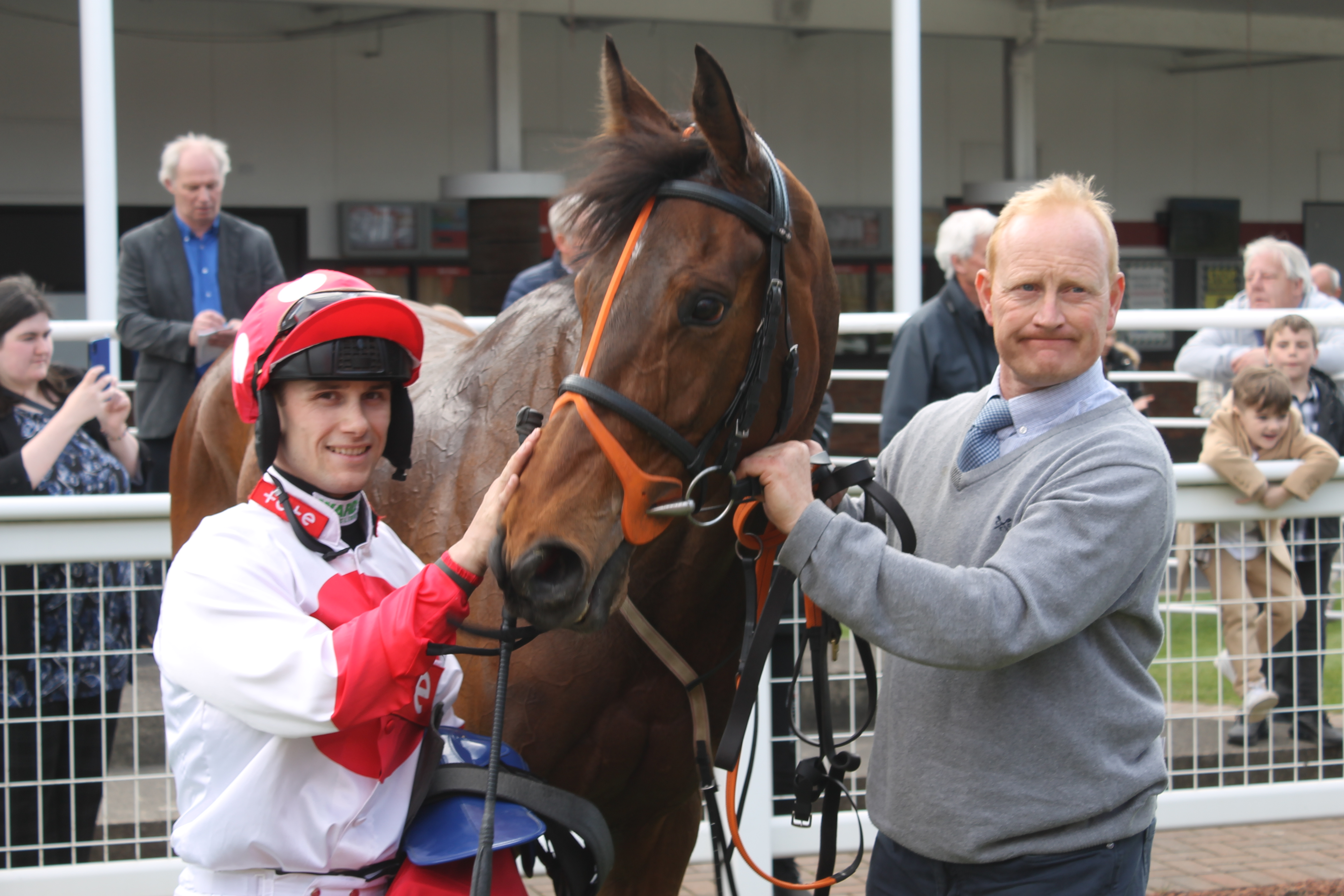