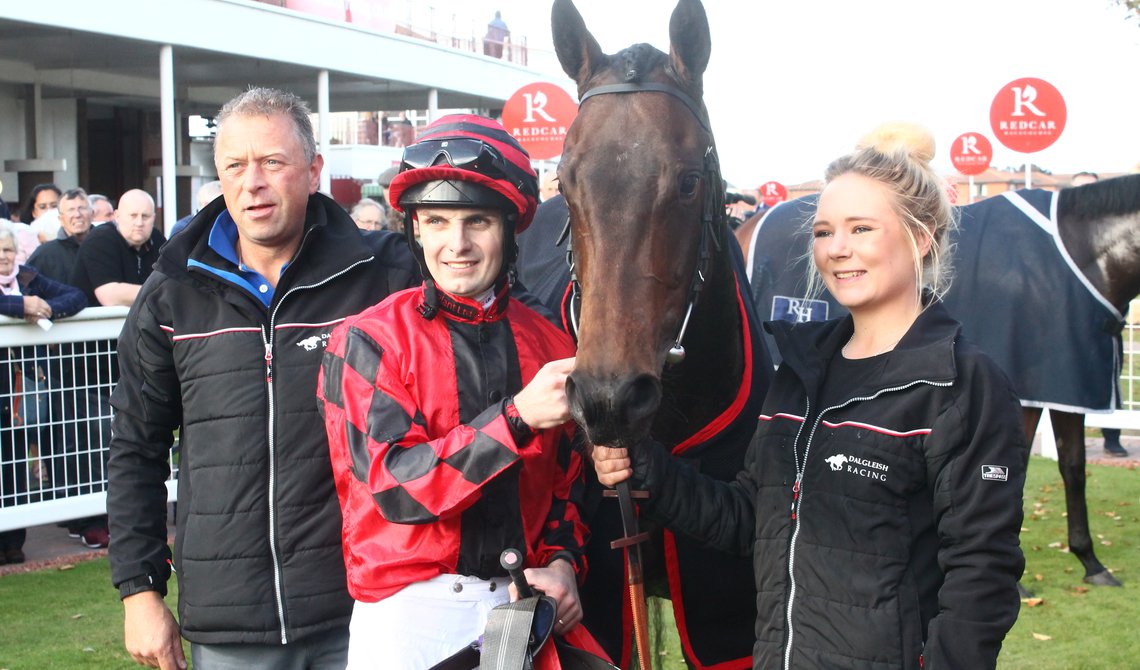 JOCKEY Connor Beasley, who was written off by some after suffering career-threatening injuries three years ago, was the toast of Redcar today after winning the seaside track’s richest race of the year.

Beasley was in a neck and back brace after suffering multiple injuries in a fall at Wolverhampton in July 2015, but is back riding better than ever, and took Redcar’s Racing UK Two-Year-Old Trophy in fine style on Scottish raider Summer Daydream.

Beasley said: “She really dug deep and did everything I asked. This was only her third run so she’s still learning her trade and she’s a filly with a bright future.”

Hannon gained compensation for Beat Le Bon’s defeat with a double, kicked off by the ultra-consistent Tabarrak in the listed Racing UK EBF Stallions Guisborough Stakes. The tough gelding, ridden by Tom Marquand, held on from the fast-finishing Roger Varian-trained Emmaus.

The Hannon double was completed when See The Sea held on gamely to win The Driver Group 40th Anniversary Selling Stakes.

Michael Dods, who trains at Denton, near Darlington, is having another fine season and he unveiled a promising sort in Myrmidons, 16-1 winner of the Racing UK’s Biggest Ever Flat Season EBF Stallions Novice Stakes (Division Two).

Myrmidons were Achilles' soldiers from Greek mythology and the Casamento gelding battled well to lead inside the final furlong to beat The Queen’s horse, Regular. Dods said: “We’ve always thought a hell of a lot of him but he’s been backward. I think he’s pretty useful, with a good engine, and will be better with time. It was nice to beat The Queen.”

The horse is owned by Dave Stone, managing director of Darlington-based Stone Technical Service, who said: “We thought he’d run well but we didn’t want to beat him up so it was a really good performance. He was very backward but he’s maturing quickly now and there’s more to come.”

The eight-race card got underway with a win for William Haggas and Tom Queally when Awe proved too strong for Saeed bin Suroor’s hot favourite Snow Storm in the Racing UK’s Biggest Ever Flat Season EBF Stallions Novice Stakes (Division One).

There were tears in the winner’s enclosure from overjoyed owners Lee and Sam Bond after the Tim Easterby-trained Give It Some Teddy won the Racing UK Straight-Mile Series Final at 20-1 under Duran Fentiman.

Record-breaking Mark Johnston took the Market Cross Jewellers Handicap Stakes when Winged Spur stayed on stoutly for Jason Hart, and the meeting was rounded off with a victory for the Paul Midgley-trained Merry Banter who led all the way under claimer Ben Robinson to win the Watch Race Replays At racinguk.com Handicap Stakes.