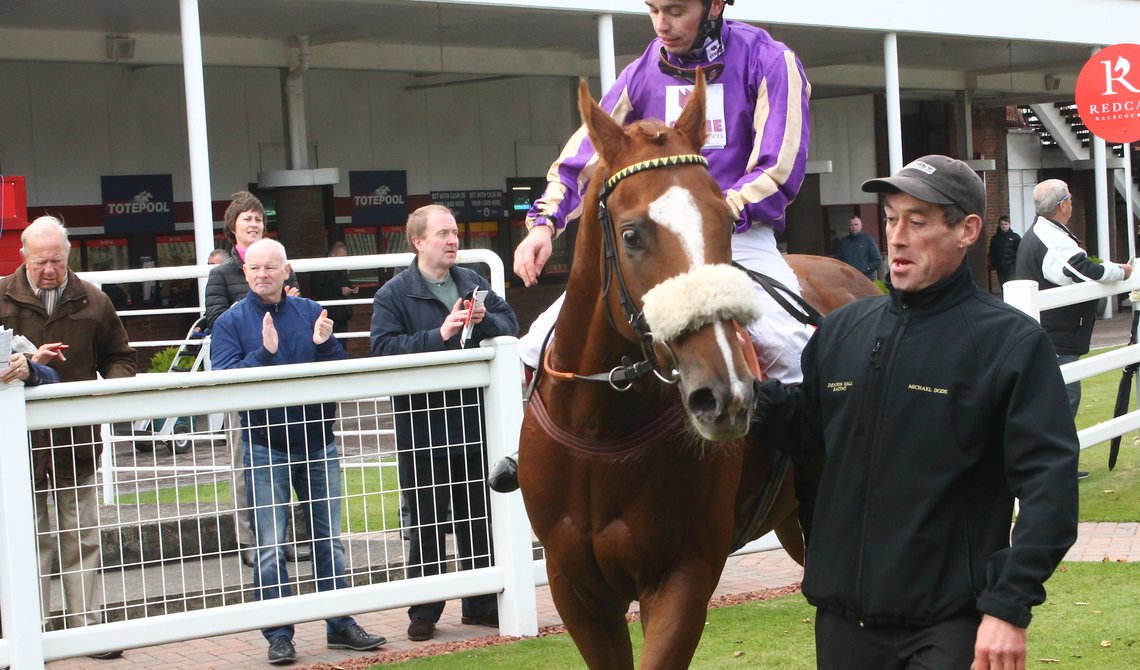 SOUTHERN raiders are out in force as usual at Redcar tomorrow (Thursday, May 2) but local trainer Michael Dods goes into battle with some interesting ammunition.

Dods made no secret of the fact that he rates Myrmidons highly after the Casamento gelding – named after Achilles’ soldiers from Greek mythology – won on his debut over course and distance as a two-year-old.

The Denton trainer added that he thought Myrmidons, owned by Darlington businessman Dave Stone, would be better in time so he’s taken to give the others 5lbs in the Watch Irish Racing On Racing TV Novice Median Auction Stakes.

After a disappointing spell in recent weeks, Dods bounced back to form with another highly-rated horse in Pendleton at Newcastle this week, followed by 331-winner Gale Force Maya at Pontefract, and Myrmidons can prove too strong for Cristal Breeze, trained at Newmarket by William Haggas.

Dods can follow up with the progressive Dancing Boy in the Every Race Live On Racing TV Handicap. He got better with each run as a two-year-old, finishing second at Newcastle on his last two races over seven furlongs and a mile respectively. The extra two furlongs at Redcar should suit with Andrew Mullen in the driving seat.

The seven-race card gets underway at 1.55pm with the Racing TV Club Here Today Selling Stakes. Lambourn trainer Archie Watson likes a winner at Redcar and he saddles three, with debutante Gold Venture looking the likely pick under Hollie Doyle. That said, Richard Fahey throws in another interesting first-timer in Tiny Titan and the betting is worth a careful check.

Vivivaki, another Newmarket raider, trained by Robert Cowell, was a promising second in a conditions race at Ascot this time last year but has disappointed since. Pat Cosgrave takes the ride in the Follow racingtv On Twitter Fillies’ Novice Stakes and this could be her opportunity if reproducing that Ascot run.

Country, a handsome son of Dubawi, was an impressive winner for William Haggas at the last Redcar meeting and the sire might well follow-up with Saeed bin Suroor’s Gentle Look in the Racing TV Profits Returned To Racing Handicap. The gelding was fourth at Windsor on his only run this term and should strip fitter this time, with James Tate’s Solar Heights – an £85,000 yearling and a winner on the all-weather at Chelmsford in March – a clear danger.

Hollie Doyle is always a popular visitor to Redcar and she has a good chance of victory in the Watch Racing TV In Stunning HD Claiming Stakes. This won’t take a lot of winning and Doyle’s mount Clayton, trained in Lambourn by Archie Doyle, showed he’s up to the mark when going clear in a seller last time at Musselburgh.

The meeting ends at 5.10pm with the Go Racing At Thirsk This Saturday Handicap and North Yorkshire trainer Roger Fell could have the answer in Kodi Dream who didn’t get a clear run and only just failed to peg back Jedd O’Keeffe’s Anna Bunina at the last Redcar meeting.