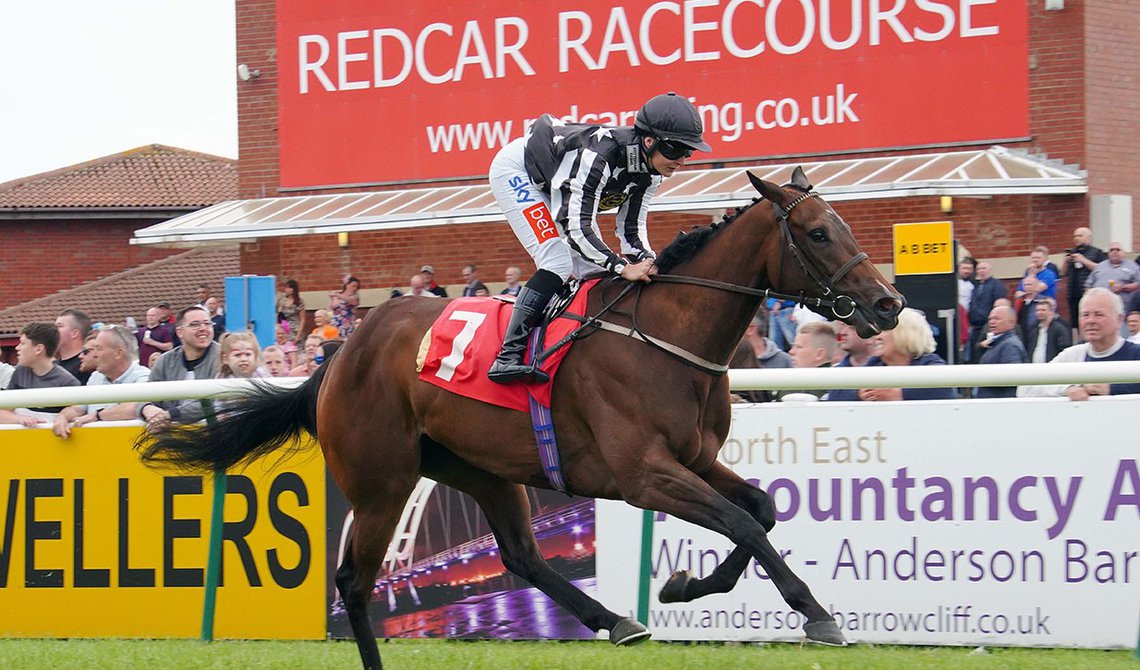 JOCKEY Joanna Mason was all smiles at Redcar today as she rode her 100th career winner on Ladies’ Day – riding a horse trained by her grandad and uncle.

And it could hardly have been easier as Grantley Hall, trained at Malton by Mick and David Easterby, cruised home in The racingtv.com/freetrial Restricted Novice Stakes.

Jo said: "That's for Grandad! He's always given me a lot of support and it's the perfect way to do it - especially on Ladies' Day." 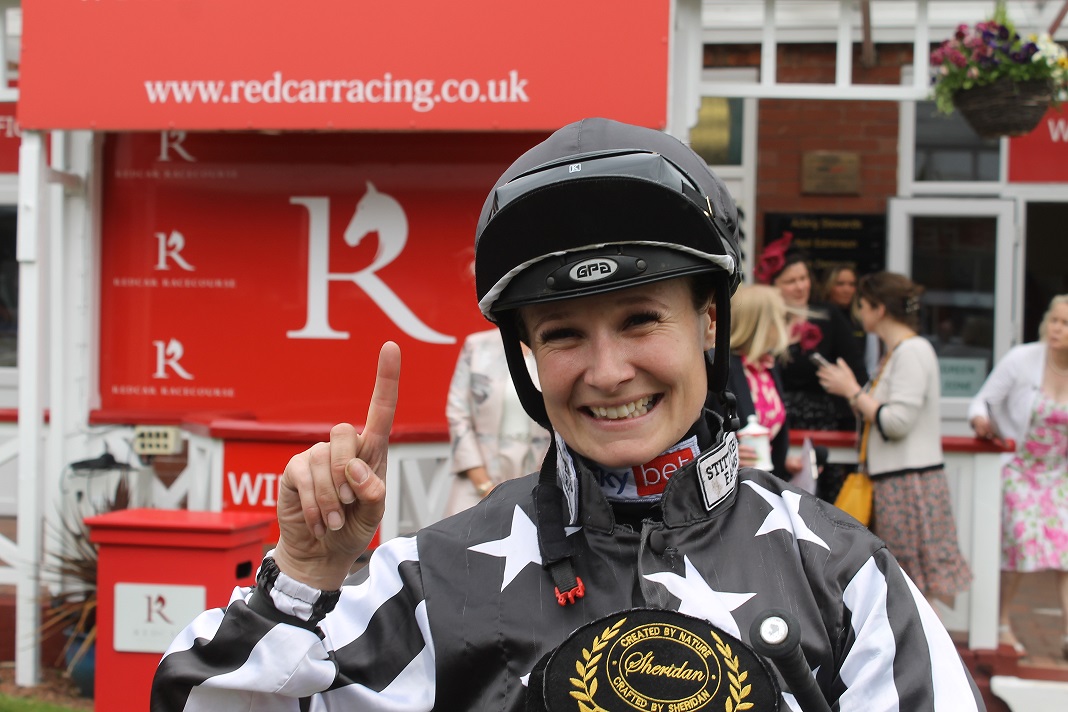 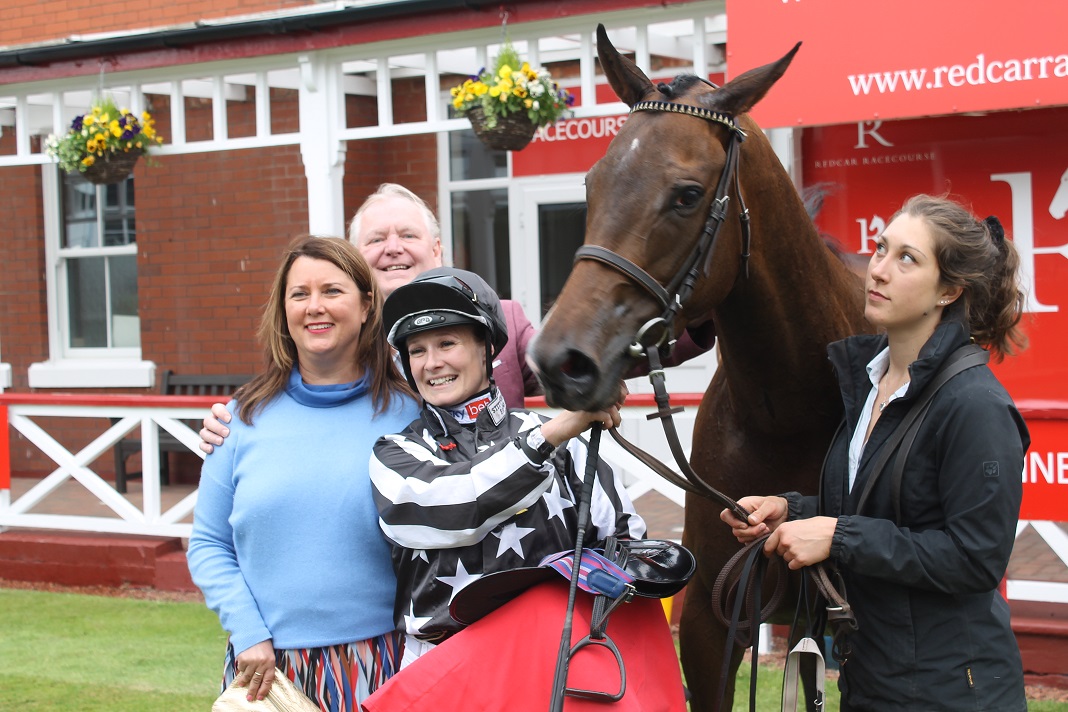 David Easterby added: "It's fantastic. She doesn't get the rides because she's related to us - it's because she's the hardest worker. If she wasn't, Dad wouldn't put her up."

David believes the horse is capable of winning Grade 2 handicaps and could be one for Glorious Goodwood next season.

Jo had hoped to reach her century earlier on the card when the Ruth carr-trained Hostelry was warm favourite to land the Racing TV Free For A Month Maiden Handicap. However, the mare was was outgunned by Ron O (below), handled by Les Eyre, at Beverley, and ridden by Lewis Edmunds. 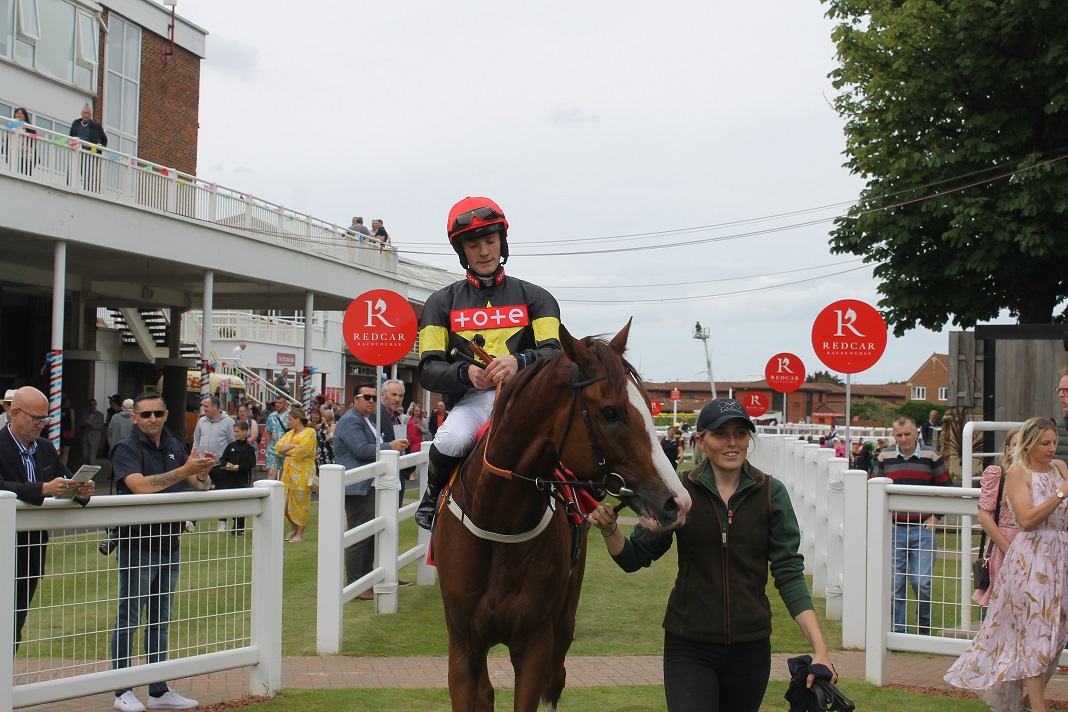 The day got off to a good start for favourite-backers when Sound Pressure (below), ridden by Shane Gray won the opening British Stallion Studs EBF Novice Stakes for Middleham trainer James Horton and owners John and Jess Dance. However, he was made to fight hard by Tim Easterby’s Braveheart Boy. 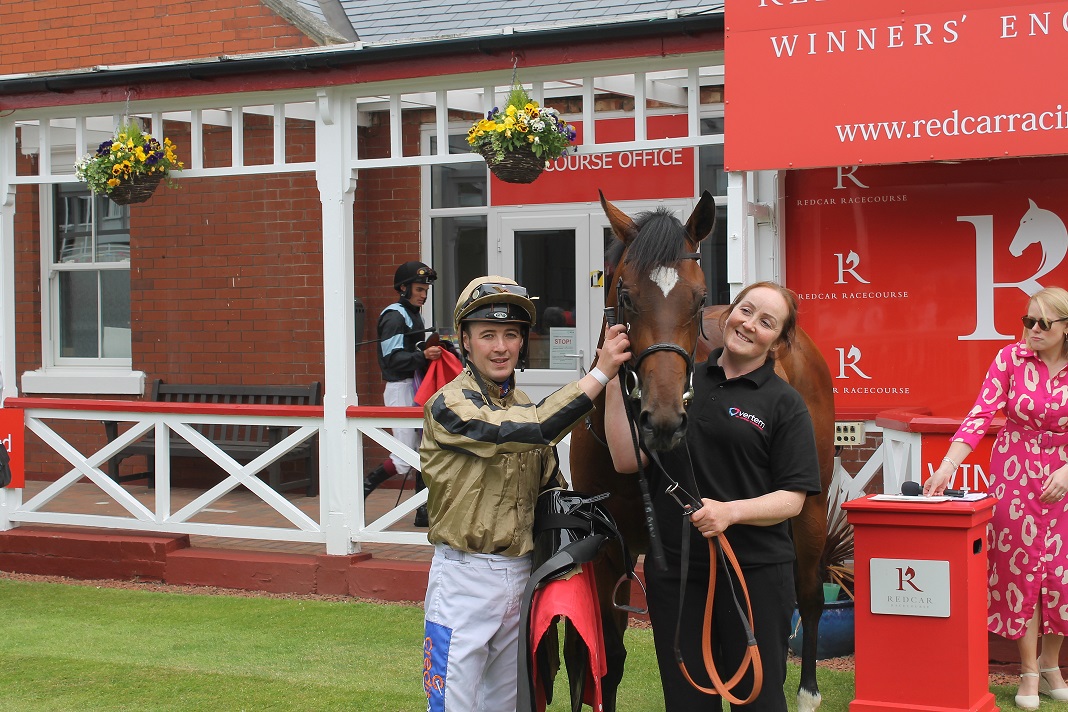 There was a winner for Leeds United fans in the Start Your Racing TV Free Month Now Handicap, when Hellenista (below) battled back from looking beaten under David Allan.

The Nathaniel filly is owned by the ALAW syndicate, which stands for ‘All Leeds Are We’. Graham Smith, one of the main partners in the syndicate, couldn’t be at Redcar to see the horse win because he was on a charity bike ride.

Trainer Tim Easterby said: “She’s bone idol. She doesn’t do a stroke until she has to."

North Yorkshire struck again when Tammani (below), trained at Upper Hemsley by David O'Meara and ridden by Alistair Rawlinson, elected to take a lonely route up the far fail to land the Try Racing TV For Free Handicap. 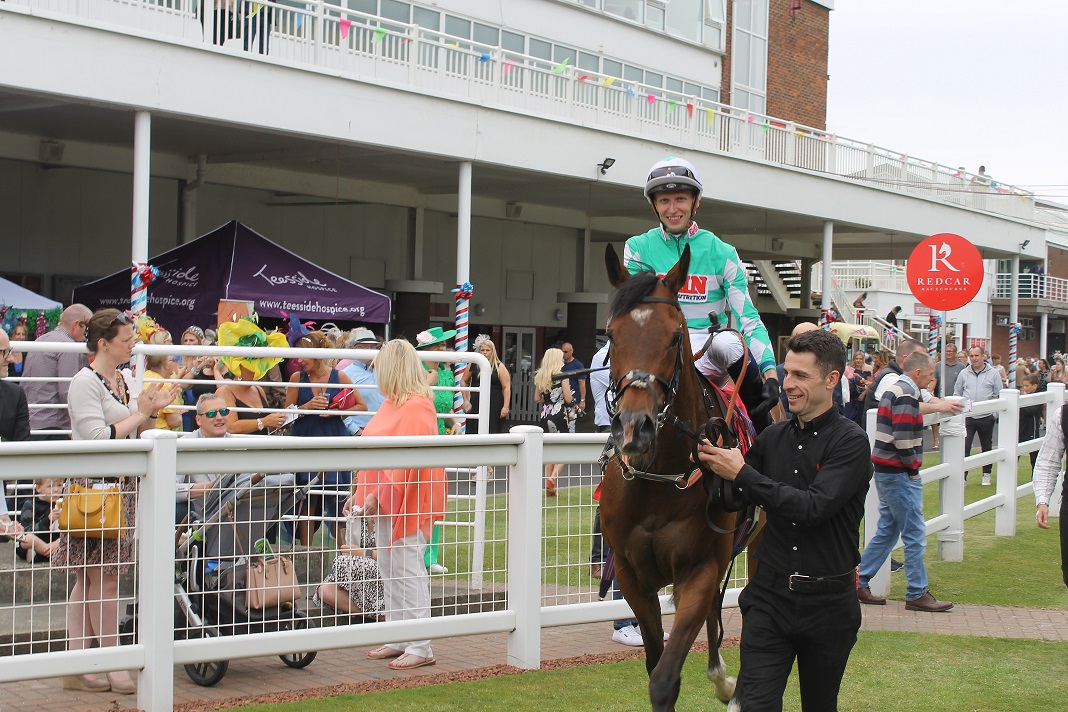 The gelding is owned by the Gallop Racing and Northern Monkeys syndicate. Most of the members are having a trip to Royal Ascot but they were represented by Gary Downes, of Thirsk.

He said: "I was expecting that and couldn't believe his price. The jockey said he'd been told by the trainer to stick to the far rail because he likes to work by himself at home. It's clearly worked! He's a class horse and can go on to better."

Texas Man (below), trained at Westow, by Paul Midgley, and ridden by David Nolan, never look like losing with an authoritative win in the Market Cross Jewellers Handicap. 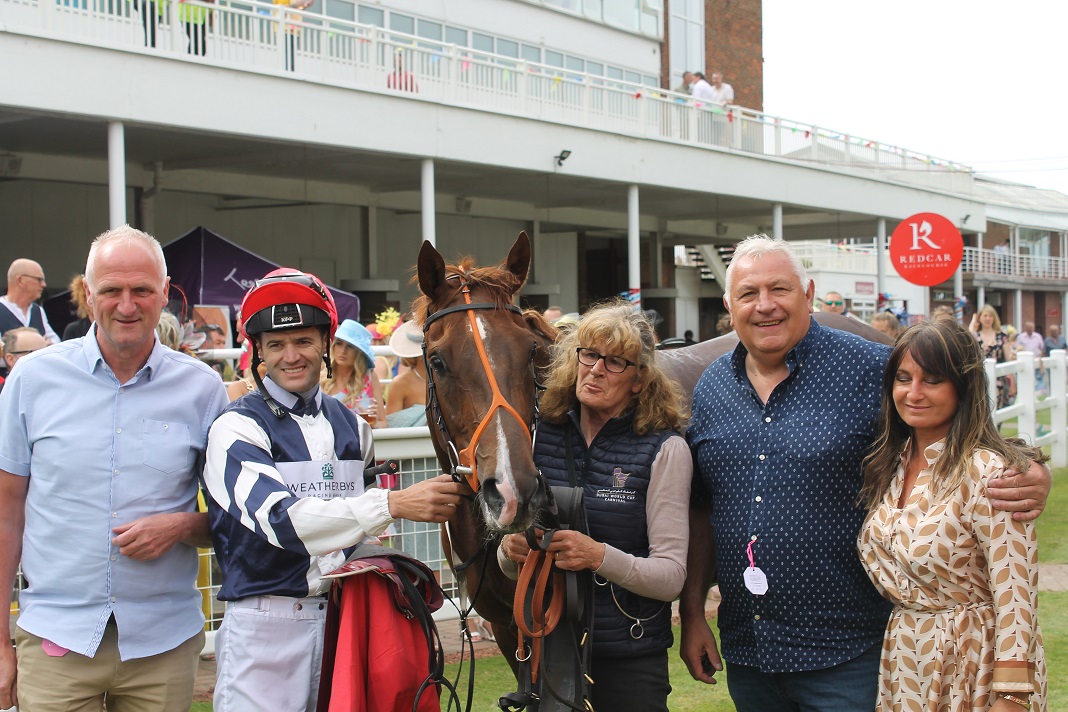 Owner Kevin Harle, of York, said: “We were expecting  to win last time out at Musselburgh but he didn’t get out of the stalls, so we were anticipating a big run here. I never had any worries during the race.”

Ladies’ Day ended with a win for Spennymoor trainer Tracy Waggott, and a pot of gold for outsider-backers as 331-1 shot Rainbow Rain (below) landed the Watch Race Replays At racingtv.com Handicap under a strong ride from James Sullivan.

The trainer said: "He had a bad draw at Pontefract last time and ran well in the circumstances, and I thought the first-time visor would wake him up." 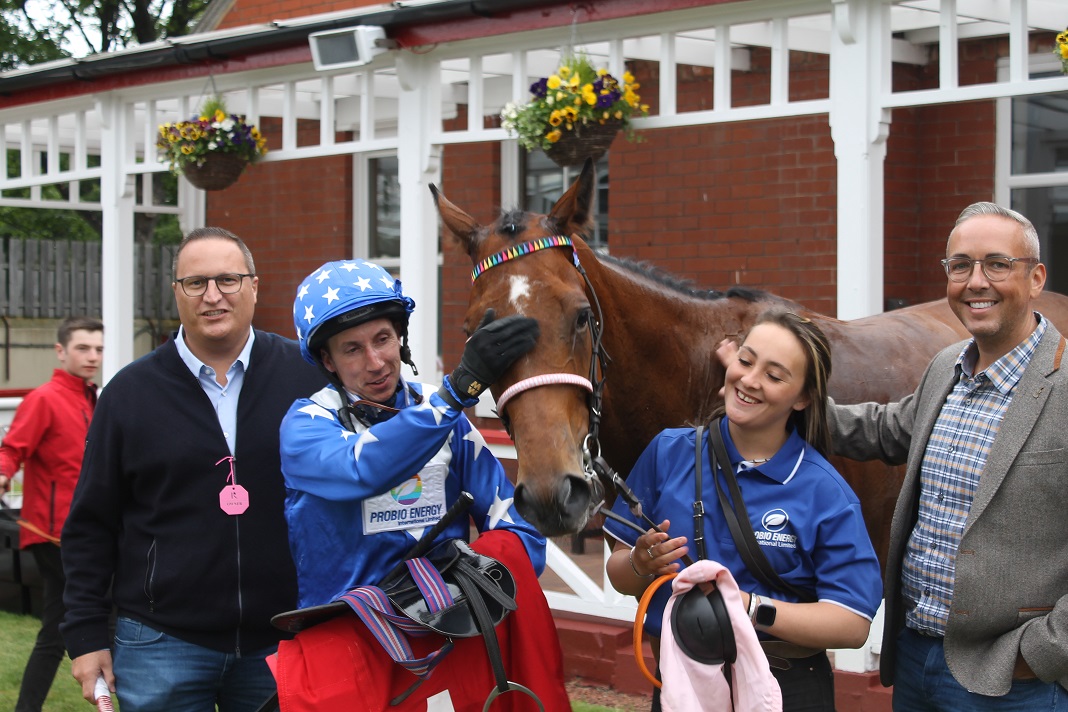