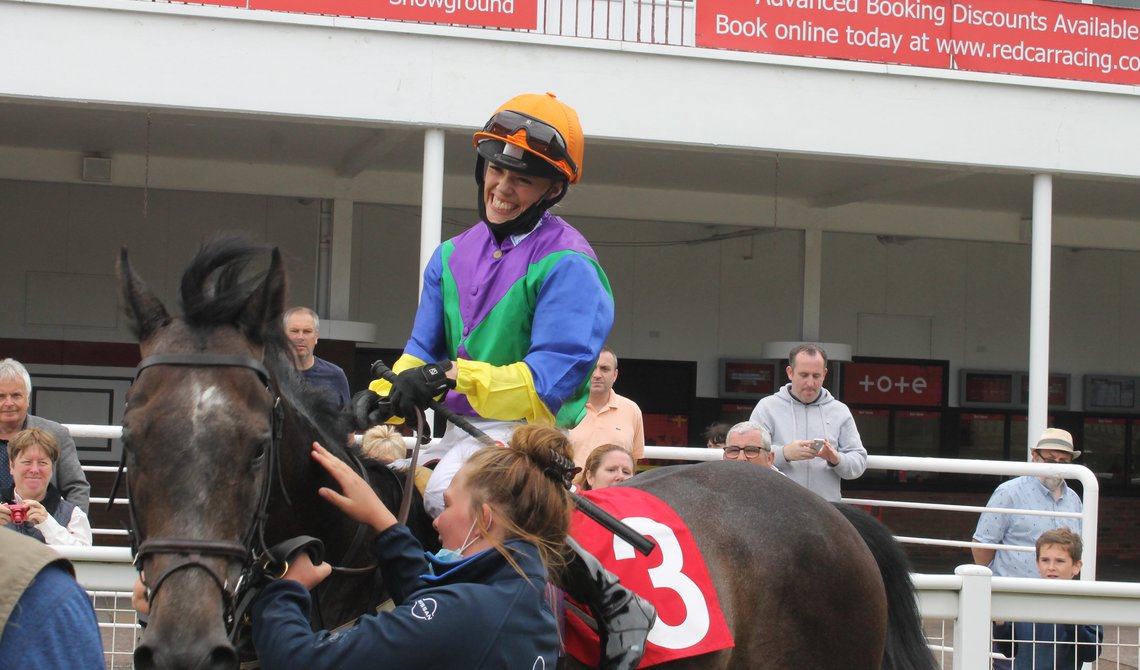 JOCKEY Faye McManoman hadn’t ridden a winner at Redcar before today – but her smile lit up the seaside track after landing a double for Malton trainer Nigel Tinkler.

Indeed, it was the 3lb claimer’s first double anywhere as she celebrated victories on Imperium Blue (main picture) and Truth In Jest.

"It's what dreams are made of – you couldn’t write it," said Faye. “I’m very grateful to Nigel for putting me up on these good horses – I’m very lucky.”

The double was sealed in the final race when Truth In Jest beat Davin O’Meara’s Cometh The Man by a head in The racingtv.com/freemonth Handicap. Tinkler suggested the Mayson gelding could be out quickly at Doncaster next week. 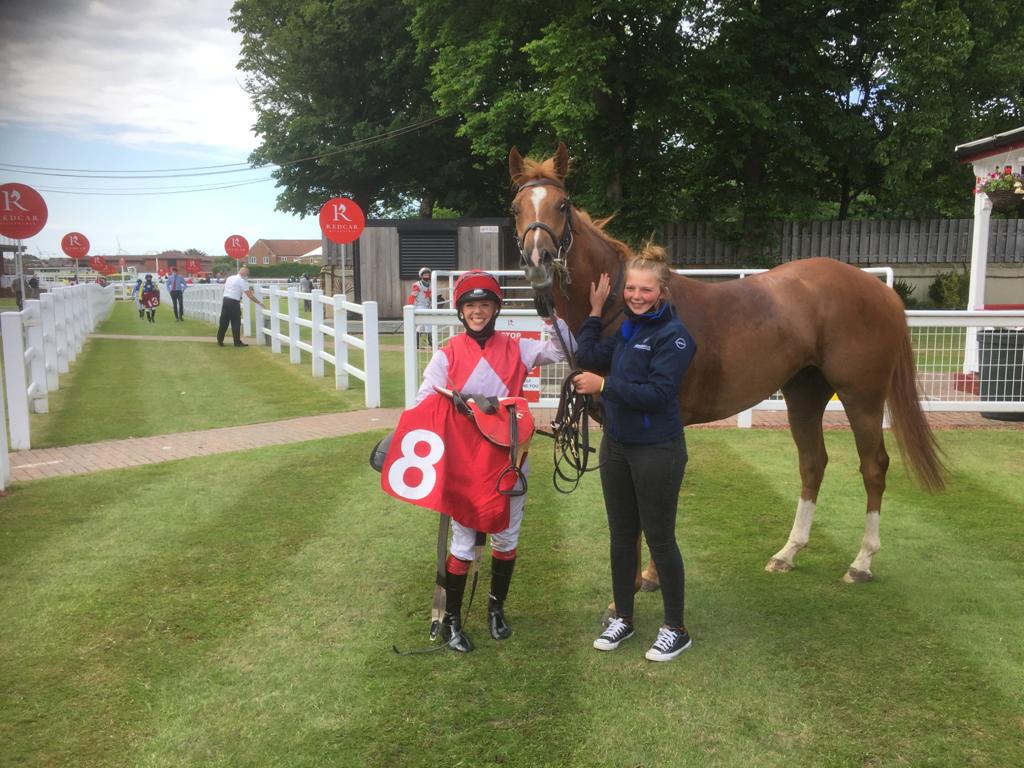 Imperium Blue’s victory came in The Market Cross Jewellers Handicap for owners Ian and Pam Bendelow. The couple’s other horse, Prodigious Blue, had come third in the first race and they were thrilled to be in the winner’s enclosure with Imperium Blue, who won in a fast time.

Mr Bendelow explained that the horse wouldn’t have even been with Tinkler if it hadn’t been for Covid-19: “He was with Jamie Osbourne down at Lambourn but the 240-mile round trip was too much during the pandemic, so we switched to Nigel who’s based two minutes from where we live.

“Imperium Blue was primed for this race and we’re looking forward to running Prodigious Blue at Glorious Goodwood and the Ebor meeting at York.” 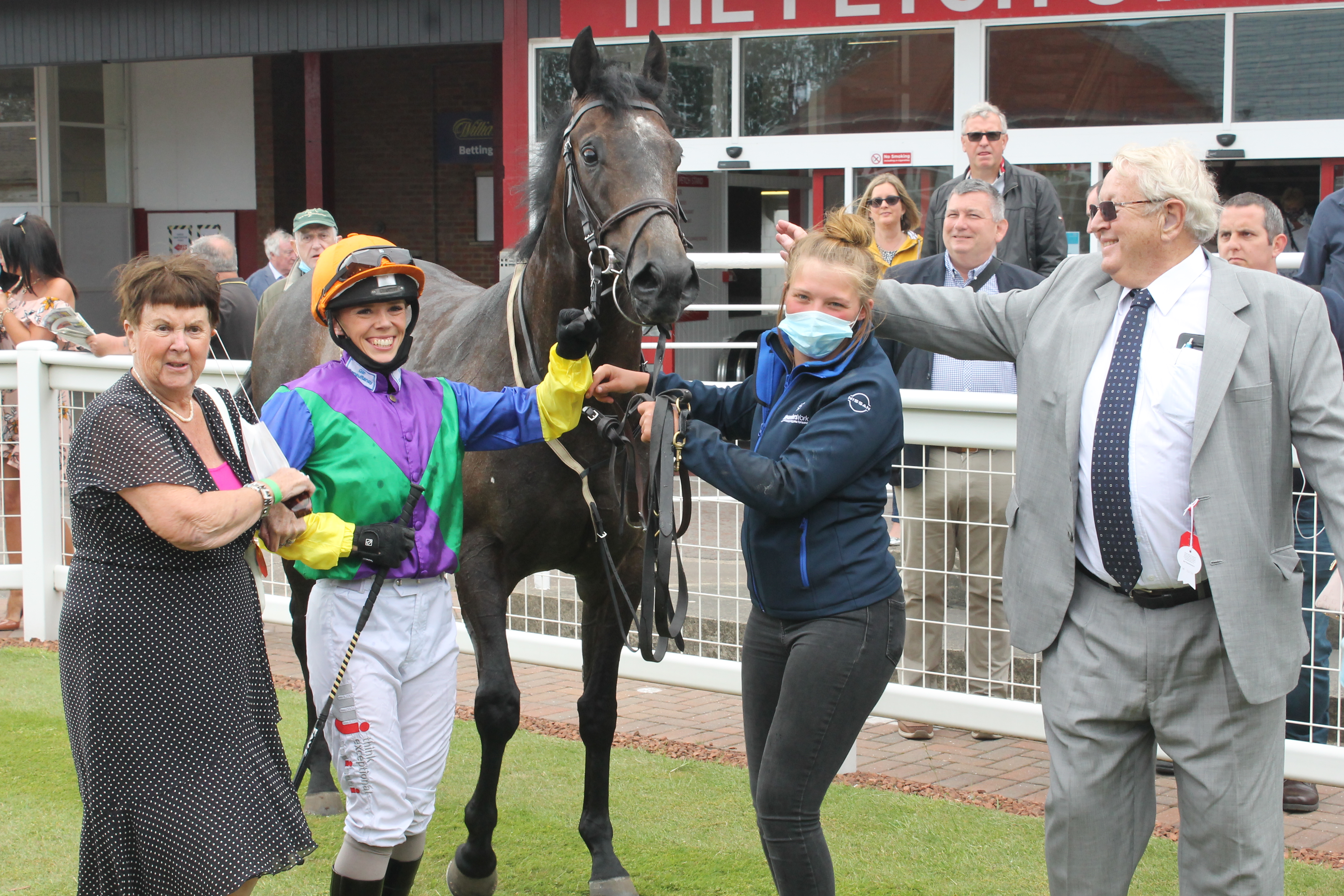 There was another double for a North Yorkshire jockey and trainer combination when David Allan and Tim Easterby scored with Flippin’ Eck and Cruyff Turn.

Allan performed miracles to win the opening British Stallion Studs EBF Novice Stakes on Flippin' Eck – because he had to ride without reins for the last furlong.

They got snagged under his knee, so he dropped them, and still won on the horse, owned by Nick and Lena Rhodes, who also have multiple winner Eeh Bah Gum.

Watching a reply of the race, Assistant Trainer William Easterby said: “David’s done a fantastic job to win in those circumstances.”

Flippin’ Eck was bought at the Goffs Sale as a yearling and William said: “He’s a very laid-back horse at home and it’s taken a few runs for him to wake up. It’s great to win for such nice people who are great supporters of the yard.”

The Yorkshire couple have already registered the name for their next horse: “It’ll be called Buggerlugs!” revealed Nick, paving the way for some interesting commentary when the time comes. 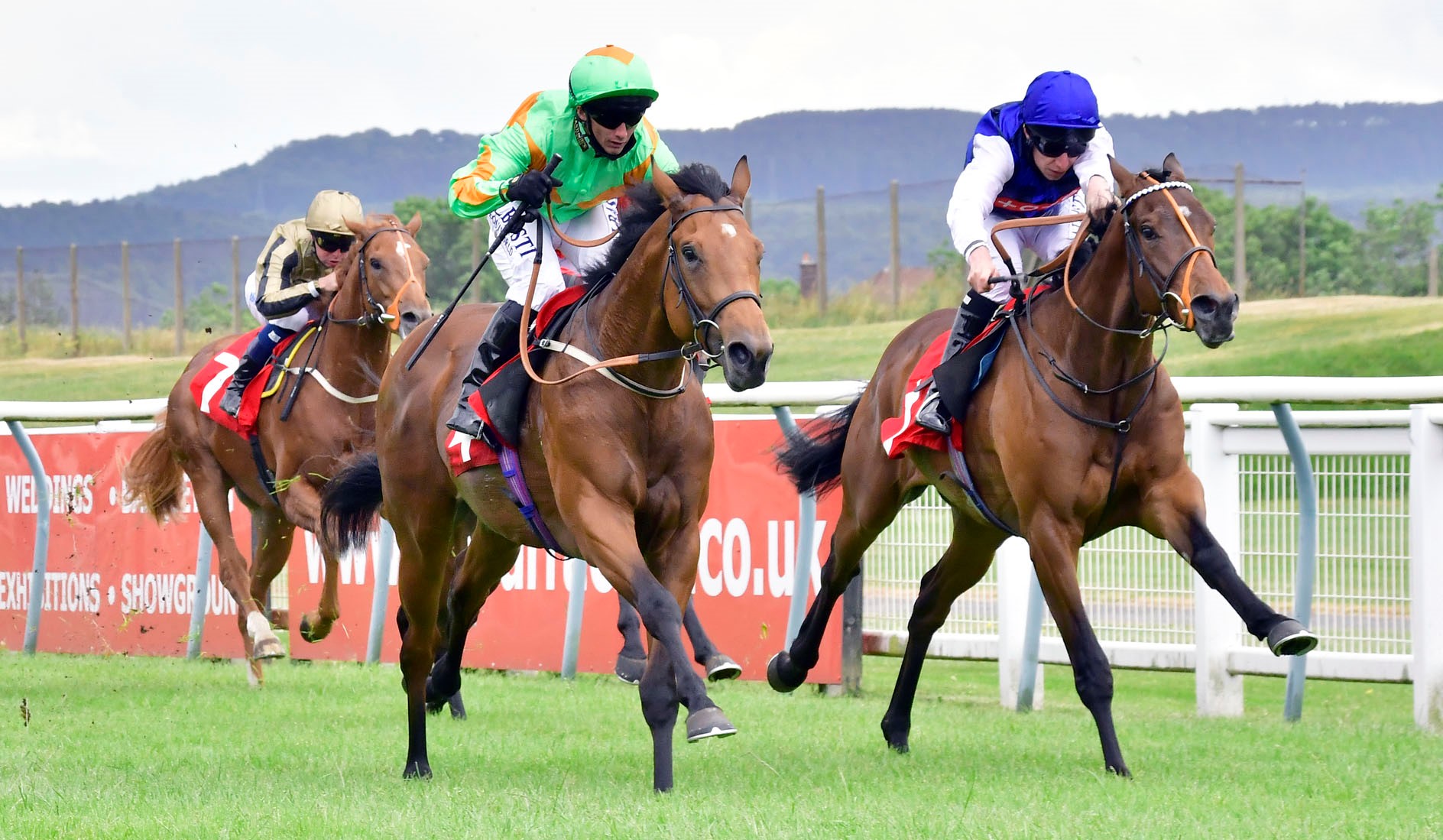 Cruyff Turn, an appropriate winner in the midst of Euro 2020, looked impressive in landing the Free Month of RacingTV Handicap and will now be aimed at The Bunbury Cup at Newmarket.

The Dutch Art gelding, who was winning for the third time, is part-owned by Andrew Gemmell, who has been blind since birth, and is the well-known owner of popular hurdler Paisley Park.

William Easterby bought the horse as a yearling from Cheveley Park. “He was leggy, weak and backward but from a lovely family. He’s been running over a mile, and a mile and a quarter, and we thought he wanted soft. It turns out he loves fast ground and seven furlongs looks his trip. It’s lovely to have winners for Andrew who’s so passionate about the sport.” 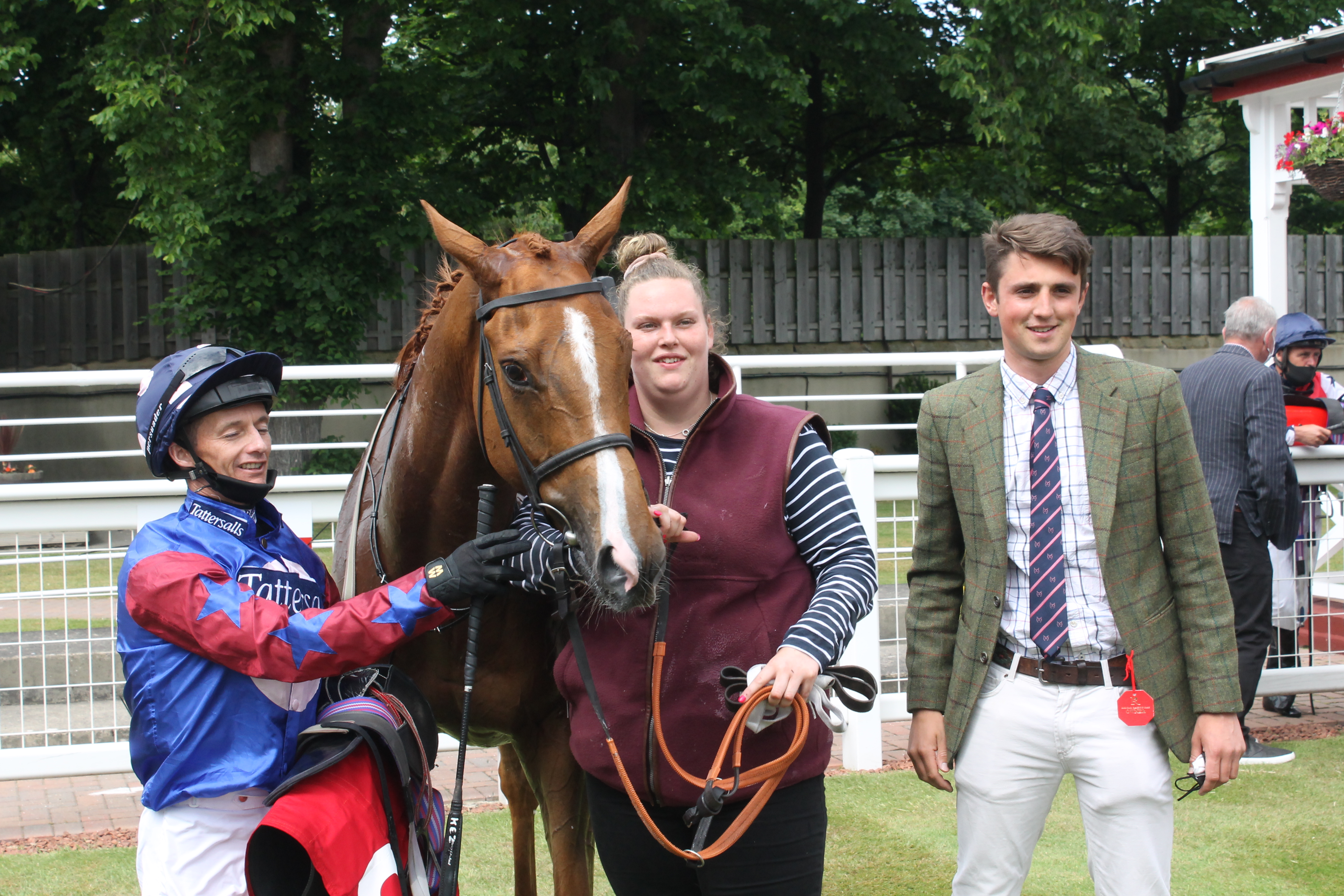 In-form Paul Mulrennan rode a Redcar double on Friday and he was back in the winner's enclosure with Cleveleys, trained by Michael Dods, after the Visit Redcar Car Boot Tomorrow Novice Median Auction Stakes.

Dods’ travelling head lad, Kenny Williams, said: “He’s run some good races but he wasn’t concentrating so we put the blinkers on and they’ve done the trick.” 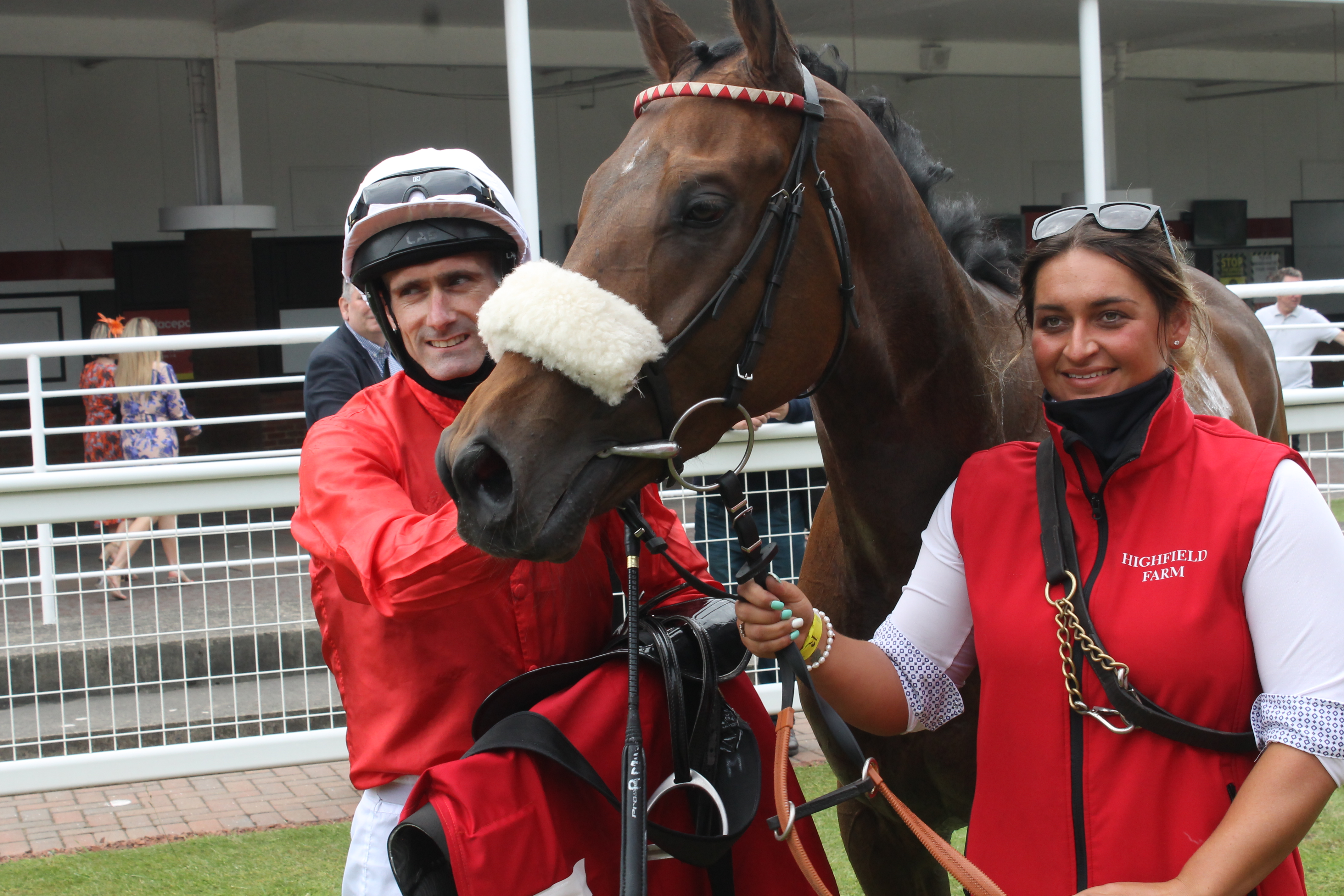 Photograph, trained at Malton by Declan Carroll and ridden by Harrison Shaw, clicked by taking The Racing TV Free For A Month Maiden Handicap –in a photo-finish!

The Kodiac gelding was bought out of the Richard Hannon stable in October and was the 32nd winner Ray Flegg and John Bousfield have had with Carroll during a fruitful association.

Ray runs Flegg Transport in London and John has a timber merchants, Smithfield Timber, on Teesside.

The trainer said: “He really wants more give in the ground but Harrison rode in the first two races and thought we’d get away with it. He’ll improve for stepping up in trip and could be a nice horse.”

Ray said: “It’s been a fantastic partnership with John and long may it continue.” 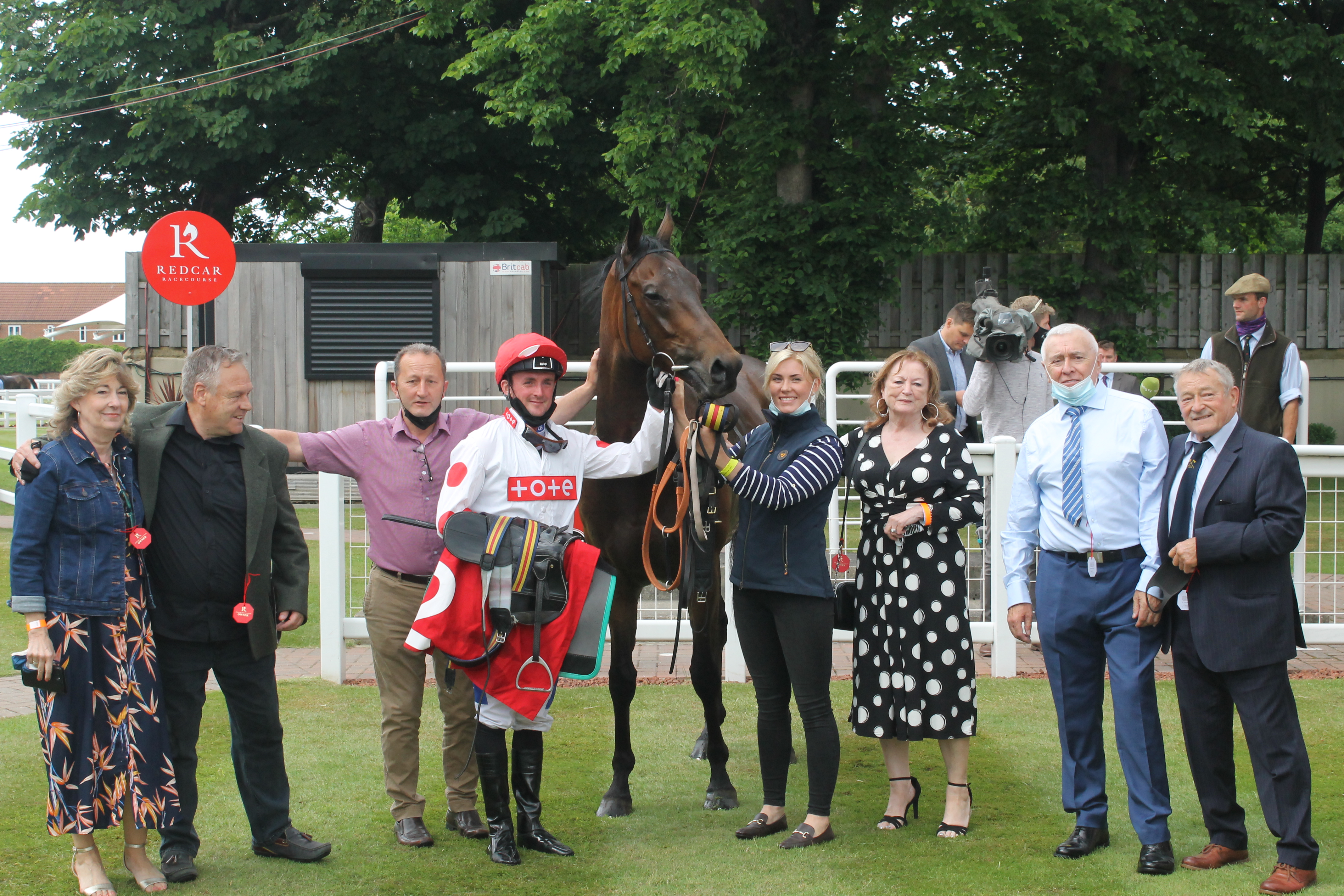 Out of Breath notched up a hat-trick of wins in The Start Your RacingTV Free Month Now Handicap Stakes for in-form trainer Grant Tuer, with five-pound claimer OIiver Stammers in the saddle.

That’s now 25 wins this season for Tuer, who trains at Birkby, North Yorkshire: “It was really tough for everyone last season but this year has been fantastic,” he said.

The trainer also talked of the “bitter sweet” decision to sell the stable’s best horse, Maison de York – a winner at Redcar earlier this season – after an irresistible offer came in from Hong Kong.

“We tried to make out a case to keep him but, in the end, it was money we just couldn’t turn down and it gives us a pot of money to go to the sales with. We’ll be looking to increase the quality and the quantity,” he said. 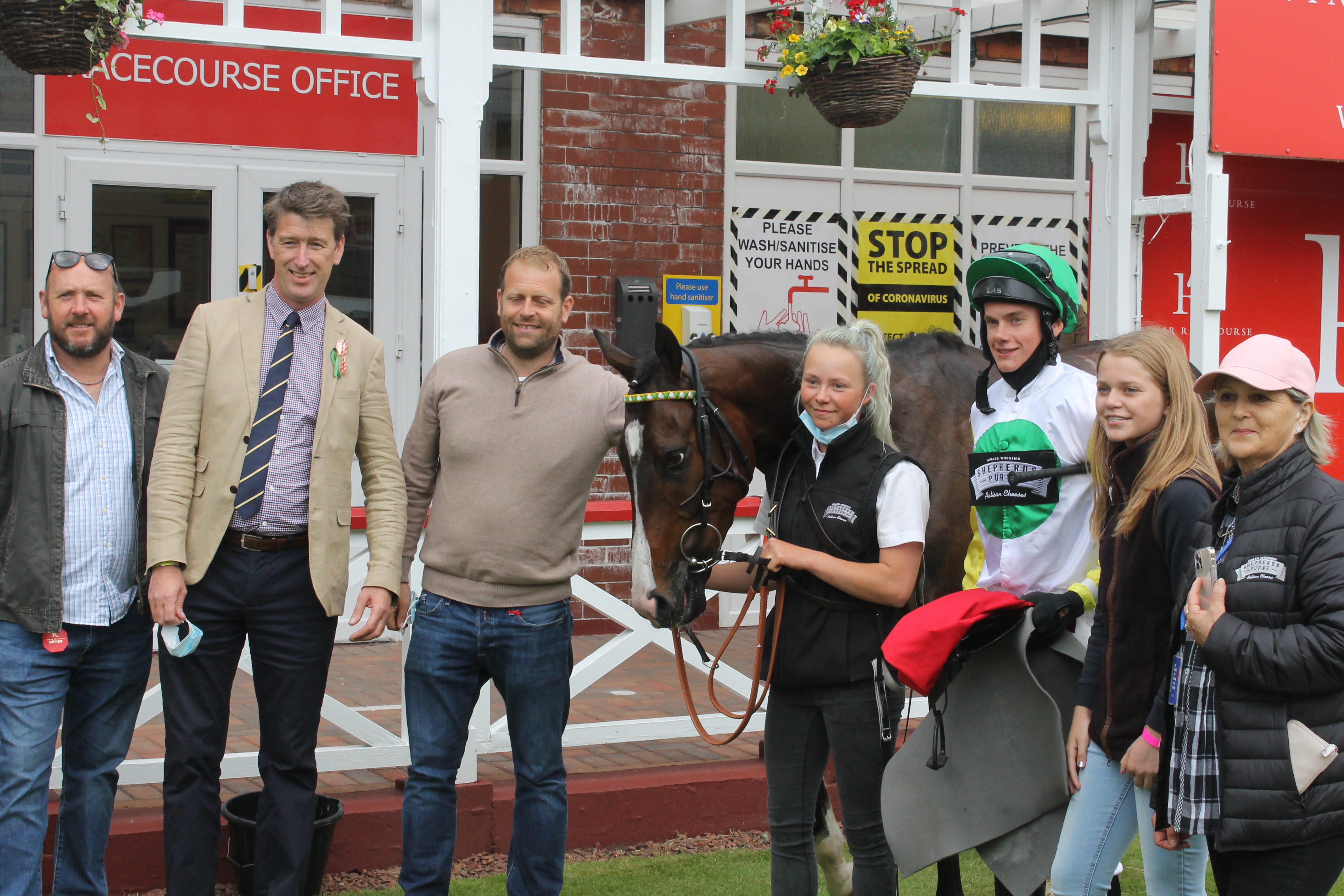