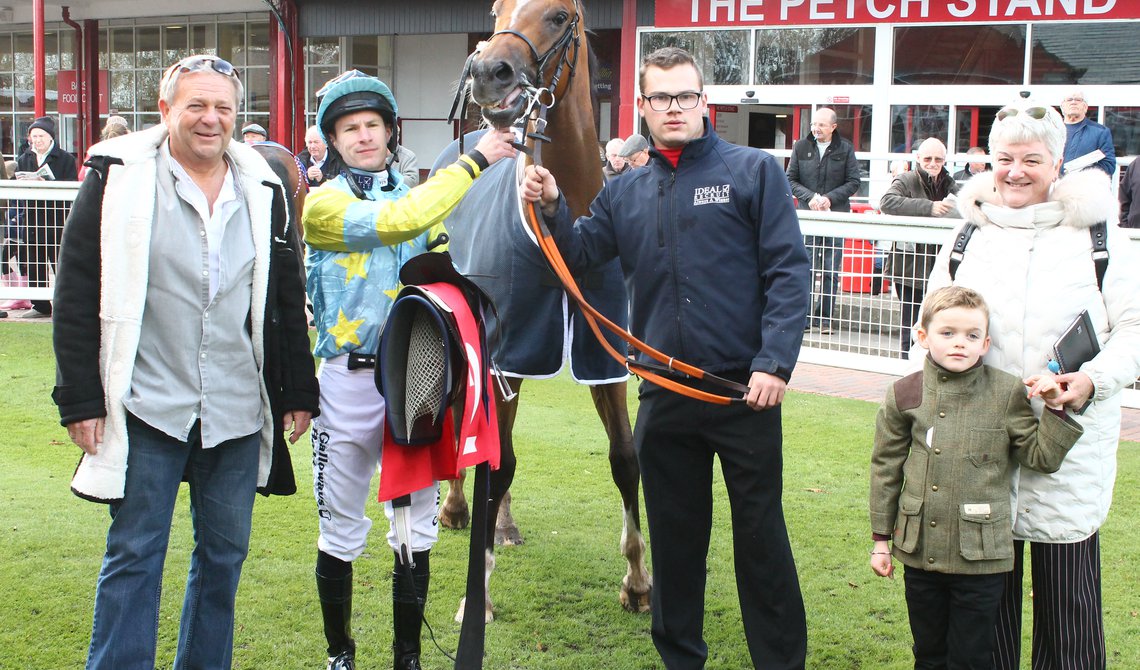 GRANDPARENTS Alan and Sue Cronshaw had a grand day out at Redcar Races today as their horse Finoah showed his class with a well-deserved victory.

Finoah, who ran a cracker to be fifth in Redcar’s most valuable race, the Two-Year-Old Trophy recently, is named after the Manchester couple’s two little grandsons Finley and Noah.

Noah was with his grandparents to see the Tom Dascombe-trained two-year-old make all under Richard Kingscote in the British Stallion Studs EBF Novice Stakes, but Finley missed out because he had to go to school.

Alan, who runs a company supplying building materials worldwide, said: “He carried 9lbs more than the winner in the Two-Year-Old Trophy and has run other good races behind high-class horses, so he deserved this. He’s a proper horse and Tom is sure he’ll improve next season.”

Michael Dods’ Pendleton ran a solid race in second, finishing well clear of the rest, and looks like one for the notebooks.

It was also a memorable day for former champion apprentice Jason Hart, who scored a double. His first came on Malton trainer John Quinn’s Acadian Angel in the Racing UK’s Biggest Ever Flat Season Selling Stakes and he was again shown to good effect on Make Me in the Watch Racing UK In HD Maiden Stakes.

Make Me is trained by Redcar’s top trainer for 2018, Tim Easterby, who was represented by Keith Stone. He said: “I can’t believe he hasn’t won before now, but Jason thought this would be his best trip and he’s a nice horse who’ll progress next year.”

Keith Dalgleish, who trains in the Scottish borders, is having a season to remember at Redcar. His Summer Daydream won the £175,000 Two-Year-Old Trophy at the start of the month and he had another nice winner when Dark Lochnagar took the EBF Double Trigger Novice Stakes.

It’s the second year in succession that Dalgleish has won the race named in honour of the great stayer trained by his old boss Mark Johnston.

Callum Rodriguez is making the most of his opportunities after riding out his claim this season and he rode another confident race on Dark Lochnagar.

The last three runners sent to Redcar by Middleham dual-purpose trainer Stef Keniry have all won, with the hat-trick being sealed by Gilmer, ridden by five-pounds claimer Jonathan Fisher in division two of the Racing UK Profits Returned To Racing Apprentice Handicap Stakes.

Stef said: “He was the first horse to ever win in my colours so he’s my pride and joy. He’ll go on his holidays now.”

Division one was won by Antony Brittain’s Lucky Lodge, in the hands of Kieran Schofield, who outbattled Cieren Fallon on Someone Exciting.

Grand National-winner jockey Graham Lee was in the winner’s enclosure after Mick Channon’s Billy Ray made the long journey from Berkshire pay off in the Market Cross Jewellers Handicap Stakes.