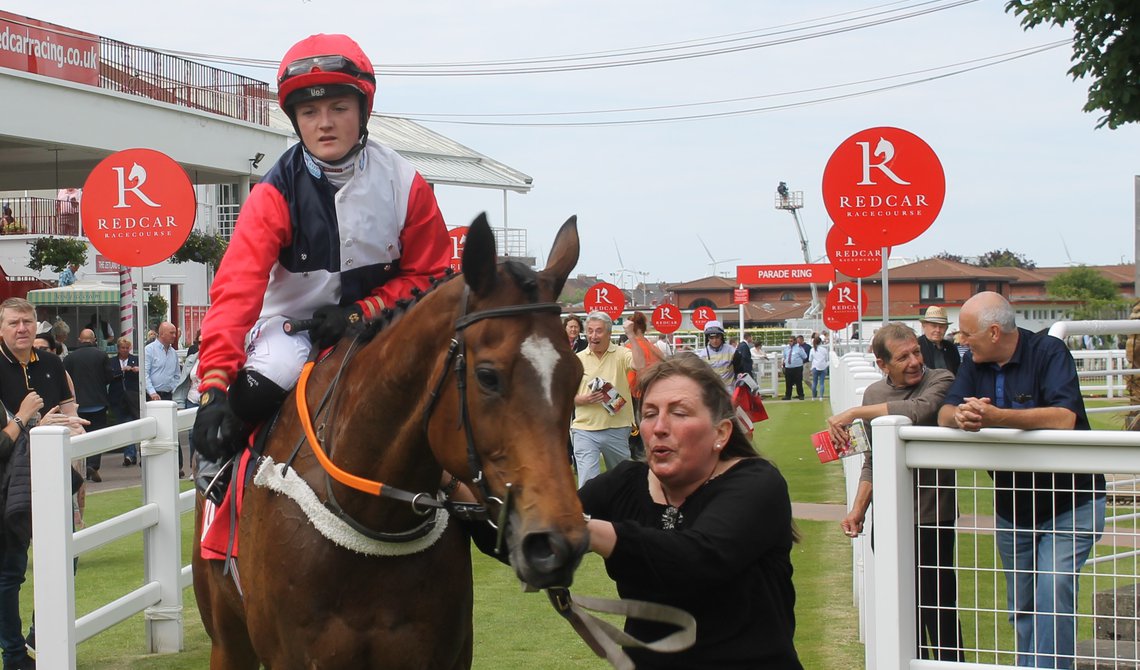 LADIES’ Day at Redcar had its own leading lady in the diminutive form of Hollie Doyle today.

The popular rider bagged a double in the first two races, starting with hot favourite War Storm for Lambourn trainer Archie Watson in the Chic Hats EBF Novice Stakes. Despite the colt being odds-on, Doyle had to display all her strength to get the better of Paul Mulrennan on Cruising.

Doyle outgunned Mulrennan again in the next race, with Nearly There, trained in County Durham by Wilf Storey, staying on well to beat Angel Gabriel by half a length.

Veteran trainer Storey was quick to praise Doyle afterwards: “She’s a great jockey – horses run for her and she’s got a good head on her shoulders. I honestly can’t fault her,” he said.

Doyle was denied a hat-trick by a nose when Mick Channon’s Quirky Gertie just failed to catch Fashionesque, trained at Newmarket by Rae Guest and strongly ridden by Connor Beasley. The winner was a popular choice among many of the ladies who had turned out in their glad rags.

Raydiance, trained at Leyburn by Karl Burke and ridden by Clifford Lee, is bound for the Bunbury Cup at Newbury on July 13 after narrowly winning the H. Jarvis 141st Anniversary Handicap Stakes from another Wensleydale charge, James Bethell’s Ulshaw Bridge.

Adam Hilton, spokesman for the winning Ontoawinner syndicate, said: “We wanted it softer because he’s really a heavy ground horse, so we weren’t that confident. He’s been working well so we’ll be praying for rain ahead of Newbury.”

North Yorkshire struck again in the Market Cross Jewellers Handicap Stakes when Get The Rhythm, trained by Richard Fahey and ridden by five-pound claimer Connor Murtagh, got up close home to beat Nigel Tinkler’s True Hero.

Tina Jackson said after Glaceon’s victory: “She’s a lovely filly. It was a bit frustrating that she hadn’t won before now but, hopefully, she’ll kick on and get a mile and a quarter. It’s always nice to come to Redcar as our local track and the bonus is that it doesn’t take us long to get home!”

PICTURE: Hollie Doyle returns to the winners' enclosure on Nearly There