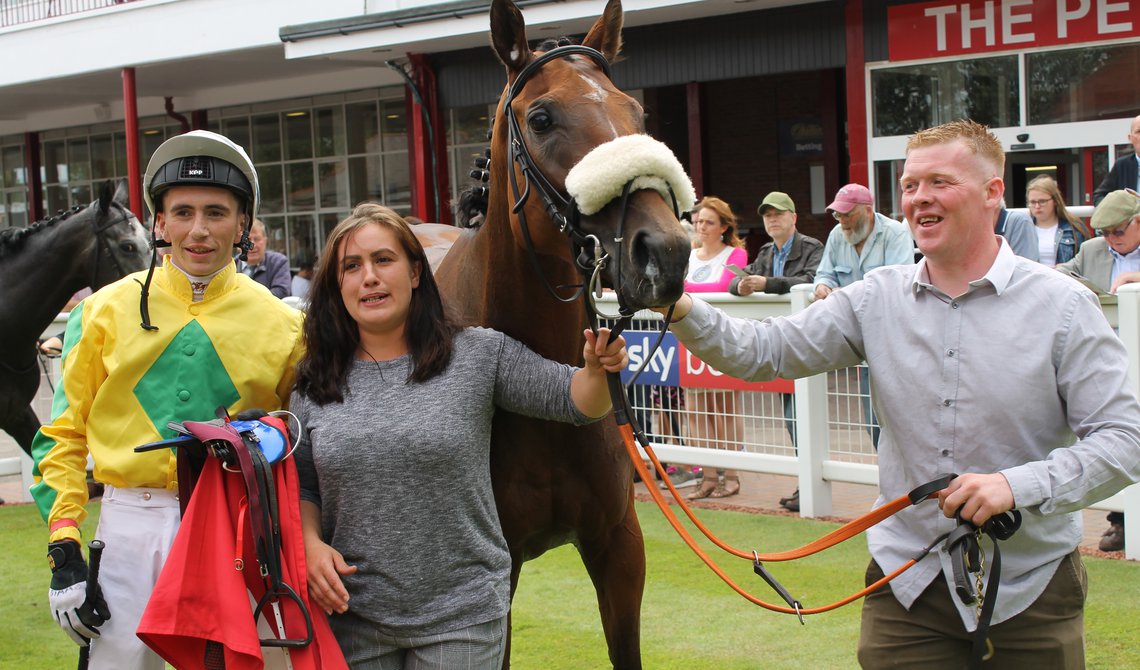 IRISH trainer Katy Brown was planning to head back home to County Kildare tonight (Sunday) – but changed her mind after Effernock Fizz romped home on the second day of the Go Racing In Yorkshire Festival at Redcar.

“I think we’ll be reviewing our plans now and having a drink before going back in the morning,” said Katy after the four-year-old dual-purpose mare had triumphed under five-pound claimer David Simmonson in the Celebrate The Life of Peter Chapman Handicap Stakes (Division Two).

The trainer had set off from home on the 4am ferry on Friday and ran two-year-old Petite Steps at Ripon on the opening day of Yorkshire’s summer festival.

“She missed the break and just never travelled but we were hopeful that Effernock Fizz would make up for it,” she said.

She revealed that the mare had been treated for sinus problems before winning consecutive hurdle races at Tipperary and Wexford.

“The owner’s goal was to win on the flat and we were already coming over with Petite Steps so the Redcar race looked ideal,” said Katy. “It’s really hard to find a nice level course in Ireland but Redcar is a lovely track and it really suited her.”

Middleham maestro Mark Johnston looks to have an exciting prospect on his hands with Derby entry Thunderous who defied a 7lbs penalty in good style under Joe Fanning in the opening SkyBet Britain’s Most Popular Online Bookmaker EBF Novice Stakes.

The Night of Thunder colt had won unchallenged on his debut at Doncaster and showed a great attitude to follow up ahead of Richard Fahey’s Saint of Katowice. The pair finished seven lengths clear of third placed Arthur’s Court and Thunderous looks a horse with a future.

Johnston said: “That was very pleasing but there are no immediate plans. He’s quite laid back at home, so he doesn’t stand out from the crowd, but he’s clearly very capable. It’s a case of so far so good.”

There was also a double for Hawick trainer Alistair Whillans, starting with Firsteen, ridden by former champion jockey Paul Hanagan, in the Jacks Coaches Handicap Stakes.

A superb ride by last year’s Yorkshire champion apprentice, Kieran Schofield, secured the double for Whillans in the final race on the card, The Go Racing In Yorkshire Future Stars Apprentice Handicap Stakes. Schofield looked beaten a furlong out but galvanised Donnachies Girl to regain the lead from Jan De Heem close home.

The remaining Help For Heroes and Royal British Legion Classified Claiming Stakes produced a thrilling finished with Anif, trained in Wales by David Evans, just getting the better of Brian Ellison’s First Flight.