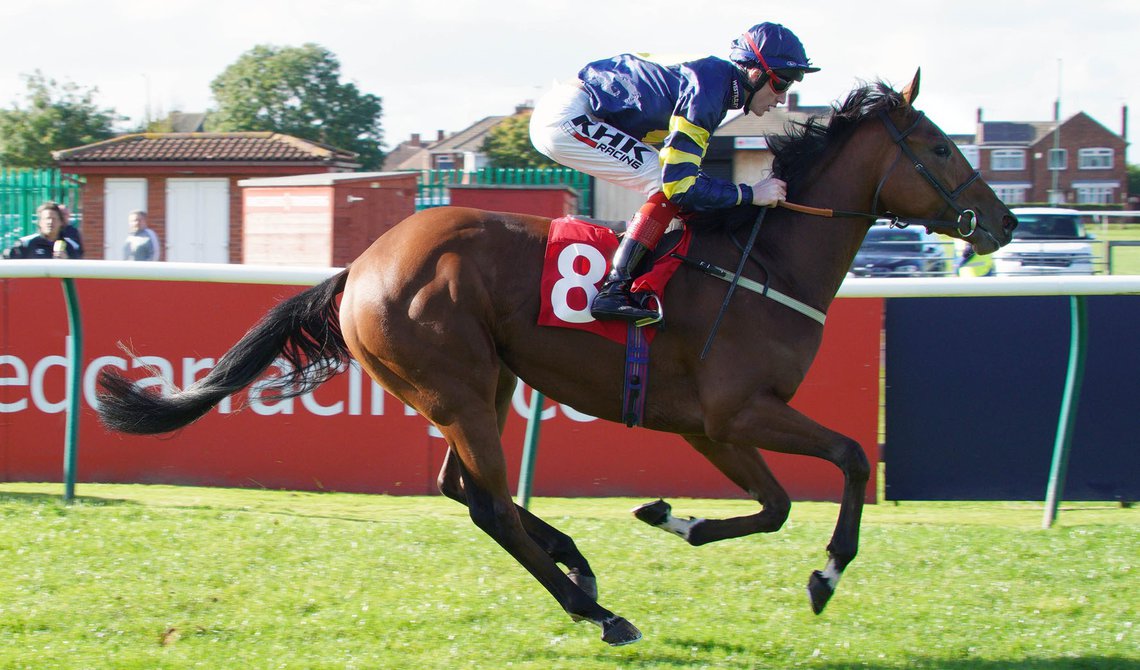 HIGH-PROFILE jockeys warmed up for Champions Day at Ascot by starring on an action-packed card at Redcar today.

David Egan, Kieran Shoemark, and Rossa Ryan all have plum rides on one of the biggest days in the racing calendar tomorrow (Saturday) and the trio mopped up four of the eight races at Redcar.

Egan, whose rides on Champions Day include Mishriff in the Group 1 Qipco Champion Stakes, led the way at the seaside when Flash Betty (main picture) – trained in Berkshire by Mick Channon – dominated from the front to land the Join Racing TV Now Claiming Stakes.

Travelling head lad, Angus Adams, said: “She did it well and it never looked in doubt. She’s probably improved for seven furlongs and could well improve again with headgear.

“It’s nice to get David off to a good start. He used to ride out for the yard as a kid because he’s dad rode a lot for us. It’s a six-hour journey up here but it’s worth it when you get a winner.”

However, Kieran Shoemark, who rides Lady Bowthorpe in the Group 1 Queen Elizabeth II Stakes at Ascot, took the Redcar riding honours with a double for Lambourn trainer Charlie Hills on Bell Shot and 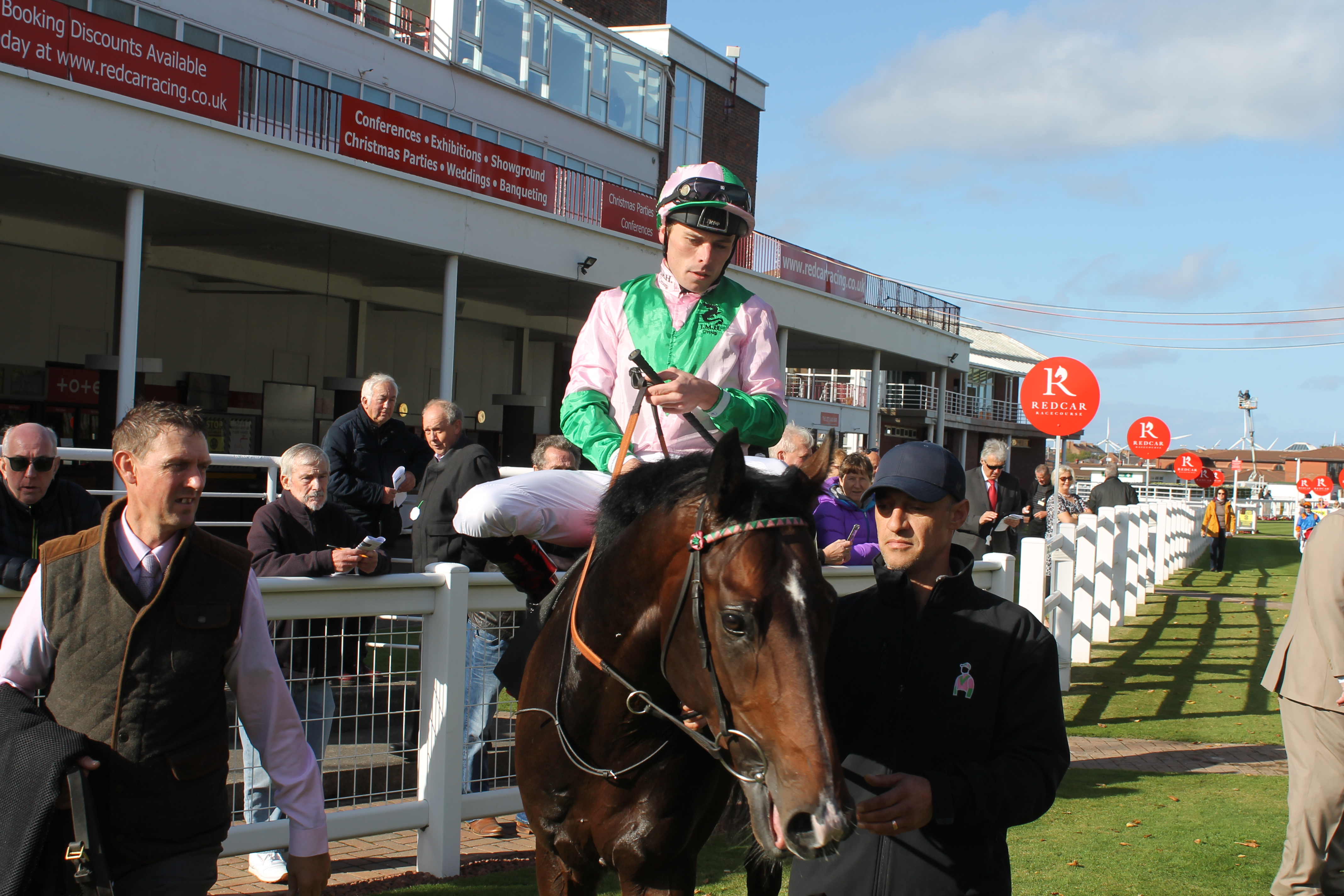 Hills’ Travelling head lad Mark Whitehouse said: “He’s only just done enough. He’s still a bit of a baby but showed a good attitude, knuckled down well, and will be a nicer horse next year.”

River Tweed (pictured below) was in full flow to secure the double in the Every Race Live On Racing TV Novice Stakes, winning comfortably from favourite Cape Sunset. 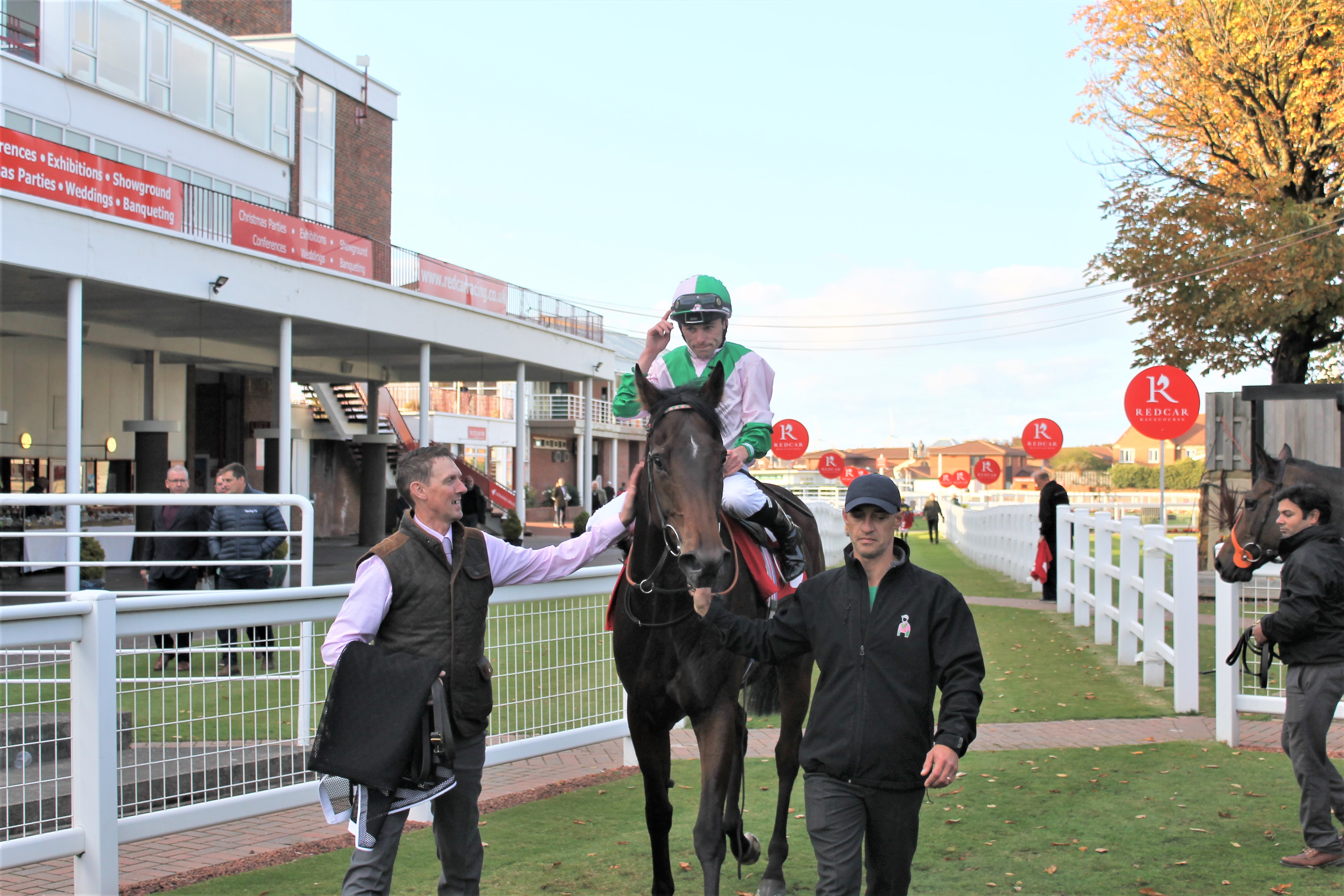 Rossa Ryan rides Albaflora in the Group 1 Qipco British Champions Fillies & Mares Stakes at Ascot, and he had an armchair victory at Redcar on Mr Curiosity in the Sam Hall Memorial Handicap Stakes.

The son of Frankel (pictured below), trained at Newmarket by Charlie Fellows, won with his head in his chest in the famous black and white colours of Anthony Oppenheimer. 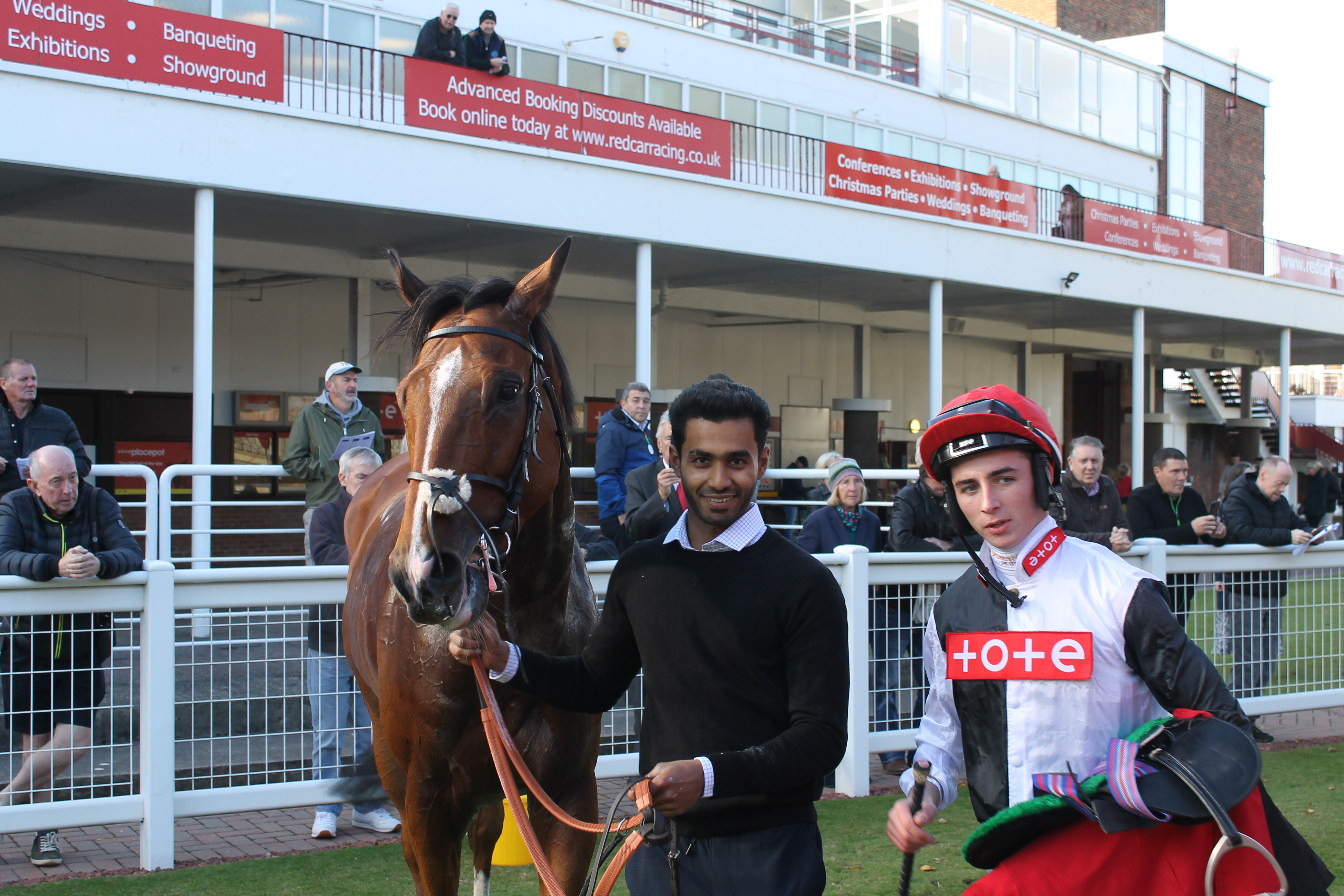 It was also a day to remember for seven-pounds claimer Chelsea Brooks who found the key to her first winner on board Wots The Wifi Code in the Watch Racing Replays At racingtv.com Handicap.

The four-year-old gelding (pictured below), trained in North Yorkshire by Tony Coyle, stayed on strongly under a patient ride to win by half a length from Tim Easterby’s Licit. 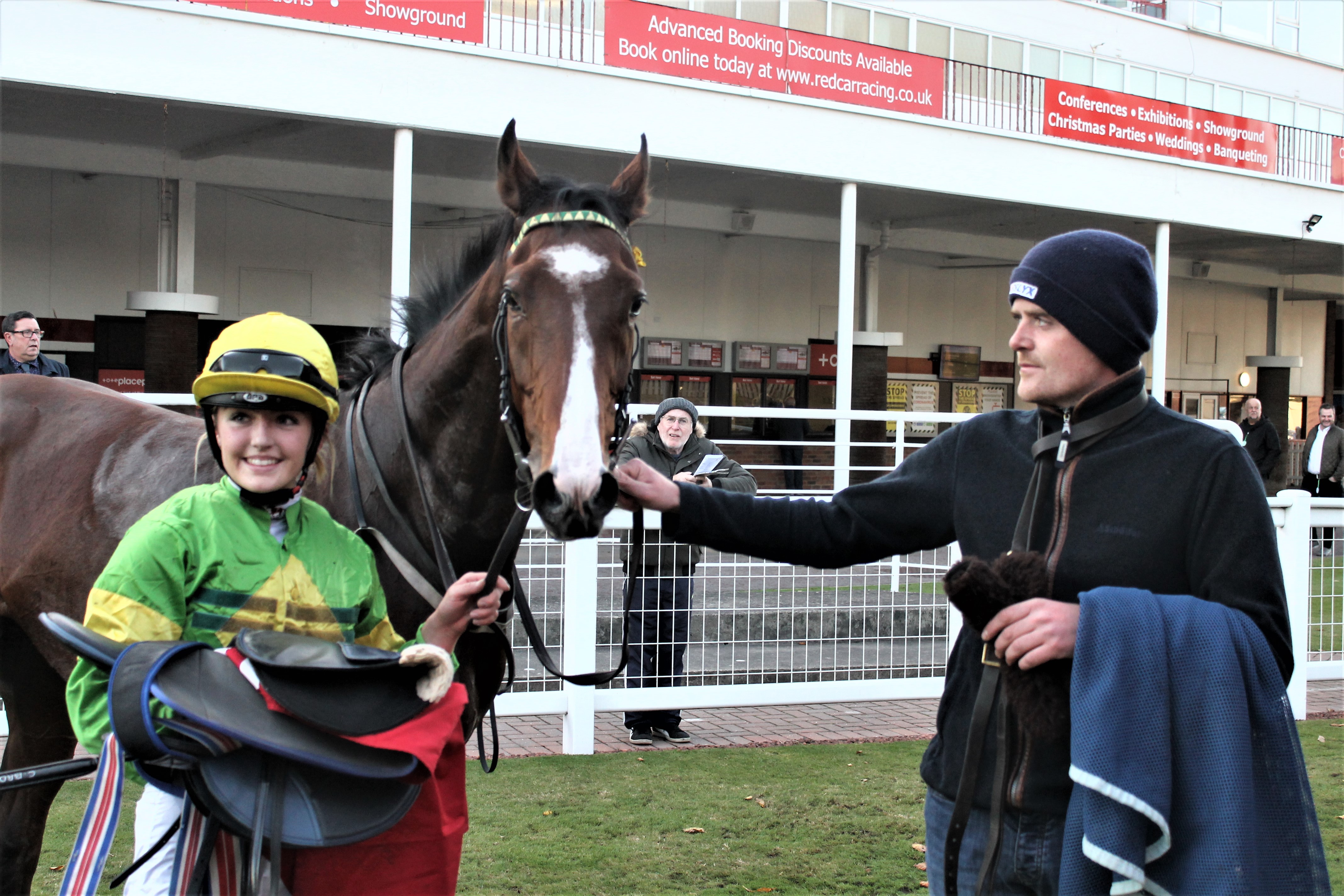 Chelsea, who is attached to the Ollie Pears stable at Malton, said: “He’s been running over a mile and was second on heavy at Pontefract, so we thought he’d stay the 1m 2f on good to soft. I waited and waited, and he finished really strongly.

“It’s brilliant to get my first winner. I can’t quite believe it but Tony said he’d win as long as he stayed, and that he was in great form at home.”

County Durham trainer Michael Dods made it 51 winners for the season when Sezaam (pictured below) showed a great attitude under a never-say-die drive from Connor Beasley to land the Yorkshire Jump Racing Is Back EBF Novice Stakes. 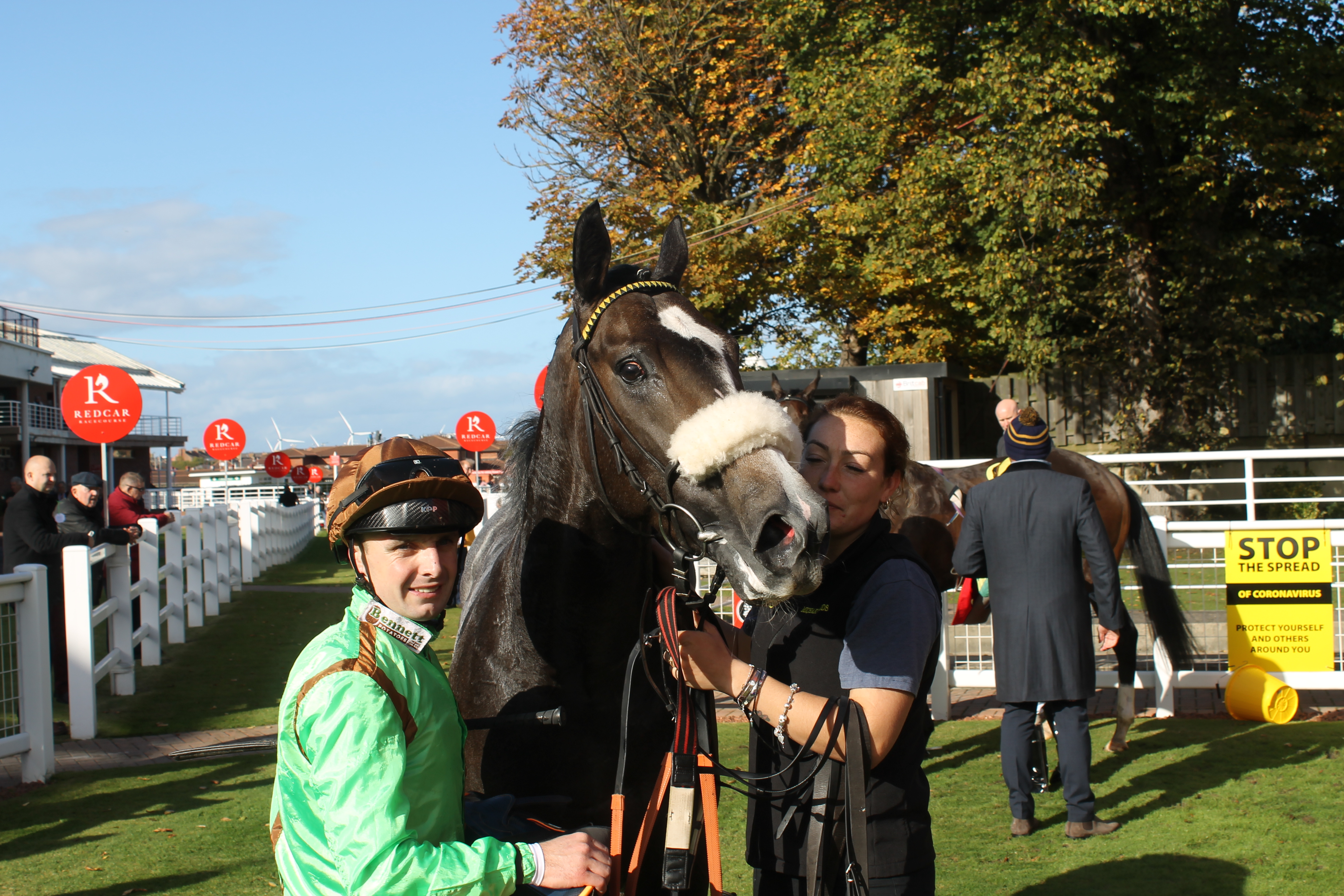 Travelling Head Lad Kenny Williams said: “He looked like he’d be third close home, but he’s knuckled down well and put his head in front on the line. He’s obviously improved for his first run.”

Present Moment, trained at Newmarket by Michael Bell and ridden by Dylan Hogan, looked a filly to follow after upsetting the odds in the Market Cross Jewellers British EBF Fillies' Novice Stakes.

The good-looking daughter of No Nay Never (pictured below) outbattled the William Haggas-trained Oheka, with favourite Divine Jewel in third. 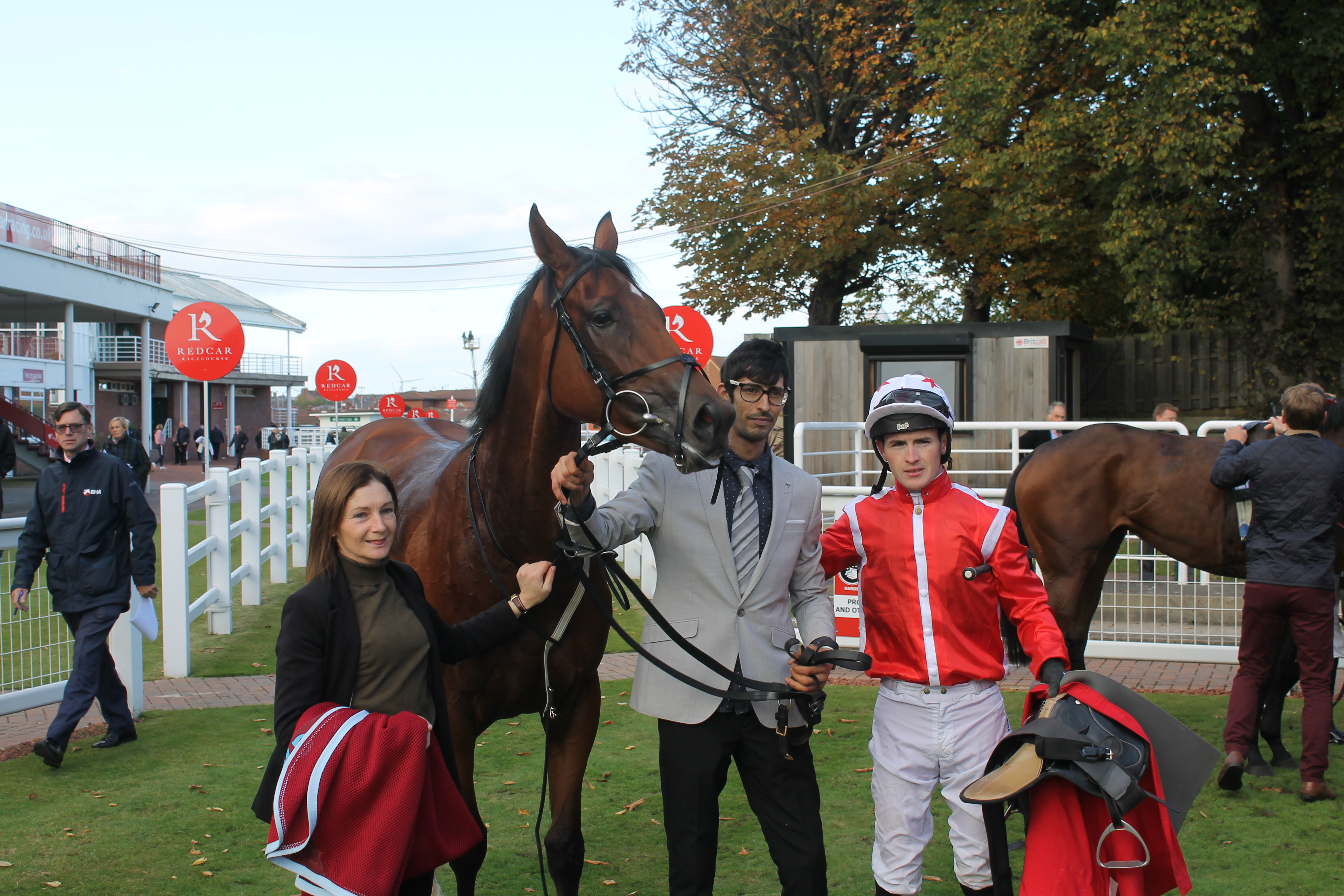 Travelling Head Lass, Kelly Webster, said: “The boss has always held her in high regard, but she’s taken time to come to herself and strengthen up.

“She’s a big filly, not the finished article yet, so she’ll hopefully go on from here.”

The remaining race, The Best Flat Races Live On Racing TV Handicap, was won by Bronze River (pictured below), ridden by Trevor Whelan and trained by Mick Appleby, who stayed on well to deny Kieran Shoemark a hat-trick on Balqaa. 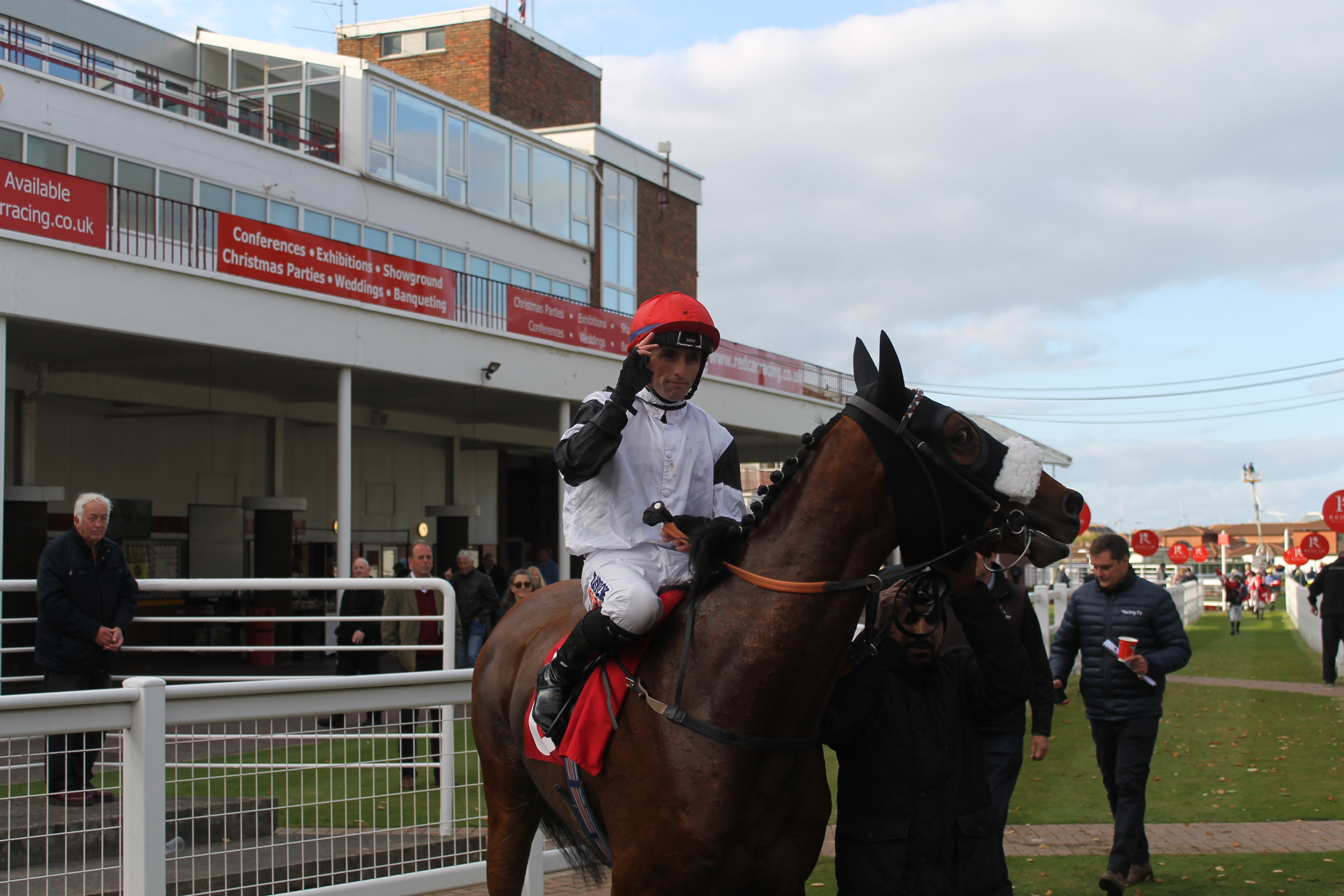