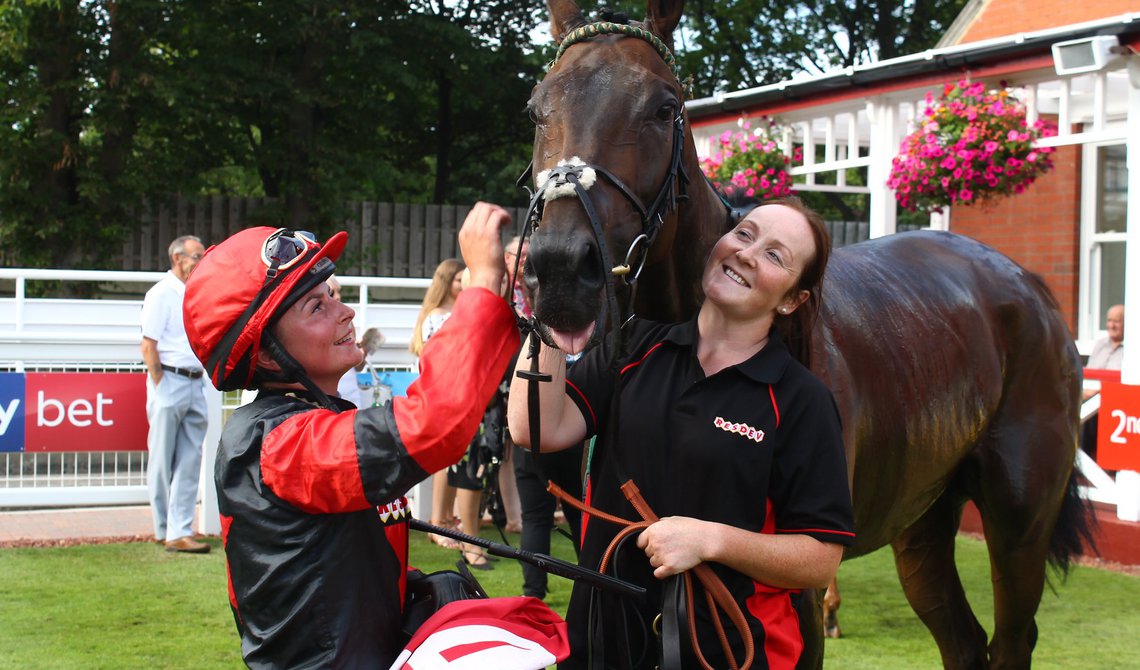 Apprentice jockey Paula Muir had a day to remember at Redcar today (SUNDAY) as she rode her first double and broke the 20-winner mark.

The victory – her sixth on the gelding over the past two seasons – meant she reduced her claim from 7lbs to 5lbs.

It was the second feature race win in two days for Fairhurst, who won Saturday’s Ripon Bell-Ringer Handicap with Benadalid.

“The Armed Man is going in the right direction, but we’ll see what the handicapper does now,” said the trainer, who bred the horse.

Owner Mrs Carol Arnold, who lives in Middleham, has had The Armed Man since he was a foal. “I’ve just had brilliant fun with him,” she said.

Muir went on to secure her double when The Resdev Way won the Go Racing In Yorkshire Future Stars Apprentice Handicap Stakes for Richmond trainer Philip Kirby Racing. She has now clocked up 21 career wins in the saddle.

Whinmoor defied a hefty penalty to battle to a hat-trick of wins by taking the Jacks Coaches Handicap Stakes under Lewis Edmunds. It was the 23rd winner of the season – his best tally of the century – for resurgent trainer Nigel Tinkler.

Owner Jim Gordon said: "I thought he might struggle under the penalty but he's a big horse. He'll have one more run this season and I think he'll be even better as a four-year-old."

Sir Mark Prescott's horses are always to be feared when making their handicap debut and Grey Spirit ran out an emphatic winner of the second division of The Celebrate the Life of Peter Chapman Handicap Stakes under Luke Morris.

There was another impressive performance fromBryan Smart Racing's Antagonize, who was confidently ridden by Graham Lee to win the first race of the day, the Sky Bet Britain's Most Popular Online Bookmaker EBF Novice Stakes..
Owner Mike Bullock said: "We think he could be very good but he's still very green. We're keeping our feet on the ground and taking it a step at a time.”

PICTURE: It's the look of love as Paula Muir thanks The Resdev Way for securing her first ever double.