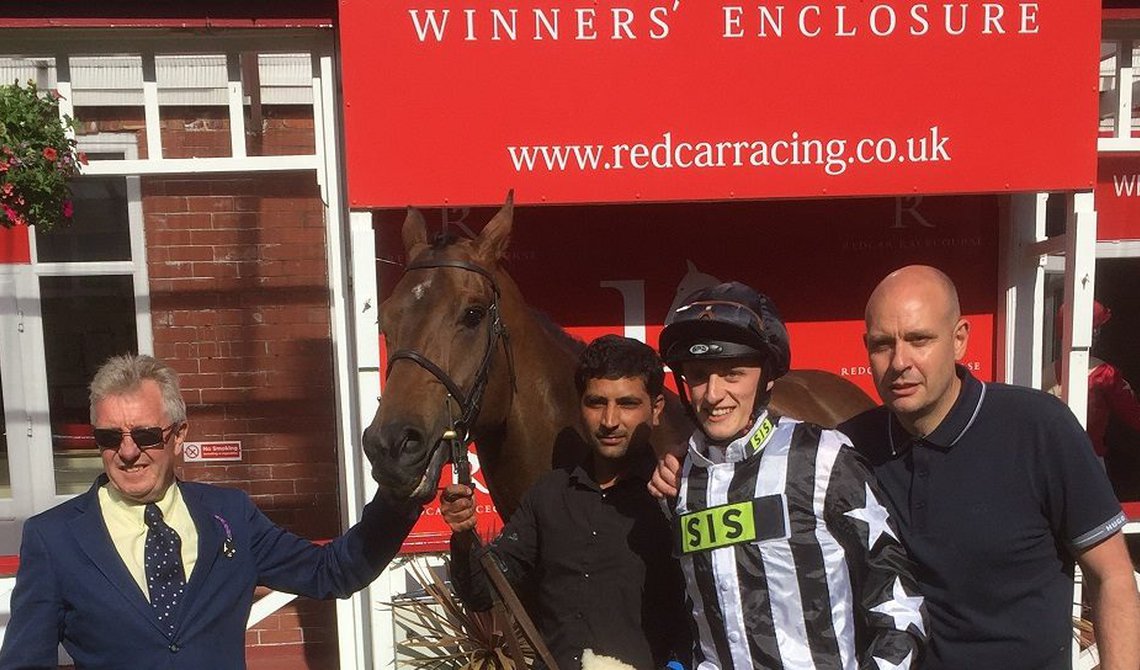 Appleby landed the historic Gold Cup with Big Country, and he celebrated a brace yesterday with Railport Dolly and Cryptonite.

Five pound claimer Gabriele Malune was shown to good effect as Cryptonite stayed on well inside the final furlong to wear down Bryan Smart’s Pepys in the Racing UK’s Biggest Ever Flat Season Handicap Stakes.

Earlier on a sun-drenched afternoon, Railport Dolly came clear inside the final furlong under Alistair Rawlinson to win the Celebrate The Life of Joe Newton Fillies’ Handicap Stakes, named in honour of a popular local man who died suddenly, aged 28, in 2015.

Appleby was denied a hat-trick by a neck when Michele Strogoff was caught close home by James Sullivan on Les Eyre’s Dawaaleeb in the Racing UK Straight Mile Series Handicap Stakes.

It was a memorable day for seven pound claimer Harry Russell (pictured), who had his first career win on board Bryan Smart’s Wrenthorpe, who made virtually all to win the Watch More Racing UK Extra Maiden Handicap Stakes.
Harry, who hails from Clitheroe, said: “It’s brilliant – a dream come true. The quick ground was probably against him, but he’s done it well.”

The seven-race card got underway with a win for veteran trainer Mick Easterby, with Cam Hardie driving Lady Lavinia to lead inside the final furlong in the opening seller. Mick Channon’s Knockabout Queen, a 1-3 shot, trailed home in fourth.

There were two quality horses on show in the second race of the day as Mark Johnston’s Showroom made it two out of two with a tenacious display under Joe Fanning. Ice Pyramid, making his debut for Godolphin, made the favourite work hard for his victory and is one to note for the future.

Most impressive winner of the day came in race five when Whinmoor stormed clear in the style of a good horse. Trained by Nigel Tinkler and ridden by Lewis Edmunds, the grey gelding looks a progressive type.