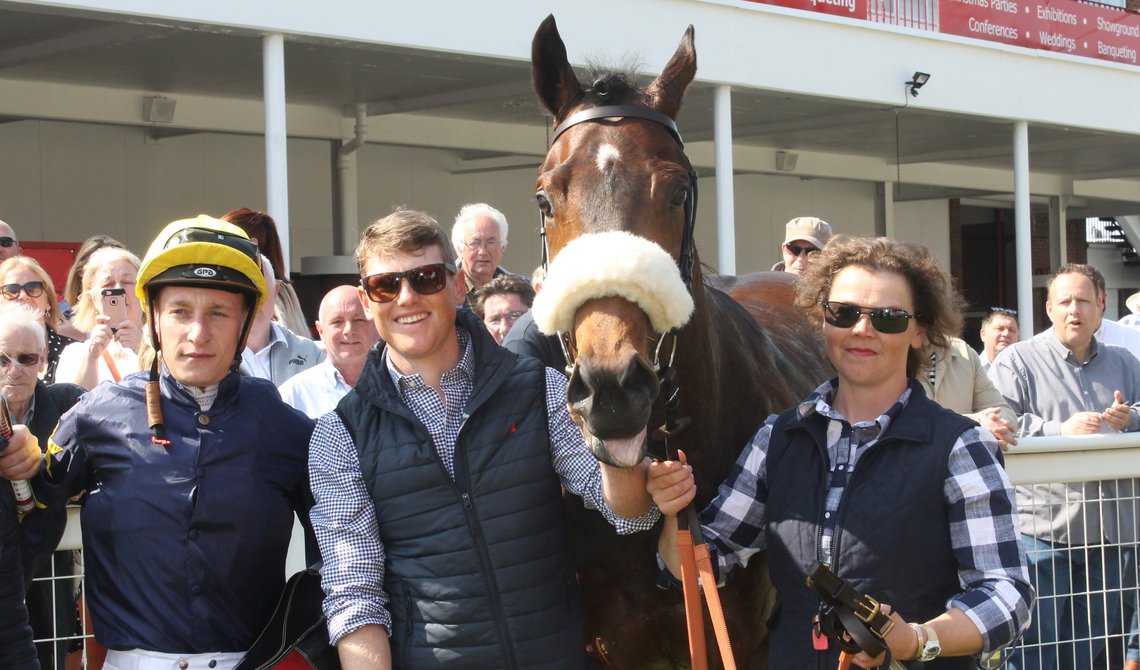 PHILLIP Makin was the toast of Redcar Races today after training his first winner – on the track where a sickening fall ended his career as a jockey.

The horrific fall at Redcar last August led to Makin retiring from the saddle and setting up as a trainer from a yard at Easingwold, in North Yorkshire.

And Galloway Hills, bought out of the David Elsworth yard, got Makin off the mark in fine style under jockey Sam James.

"It's nice to get the first one out of the way ­– we were fairly hopeful because he was the first one we thought had a decent chance," said Makin.

“After what happened here last summer, it’s especially nice to get off the mark at Redcar. It’s such a good, fair track so we’ll always be happy to send horses here.”

The trophy was presented to Makin by Peter Rushby in memory of his wife Susan. The couple were long-standing members at Redcar and the race was originally planned as a celebration of their 40th wedding anniversary.

Sadly, Susan died suddenly in March, but Peter decided to go ahead with the race as a touching way of remembering his wife.

"It's what she would have wanted because she loved coming here," he said.

"Susan had multiple sclerosis and was in a wheelchair but Redcar is a fantastic course to get around and the staff have been brilliant," added Peter, who backed the winner.

"Susan would have been over the moon with that," he said.

The Armed Man and Paula Muir are fast becoming one of the most prolific partnerships in racing. Five-pound claimer Muir won for the seventh time on the Chris Fairhurst-trained gelding in the Market Cross Jewellers Handicap Stakes.

Fairhurst, who also bred the horse, said: "We thought he'd need his first run of the season but clearly not. He's just been a dream of a horse to train and Paula's just clicked with him."

Owner Carol Arnold said: "He doesn't like change and Paula even talks to him - I think she might even use the odd Scottish swear word at him! He's given us such a lot of pleasure. We have his full brother, The Gingerbread Man, in training with Chris. He hasn't done anything yet but, hopefully, he's saving himself."

Anna Bunina is owned by O’Keeffe’s father-in-law, Richard Johnson, and wife Jacqueline. By Poet’s Voice and out of Russian Society, the filly was named by Jacqueline after the first Russian female poet to make any money in the romantic period.

“We watched her on the gallops on Saturday and she did really well, so we were hopeful,” said Jacqueline.

Echo had won his last two races on the all-weather at Newcastle over 1m 4f but O'Keeffe was confident he would stay the extra half mile of today's contest.

"The jockey was struggling to pull him up at Newcastle so we thought this would suit him," he said. “He’ll probably stick to this sort of distance now.”

The trainer also paid warm tribute to winning jockey Jack Garritty. "He doesn't get the chances he deserves because of his weight but he's such a fantastic team player, he's a real asset to us," he said.

The horse is owned by Glasgow-based Akela Construction Ltd and managing director Mark Markey said: "The handicapper will probably get hold of him now but he's a nice horse and there'll be plenty of nice races for him to go for."

Tudhope had enjoyed a very classy performance from the well-backed Country, a beautiful son of Dubawi, in the first race of the day, the Watch Racing TV In Stunning HD Novice Stakes. Trained at Newmarket by William Haggas, he looks a horse with a future.

Lexikon was a welcome winner for Malton handler Ollie Pears in division one of the Grace Chapman Designed Today’s Racecard Cover under a strong Jamie Gormley ride.

And the eight-race card was brought to a climax with Ascot Dreamer, trained by David Brown and ridden by Lewis Edmunds, winning the Like Racing TV On Facebook Handicap Stakes.