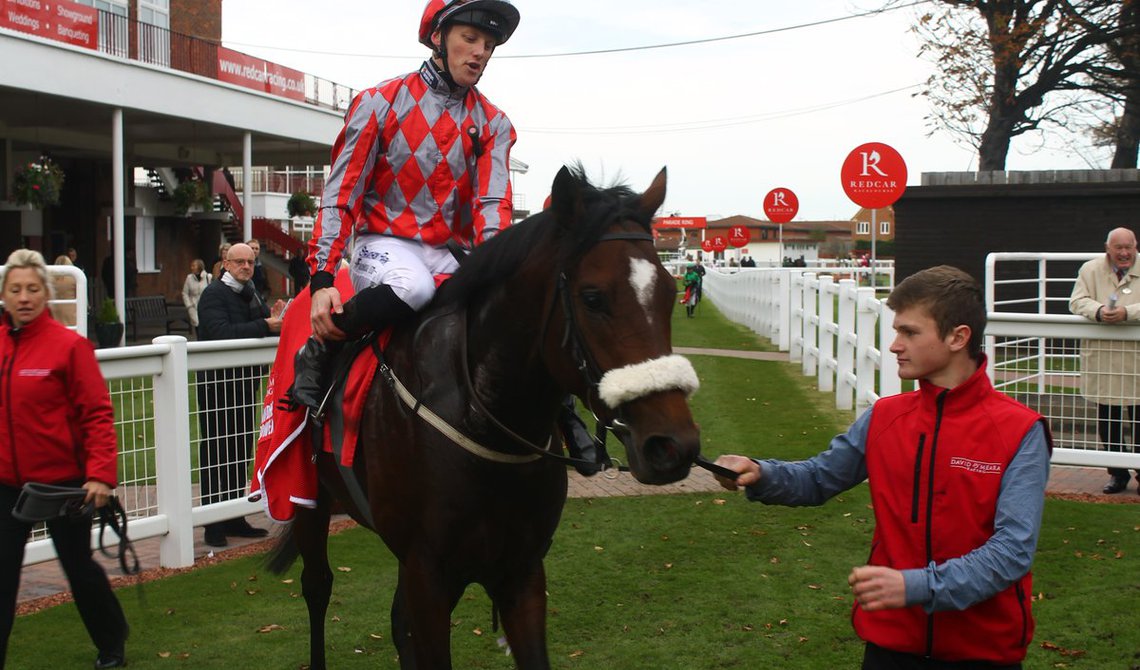 FORMER jockey Phillip Makin makes a welcome return to Redcar on Monday – this time as a newcomer to the training ranks – seven months after an horrific fall at the seaside track.

Makin, a popular figure in the weighing room, was left with a broken bone in his neck and serious back injuries in the crash last August. He was coming to win his race on Eyecatcher when the horse fell, and Makin was plunged into the turf in front of shocked racegoers.

The accident accelerated his plans to become a trainer and he was granted his licence last month to operate from Easingwold in North Yorkshire.

Makin runs Alfa McGuire in the Tommy Sanderson Is 9 Today Handicap and regulars will be pleased to see Makin back at Redcar and wish him well in his new career.

“Obviously, the last time I was at Redcar, I left in an ambulance but it honestly doesn’t worry about going back – I have more good memories than bad memories of Redcar because I rode a lot of winners there and it’s just a good, fair track and the medical staff did such a great job,” said Makin today (Sunday).

“I can remember going round on the horse, and it taking a while to warm up, but it was coming to win its race when it faltered, and the next thing I remember is waking up in the doctor’s room.

“I knew fairly soon that it was the end of my riding career but it’s exciting to be starting my training career and just looking forward to getting going.”

Alfa McGuire was a decent two-year-old, winning twice at Beverley and was highly tried in the Racing Post Trophy at Doncaster and the Britannia Stakes at Royal Ascot, but lost his form.

“I think he’ll improve for the run at Redcar, but I’m really pleased with him – he’s looking good,” said Makin, who has 23 horses in his care with plenty of room to expand his operation.

Sheberghan, trained at Lambourn by Archie Watson and ridden by Oisin Murphy, is likely to head the market in the race. The Sea The Stars gelding has run twice without distinction this season but had winning form in Ireland when trained by Dermot Weld last year. Chinks in his armour could well be exposed by Bryan Smart’s Helovaplan, who justified favouritism at Newcastle in February.

Redcar, recently voted the Best Small Racecourse in Scotland and the North, kicks off 2019 with an attractive eight-race card and the big guns of the training and riding ranks are out in force.

Murphy also rides likely favourite Exclusively for Watson in the opening Flat Is Back At Redcar Fillies’ Novice Stakes and the market should be a strong indicator in a field of 13 debutantes.

Big southern trainers are likely to dominate the Become A Redcar Annual Badgeholder Novice Stakes. John Gosden’s Private Secretary showed promise with two seconds as a two-year-old, while James Fanshawe’s Entrusting looked sure to improve after his only run when fifth at Nottingham and has Silvestre De Sousa in the saddle. William Haggas also sends up Sinjaari, who ran green when making a promising debut at Sandown so a tricky affair is in store.

Gosden will also be a leading contender in the Watch Racing TV In Stunning HD Handicap with Forest of Dean, who kept on well to beat an odds-on favourite at Newcastle in February. Hugo Palmer and James Doyle add further spice by teaming up with Red October, a winner at Chelmsford City on his last run of 2018.

Doyle and Palmer may have a better opportunity in the Racing TV Straight Mile with On The Line, a Dark Angel colt, who was eased close home when winning well at Lingfield on March 22.

Mick Appleby enjoyed rich pickings at Redcar in 2018, including his victory in the Zetland Gold Gup with Big Country, and his Channel Packet, ridden by 7lbs claimer Mark Crehan, is appealing in the Watch Irish Racing On Racing TV Handicap (Division One). The David O’Meara-trained Zorawar, who has run seven times on the all-weather already in 2019 and won twice at Wolverhampton, is a leading rival.

Mr Coco Bean, trained at Thirsk by David Barron and ridden by PJ McDonald, stayed on gamely to win at Southwell in January and is the choice for Division Two.

The meeting comes to a conclusion at 5.30pm with the Every Race Live On Racing TV Novice Median Auction Stakes. Michael Dods’ horses have been running well early on and a chance is taken with Bumbledom. Described by the trainer as a big horse who’s likely to get further, he ran with promise at Thirsk on his only runs as a two-year-old and is said to be in good form at home.