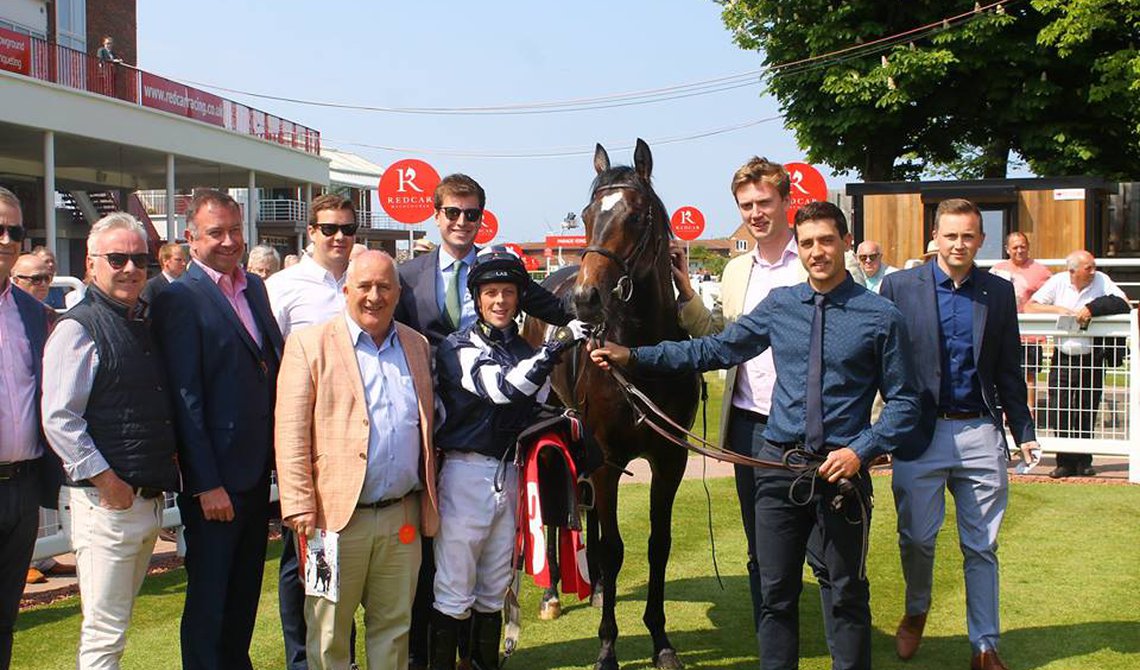 Mr Hirst flew to England on Friday and will jet home to Thailand from Newcastle tomorrow (Tuesday) with a smile on his face after seeing his promising bay colt triumph in The Watch Racing UK Anywhere Novice Auction Stakes.

“It’s a long way to come but he’s been showing promise at home so it was worth it,” said Mr Hirst after the Mick Channon-trained two-year-old had proved too strong for Tim Easterby’s Big Ace.

After the race, Channon confirmed that he wouldn't be afraid to pitch the well-backed Clodovil colt in at Ascot, in the Coventry Stakes.

"It's whether we go there or wait for the July Stakes at Newmarket. I'll talk to his owner but you know me, I'd give it a go," said Channon.

Voyager Blue was entered in the Derby and the well-bred colt, trained at Lambourn by Jamie Osborne, upset odds-on shot Savaanah in the Racing UK Profits Returned To Racing Median Auction Maiden Stakes despite running green.

However, following a post-race telephone conversation with the trainer, owners Ian and Pam Bendelow confirmed that the Footstepsinthesand colt would miss the Derby and be aimed at a valuable race at Chelmsford City next Thursday.

“He hasn’t matured sufficiently yet but there are good races to be won with him,” said Mr Bendelow.

The couple have owned a number of horses, most notably Group winner Illustrious Blue, who was ninth in the Melbourne Cup.

Champion jockey Silvestre de Sousa arrived at Redcar on the back of a four-timer at Ripon but it took until the last race for him to bag a winner, with If We Can Can staying on stoutly, in the typically determined style of a Mark Johnston runner.

There was a kiss for both horse and jockey in the winner’s enclosure after the Racing UK HD On Sky 426 Handicap Stakes Division II, won impressively by Eeh Bah Gum in the hands of David Allan for trainer Tim Easterby. Joint owner Lena Rhodes couldn’t resist planting a smacker on the gelding's nose before turning her attention to the rider.

“It was on Nick’s bucket-list to own a winner, and we absolutely adore this horse,” said Lena, who lives with her husband at Thornton-le-Dale in North Yorkshire.

Laith Alareen was a third win of the season for the 21st Century Racing syndicate in the Racing UK HD On Sky 426 Handicap Stakes Division 1.

The gelding, trained by Ivan Furtado, won readily under a good ride by claimer Jane Elliott. Andy Catterall, who runs the syndicate, said: "We didn't really know but we were hopeful and he loved the fast ground."

It is the second year that the race has been run in memory of a popular Darlington couple, who were regulars at Redcar, and a large contingent of family and friends were in the winner's enclosure for the presentation.

The couple's son Andy said: "They loved it here and it was part of our childhood so we'll aim to keep it going in memory of them."

Co-owner Steve Ryan said: "I was expecting him to win - he's a really lovely horse and the jockey rode a cracking race on him."

Richard Fahey's La Sioux had to survive a steward's enquiry after swerving left a furlong out under Paul Hanagan before coming clear in the Racing UK Straight Mile Fillies' Handicap Stakes but the result was confirmed.

The eight-race card, staged in beautiful sunshine, was a warm-up for one of Redcar’s premier meetings, The Zetland Gold Cup, next Monday.

PICTURED: Chris Hirst, centre in light jacket, who flew in from Thailand to see Certain Lad win the first race