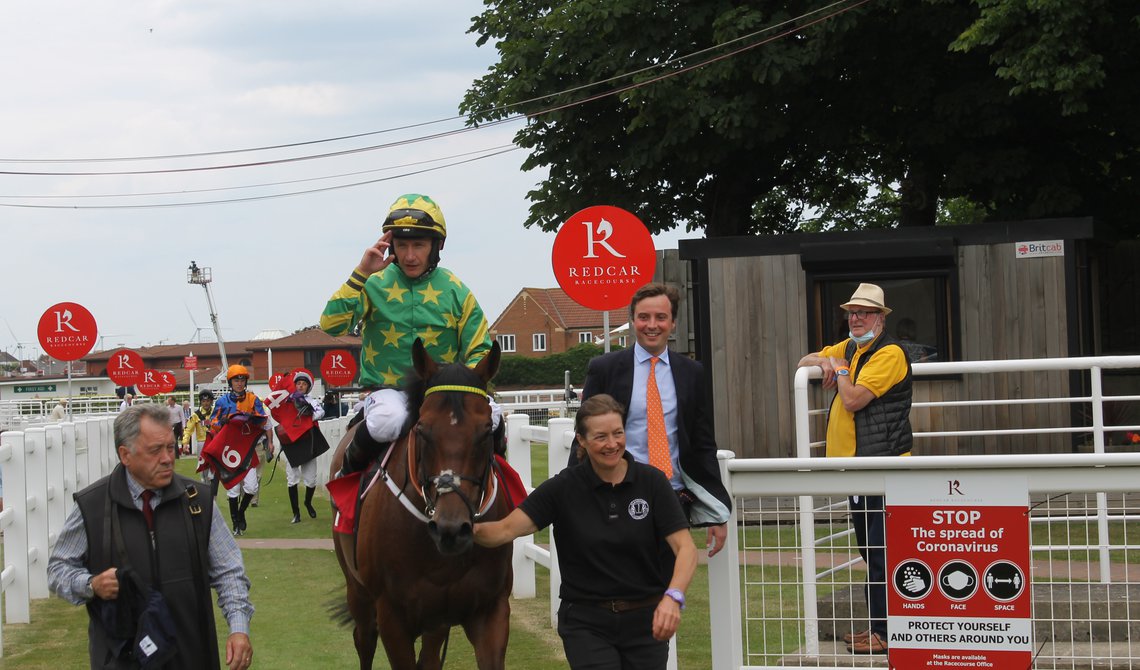 FRESH from the biggest pay day of his life when riding Pyledriver to Group 1 victory at Ascot, PJ MCDonald looks poised to star back on more familiar territory at Redcar on Wednesday.

The victory sealed one of the most unlikely big race doubles in racing, with McDonald having ridden Hot Weld to victory over jumps in the 2007 Scottish Grand National.

Now, McDonald looks the man to follow midweek at Redcar, with a couple of particularly attractive rides, starting with Next Chapter, trained at Newmarket by James Tate.

The daughter of Shamardal shaped well on her last start when a staying-on close second at Newmarket and looks ready to go one better in the Watch Racing TV In Stunning HD Fillies’ Novice Stakes.

McDonald has another fine chance an hour later on Encourageable in the racingtv.com Straight-Mile Series Handicap. The colt, owned by John and Jess Dance and trained at Middleham by James Horton, was outgunned by David O’Meara’s resurgent Azano at the last Redcar meeting.

However, Azano’s previous success had been in the listed Guisborough Stakes at Redcar in October, so Encourageable’s defeat was no disgrace, and he looks poised for consolation.

Redcar’s seven-race card gets underway at 2pm with the Best Flat Races Live On Racing TV British EBF Novice Stakes. Nigel Tinkler’s Lakota Blue was considered good enough to have a tilt at the Group 2 Coventry Stakes at Royal Ascot and wasn’t disgraced in ninth. He won his next race at Carlisle at the start of the month and looks capable of doubling up with Faye McManoman claiming a useful three pounds.

Tim Easterby is Redcar’s most successful trainer over the past five years and the Malton trainer could be in for another good day. He appears to have a solid chance of taking the Celebrate The Life of Joe Newton Handicap with Forgivable, ridden by David Allan after the Iffraaj gelding was a close third at Pontefract last time out in June.

It may be worth taking a chance with Easterby again in Division Two of the Visit racingtv.com Handicap with the nine-year-old veteran Excessable. It’s 19 runs since his last win but he’s dropped down the handicap and showed enough at Beverley last time to suggest he may still have another win in him. Seven-pounds claimer Brandon Wilkie retains the ride.

And it would be no surprise if Easterby struck again with Mac Ailey, ridden by his son Thomas, in the AJA Novice Flat Amateur Jockeys’ Handicap. The gelding only just failed to get up at the last Redcar meeting and will be fancied to go one better.

Isle of Dreams, trained at Malton by Declan Carroll, is in good form, having battled well to win under five-pounds claimer Zak Wheatley at Musselburgh last time. She has the right attitude to defy a penalty in the Visit racingtv.com Handicap (Division One).