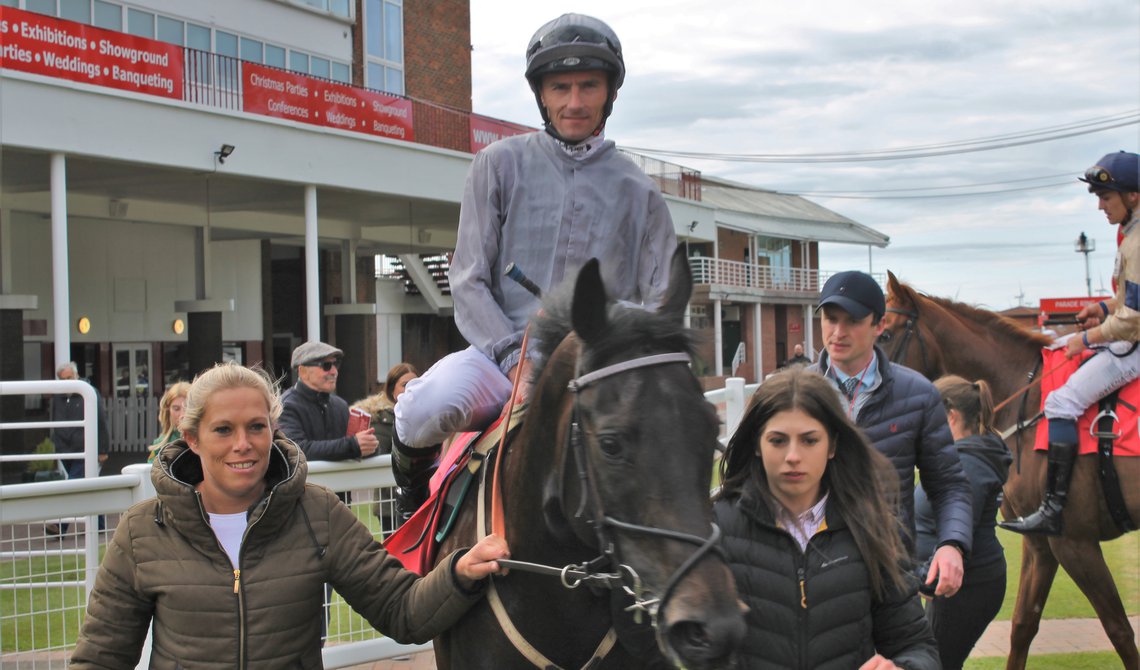 IF ever there was an illustration of the unpredictability of horse racing, Danny Tudhope experienced it at Redcar today.

The high-flying jockey won the one of Redcar’s feature races of the season, the Racing TV Zetland Gold Cup, on Al Muffrih on Monday.

But today he suffered one of the most frustrating day’s racing any jockey can have encountered when three of his rides – including two favourites – refused to enter the starting stalls.

In the first race, Archie Watson’s Quiet Word proved unruly and didn’t race. The filly had been made favourite after the Richard Fahey-trained Three Coins also refused to enter the stalls.

Hitman was the next Tudhope mount to disgrace himself in race four, but worse was to come in the fifth when the unruly odds-on shot Hamish, trained like Al Muffrih by William Haggas, was left behind by the starter.

With market leaders Three Coins and Quiet Word out of the running, Bella Brazil, trained at Thirsk by David Barron, ran out an impressive winner of The Longines Irish Champion Weekend EBF filies’ Novice Stakes.

Former British Horseracing Board chairman, Peter Savill, flew over from Ireland to see his filly run and was confident of a big run after her promising debut fourth at Hamilton.

Jockey Tom Eaves reported that Bella Brazil had come to win her race easily but then looked about, so connections think there’s more to come.

“The plan is to run next on June 17 – either at Carlisle or Nottingham,” said Mr Savill. “She also runs in the name of my son, Thomas, and he's coming over from America so it will be nice for him to see her.”

The victory gave jockey Tom Eaves a double and Carr said: "Tom's agent rang me to say Tom wanted the ride so that gave me an indication. She's a filly and the owners bred her, so it was important to get a win – that box is now ticked."

The defection of Hamish opened the door to the 100th winner for the Kingsclere Racing Club as Sneaky Peek, trained in the south by Andrew Balding, dominated the Watch Irish Racing On Racing TV Median Auction Maiden Stakes with David Probert riding.

Victory for the Richard Fahey-trained Fantastic Ms Fox in the Follow Redcarracing On Facebook & Twitter Maiden Handicap Stakes (Division One) was a double cause of celebration for Mel Roberts who not only owns the filly but bred her too.

The Sheffield lawyer has had horses with Malton trainer Fahey since 2003, including the winner's dam, Cracking Lass, who was rated 107.

"I've been a lucky owner – I've had horses that have run at Ascot and winners at the York Festival, but it’s special to see one win that you’ve bred,” said Mr Roberts.

Archie Watson has an impressive strike rate at Redcar, but he doesn’t often make the trip north himself. He made an exception today and was rewarded with a double, with Victoriano preceding Inspired Thought’s victory by landing the Facebook & Twitter Maiden Handicap Stakes (Division Two) under a determined ride by Edward Greatrex.

And it was a case of “You’re The Best Thing” as Mansfield won the Watch Race Replays At Racingtv.com Amateur Riders' Handicap Stakes for the Style Council syndicate. It was a first flat winner for Lancashire trainer Stella Barclay and earned the smile of the day from winning jockey Joanna Mason.