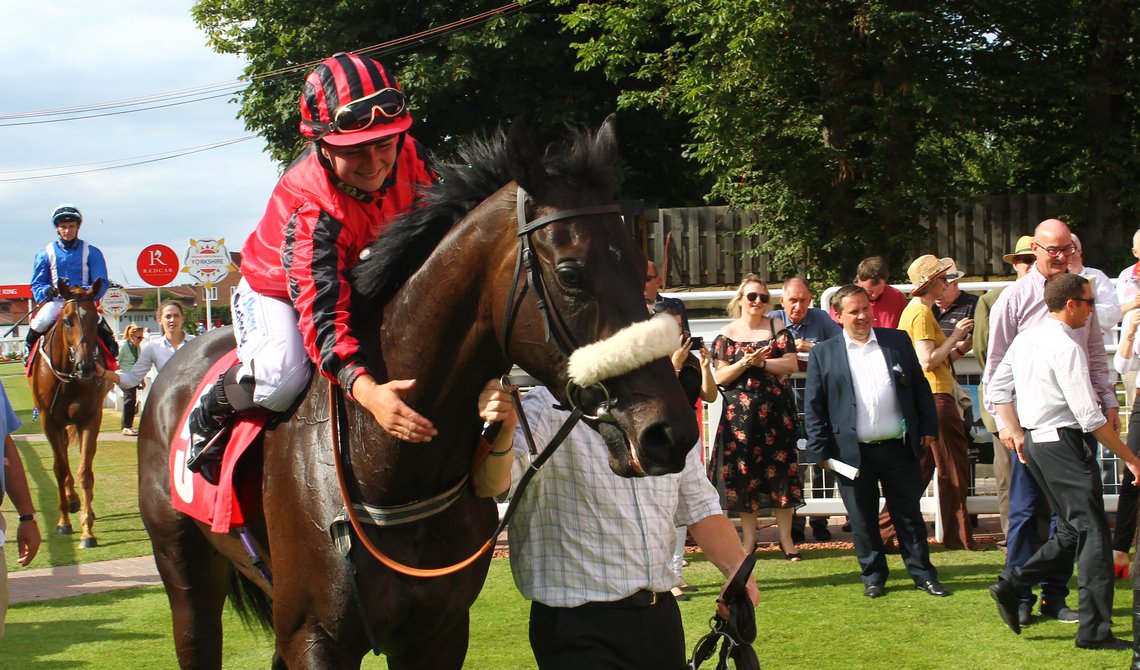 APPRENTICE jockey Paula Muir has made no secret of her love affair with The Armed Man and the winning relationship looks poised to hit new heights at Redcar on Sunday.

The seaside track stages 1940’s Revival Day as part of the Go Racing In Yorkshire Summer Festival, with The Armed Man aiming to defend the feature race he won last year.

Trained at Middleham by the unassuming but shrewd Chris Fairhurst, the gelding was winning for the sixth time under Muir when he took the SkyBet Go Racing In Yorkshire Summer Festival Handicap by a neck in 2018.

“We just gel. I trust him and he trusts me – I just love him,” said Muir after the race.

The combination won again at Redcar in April and they look sure to be in the shake-up despite carrying 2lbs higher than last year.

Another Middleham trainer, the record-breaking Mark Johnston, comes to Redcar with a strong hand, starting with Thunderous in the opening SkyBet Britain’s Most Popular Online Bookmaker EBF Novice Stakes.

The 70,000 guineas yearling made all to win decisively on his debut at Doncaster and looks the type to defy a 7lbs penalty under the ever-reliable Joe Fanning. Hugo Palmer’s improving Newmarket raider Arthur’s Court, by Derby winner Camelot, is a clear danger.

Johnston and Fanning go into bat in the Redcar Cricket Club Fillies Handicap with Warning Fire, a daughter of French derby winner Sharmardal, who Johnston trained to be champion two-year-old in 2004. She looked really progressive when making all at Doncaster last time over seven furlongs, giving every impression she’ll stay the extra furlong.

Another stalwart of the Yorkshire training ranks, Tim Easterby – Redcar’s reigning champion trainer – may have the answer to the Celebrate The Life of Peter Chapman Handicap (Division Two) with One To Go. A runner-up in his last two races, including being beaten by just a neck last time at Pontefract, the gelding can get his head in front this time. Greengage, trained by Tristan Davidson, was highly promising second last time at Ayr and, with the eye-catching booking of the much-travelled Luke Morris, she looks the danger.

It would be no surprise to see County Durham trainer Michael Dods in the winner’s enclosure at some point during the day. The Denton handler runs Farhh Away in the Celebrate The Life of Peter Chapman Handicap (Division One) and despite no wins in nine runs, the gelding has the ability to win under top weight. Any rain will help as he steps up in trip but he’s not a horse to back with confidence because he has a mind of his own.

Dods saddles two in the Jacks Coaches Handicap in the form of Kolossus and Charlie’s Boy. Kolossus, a winner at Ayr last season, ran a solid race to be second at Ayr last time. However, a chance is taken at longer odds with Charlie’s Boy who has been crying out for seven furlongs and is the preferred choice of stable jockey Paul Mulrennan.

First Flight, trained by Brian Ellison, is the horse with most ability in the Help For Heroes and Royal British Legion Classified Claiming Stakes but is hard to trust given that he refused to race on his penultimate start. It feels much safer to side with David Evans’ Anif who makes the long trip from Gwent.

The eight-race card finishes at 6.15pm with the Go Racing In Yorkshire Future Stars Apprentice Handicap and Sir Mark Prescott’s Distant Chimes, ridden by William Carver, is a confident selection to defy a 5lbs penalty for winning first time out this season at Wolverhampton.