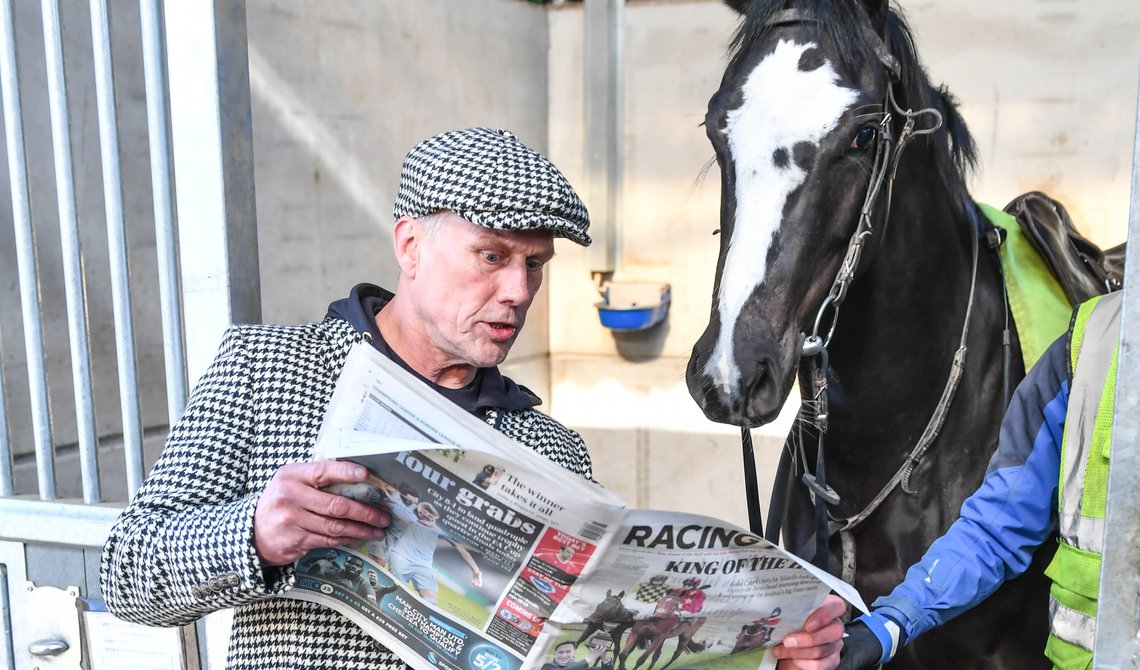 POP legend Bez is hoping for a “Happy Monday” when he visits a North-East racecourse today to watch his horse run in the first race.

The Happy Monday’s maraca-player and dancer has travelled to Redcar Racecourse to see filly Mystic Moonshadow run in the colours of his new racing club.

Bez – real name Mark Berry – launched Bez’s Racing Club at the end of March and describes Mystic Moonshadow as “the most magical, beautiful horse I’ve ever set eyes on”.

He added: “She’s got these deep wise eyes, wizard whiskers, and a really distinctive looking white blaze on her face. As soon as I met her, I felt a strong connection. I think we’re kindred spirits."

Bez made his name with through his bizarre dance routines with Manchester-based The Happy Mondays, whose hits include Step On and Kinky Afro. He has recently become a regular feature on Celebrity Gogglebox with the band’s lead singer Shaun Ryder.

He says the name, Mystic Moonshadow, came to him in a dream and the filly has been put into training in Leyburn, North Yorkshire, with Jedd O’Keeffe. She makes her debut in the Join Racing TV Now Fillies Restricted Novice Stakes at 1.50pm and will be ridden by Jack Garritty.

The brand-new racing club gives members a shared experience of racehorse ownership, alongside regular entertainment from Bez, who is a self-confessed racing novice, but was looking for an opportunity to throw himself into something completely new. He says he’s only ever sat on a donkey before, and has only ever placed one losing bet.

Any winnings from Mystic Moonshadow will be donated to Manchester-based homeless charity, Coffee 4 Craig, which Bez has long supported due to his own experiences of being homeless when he was younger.

Now Bez is calling on fans, old and new, and anybody with an interest in horses and horseracing, to join him on what will be an entertaining, but bumpy and often hilarious ride, by becoming an exclusive member of his club. Membership can be purchased for £59 from www.bezracingclub.com.

In addition, members will receive a welcome pack with a hand-written postcard from Bez, a certificate of membership, car window sticker, monthly newsletter updates on how the horse is developing, and the chance to win regular Bez’s Racing Club merchandise.

Bez added: “Growing up in Salford I never dreamed I would part-own a thoroughbred racehorse. The closest I ever got to racing action was a Dick Francis novel. To have the opportunity now to launch my own racing club and throw myself into this new adventure is amazing - unexpected, but very amazing.

“I’m launching the club for anyone that fancies being involved in racing but who’s never been able to afford a horse, or for people that think that racing is too posh or exclusive for them. If the sport will let me in, it’s open for everyone!

“I fell in love with the idea of launching it after becoming a member of Burrow Seven, the racing club set up for Rugby League player Rob Burrow. It was such a good idea, and I’m always looking for adventures and new ways of having fun, so I thought let’s get stuck into this racing game.

“Obviously, I can’t promise we’re going to be winners, but I can promise that we’re going to have a lot of fun, some great days out and hopefully we’ll all make some good friends as we get involved in the world of racing. I’d love everyone to come and join me on this adventure.”

Mystic Moonshadow was sired by Showcasing, who won the Gimcrack Stakes at York where he broke the course record.  Showcasing is the only stallion to have sired two Royal Ascot Group 1 Commonwealth Cup winners and he also sired 24 individual two-year-old winners in 2020. His dam, Dream of Joy, placed twice at two and three years.

Trainer Jedd O’Keeffe said:  “Mystic Moonshadow is an enormously exciting horse and she comes from a fantastic pedigree. Her father has a great track record of siring Group One winning fillies and her mother is an impressive sprinter too, so there’s a lot of speed in both parents.

“The ideal attributes for a winning racehorse are a great pedigree, willing attitude, competitive nature, good movement, a great size and the aptitude to want to be a great racehorse. Mystic Moonshadow appears to have all of these qualities.”