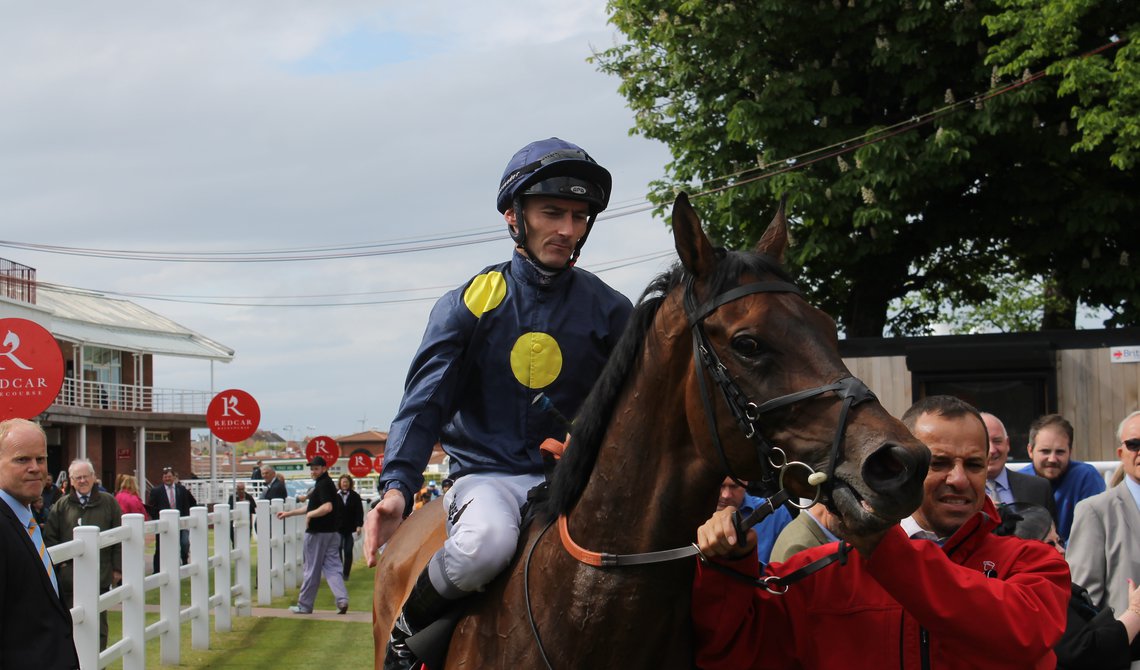 The gelding, by the legendary Sea The Stars, and trained at Newmarket by William Haggas, battled gamely to hold off the challenge of Richard Hannon’s Leroy Leroy, with Mark Johnston’s Ventura Knight running a big race at 25-1 in third.

Tudhope said the race had gone perfectly, adding: "He's taken time to learn to settle but they went a good gallop and the gaps opened perfectly. He's always been held in high regard and I imagine they'll aim high with him now."

Fitted with a hood for the first time, Al Muffrih settled much better and Tudhope agreed that races at Royal Ascot, such as the Wolfreton Handicap or Duke of Edinburgh Stakes, might be possible targets.

There was another win for Newmarket as the progressive Wise Words, trained by James Tate and ridden by David Allan, comfortably landed the inaugural North East Autism Society Going4Gold Handicap Stakes.

The eight-race card got off to an exciting start with debutante Liberty Beach, ridden by last year's Redcar champion jockey Jason Hart and trained at Malton by John Quinn, winning the racingtv.com Novice Auction Stakes in a driving finish.

Quinn said: "We've always liked her, and she's been working nicely but it looked a competitive race, so we thought she'd run well without winning."

Wolverhampton Wanderers fans had cause for celebration after the Congratulations Competition Winner Maria Ferguson Selling Stakes. Magwadiri, owned by the Shropshire Wolves syndicate of football supporters, won well for Kidderminster trainer Mark Loughane, in the hands of Richard Kingscote.

Syndicate member John Lindsay, from Whitley Bay, said: "He's been slowly away from the stalls in his races, so he went for a barrier test at Lingfield. They recommended a Monty Roberts' rug and a hood in the stalls and it looks like it's worked perfectly."

There were lovely scenes in the winner's enclosure after the Market Cross Jewellers Handicap Stakes was won by Archie Perkins, trained at Malton by Nigel Tinkler and ridden by Rowan Scott.

The winner is named after the four-year-old grandson of Stewart Perkins, who co-owns the gelding with John Raybould, and ­Archie junior received the trophy after the race.

"He knows the name of every horse in the yard and we just thought Archie Perkins was a nice name for this horse. They have the same personality – very quick and a little bit naughty," said Stewart, who runs a business letting holiday cottages at Whitby and Sandsend.

Hollie Doyle and Lambourn trainer Archie Watson are no stranger to the winner’s enclosure at Redcar and In Trutina was another decisive winner for the combination in the Racing TV Profits Returned To Racing Median Auction Maiden Stakes.

Mr Coco Bean made it three wins out of five runs this season as he landed the Come Racing Again Tomorrow Handicap Stakes for Thirsk trainer David Barron under a powerful ride by Ben Curtis.

The meeting come to a climax with a win in a driving finish for the Richard Fahey-trained Sosian, ridden by Paul Hanagan.