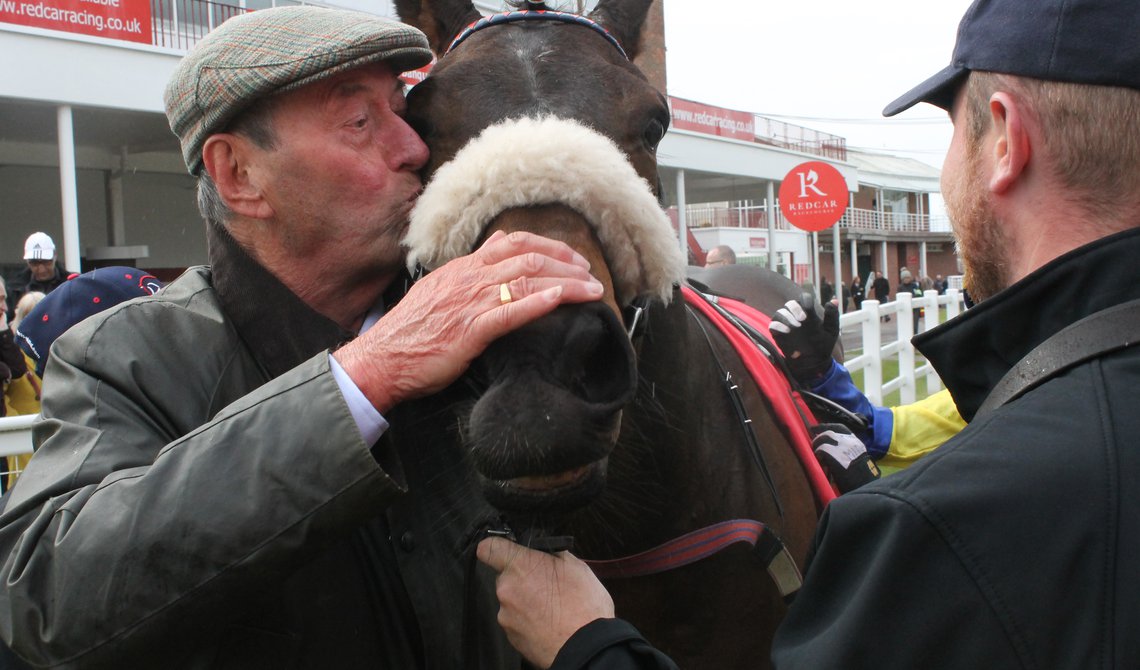 GRANDAD Roger Saunders is celebrating his first winner as a racehorse owner – all because of a dip in form on the golf course.

The 77-year-old grandad from Heighington, County Durham, swapped his golf handicap for racing handicaps when his swing went to pot.

Despite not knowing anything about racing, he bought a horse with trainer Michael Dods at nearby Denton, and he and his wife Carol named it Dancin’ Boy.

And the couple were dancing for joy when the three-old gelding easily won the Every Race Live On Racing TV Handicap Stakes at Redcar today at odds of 7-1 under a strong ride from Andrew Mullen.

Roger, a member of Barnard Castle Golf Club for 45 years, explained: "I was hitting the ball really badly and not enjoying it so I decided I needed a new hobby.

"I told my wife Carol that I was going to get a horse and she said I couldn't have one at first. But I managed to talk her round after pulling a crafty one and taking her for a nice day out at York Races.

"I knew nothing about racing but winning a race is like sinking a putt in the open. It’s definitely better than anything I’ve ever done on a golf course."

Roger, who sold his office equipment company when he retired, gave the horse a well-deserved kiss on the nose when he returned to the winner’s enclosure.

Dods, who bought the horse in Ireland as a yearling for 22,000 euros, said: “We weren’t originally going to run because we thought the ground would be too firm. It was a last-minute decision to let him take his chance. He’s a good-looking horse and he’ll improve.”

Hambleton trainer Bryan Smart described Mina Velour as “a filly with a future” after she won the Follow @racingtv On Twitter Fillies' Novice Stakes under Graham Lee. The chestnut filly by Garswood had been a promising third on her debut at Redcar in April and won despite running green.

"She's had a few little issues and is a bit dodgy in the stalls, so we've just trained her gently and let her find herself.

"Graham fought her to make her settle but she was green and got there too soon so there's more to come. We've always liked her and she's a filly with a future," said the trainer.

The horse is owned by Paul Sutherland, owner of Helmsley-based Cliff Stud, the new sponsor of the Thirsk Hunt Cup this Saturday.

Hollie Doyle is no stranger to the Redcar winner’s enclosure, and the popular rider scored a double for Lambourn trainer Archie Watson, starting with debutante Gold Venture in the opening Racing TV Club Day Here Today Selling Stakes, and following up with odds-on shot Clayton in the Watch Racing TV In Stunning HD Claiming Stakes.

Gentle Look, owned by Godolphin, trained at Newmarket by Saeed bin Suroor, and ridden by Pat Cosgrave, put up a commanding display to win from the front in the Racing TV Profits Returned To Racing Handicap Stakes.

And there was another classy Newmarket winner when Cristal Breeze, trained by William Haggas, and confidently ridden by Paul Hanagan, took the Watch Irish Racing On Racing TV Novice Median Auction Stakes.