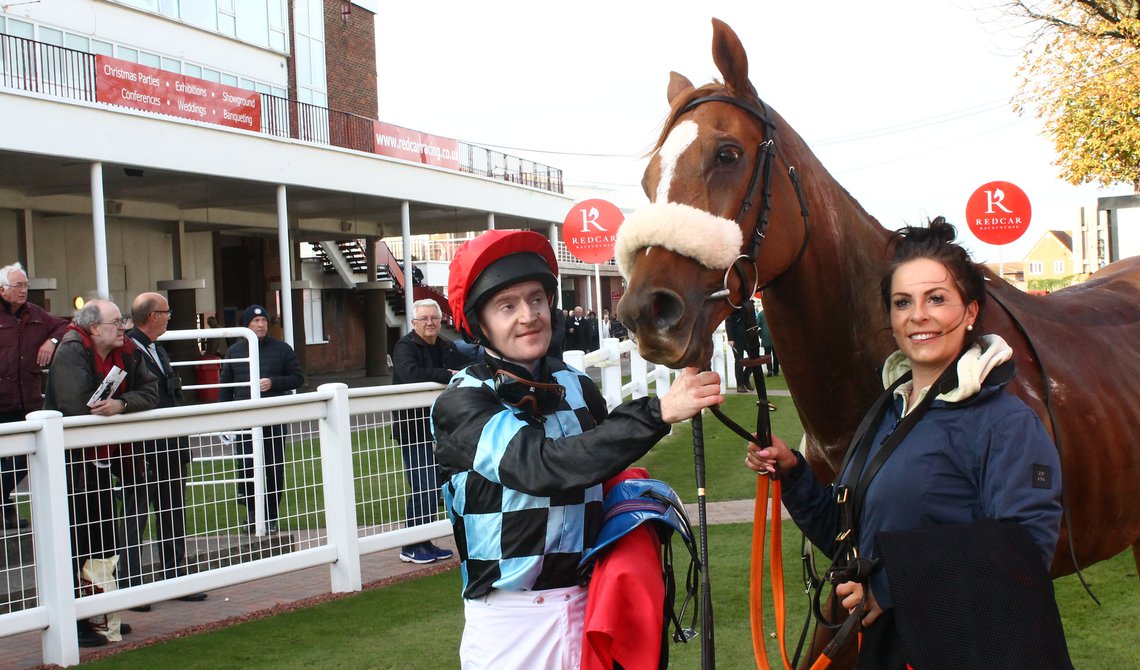 MIDDLEHAM dual-purpose trainer Stef Keniry is on a roll at Redcar, with her last three runners at the seaside track all winning.

A couple of those come back for more in Redcar’s final two races of 2018 and Keniry’s smile could well be lighting up the winner’s enclosure again on Tuesday.

Icario stayed on strongly over the course and distance under Stef’s brother-in-law Liam Keniry on October 19 and has every chance of following-up in the penultimate Racing UK Extra On racinguk.com Handicap.

Redcar’s final meeting of 2018 is another eight-race card and gets underway at 12.15pm with division one of the British Stallions Studs EBF Novice Stakes. Fresh from his historic Breeders’ Cup victory with Enable at the weekend, John Gosden’s King of Comedy should take all the beating.

The Kingman colt hasn’t reappeared since winning impressively on his debut, despite running green, at Sandown in early July. Robert Havlin, who rode Gosden’s Lord North to win at Redcar on October 19, takes the ride.

Division two doesn’t look so straightforward and the betting is likely to be the best guide. Newmarket trainers are well represented, with Roger Varian’s once-raced Dashed and William Haggas sending Dal Horrisgle for his debut. Closer to home, Michael Dods is waiting for his 50th winner of the season and Beaufort kept on well in heavy going to be third at Ayr on his second run last time, and another decent show is expected.

Malton handler John Quinn and Jason Hart teamed up to win the seller with Acadian Angel at the last Redcar meeting and they are fancied to collect the Watch More With Racing UK Extra Selling Stakes with Benjamin Thomas. He ran down the field in a handicap at Redcar last time but ran well enough to be placed in handicaps at Ayr and Hamilton before that.

Tim Easterby will finish 2018 as Redcar’s leading trainer and he could go out with a bang, starting with Parys Mountain in the Watching Racing UK On Sky 426 Handicap. He was eased close home when winning at Catterick last time and Jason Hart again takes the ride.

Easterby may well score a quick-fire double with Mikmak in the Watch Racing UK In Stunning HD Handicap. Third in a Class 2 Handicap at York last time, this Class 3 contest looks well within his grasp, with Rachel Richardson in the saddle. Tom Tate’s Awake My Soul won this race last season and, although now a nine-year-old, is clearly still in good heart judged by his comfortable win at York last time.

Richard Fahey has had another tremendous season and his Andok, ridden by former champion Paul Hanagan, looks ready to return to winning form in the Watch Racing UK Anywhere Claiming Stakes, having had a dabble at a novice hurdle at Huntingdon a couple of runs ago.

The danger looks to be Newmarket raider Lady Alavesa, who has won a claimer and a seller at Leicester on her last two runs. Trained by Gay Kellaway and ably assisted in the saddle by Josephine Gordon, another bold display is anticipated.