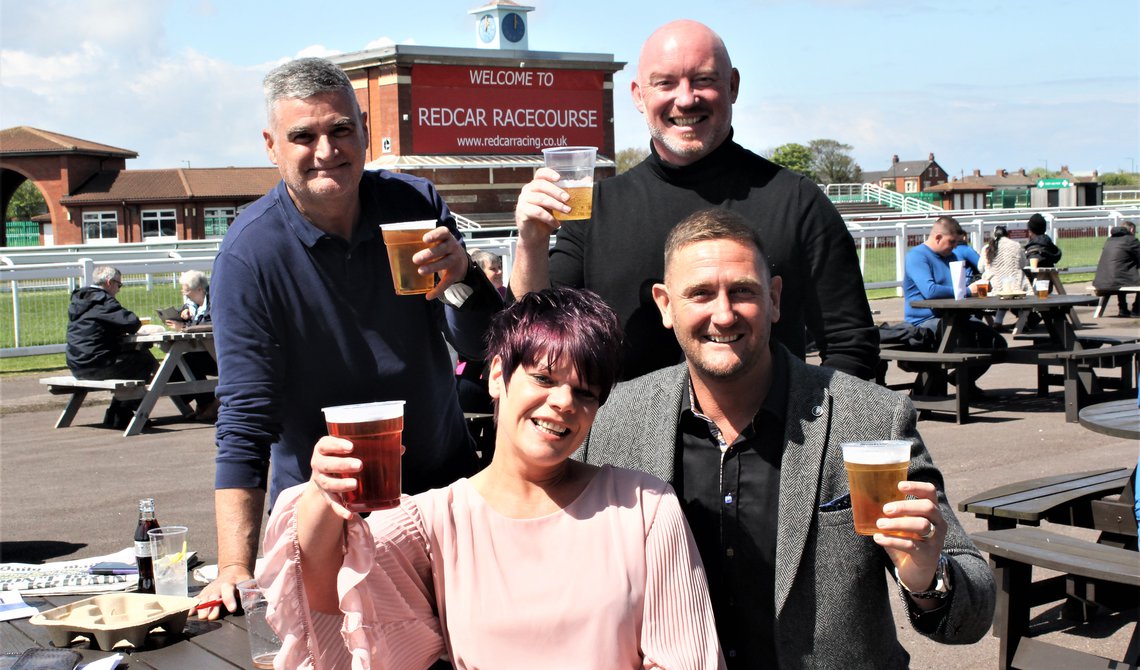 THE long wait was finally over for horse racing fans today (Monday) as spectators returned to sunny Redcar for the first time since October 2019.

The seaside track was one of five UK racecourses that opened its doors to the public – along with Carlisle, Leicester, Windsor and Ffos Las – as lockdown restrictions were lifted.

First through the Redcar gates were Mark and Sandra Keelty, from Coulby Newham. Mark said: “We’ve been club members here for a long time and it’s just brilliant to be back after so long.” 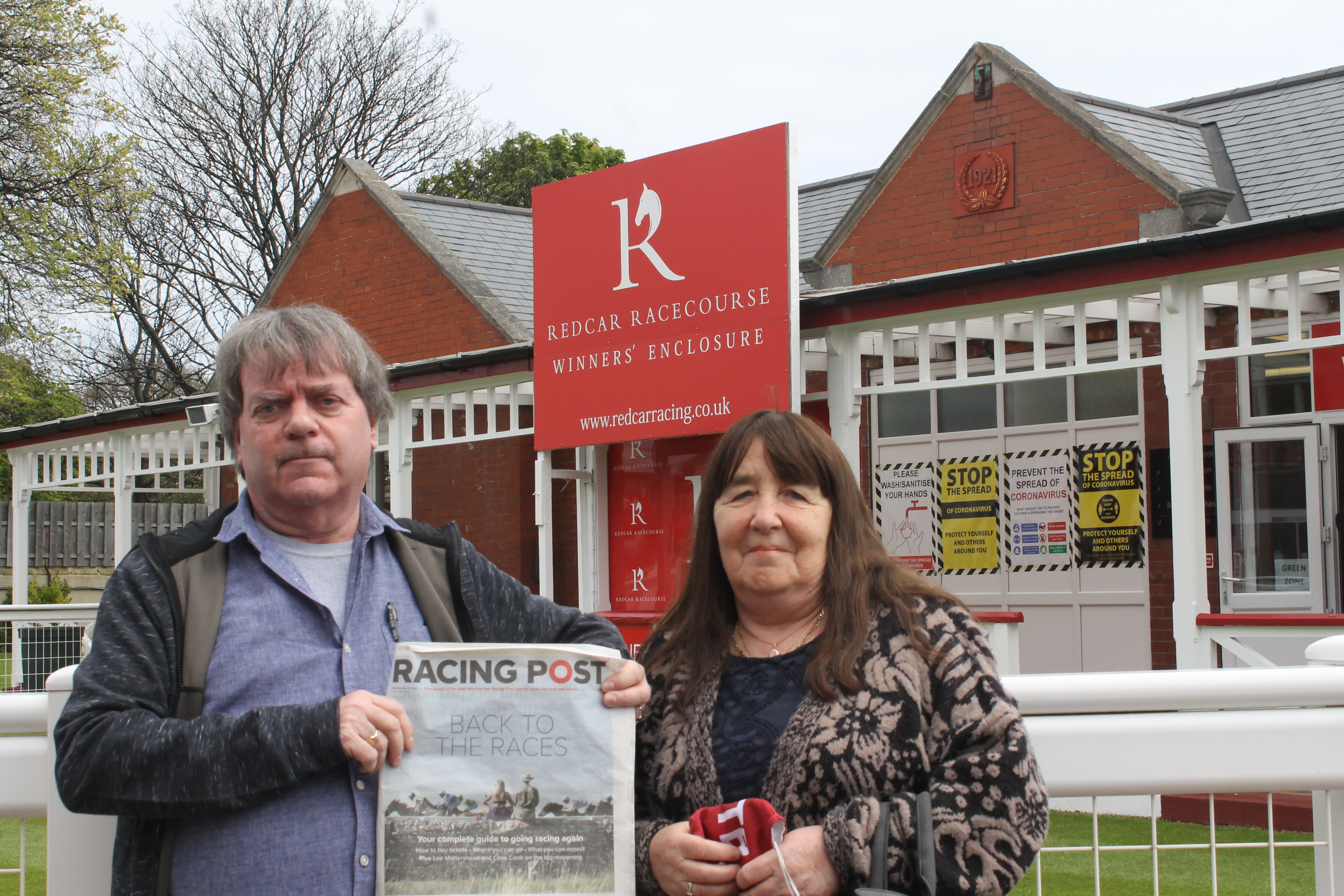 Next in were brothers Nathan and Wayne Richardson. Nathan, from Scarborough, said: “We go all over the country, enjoying racing, and we really like Redcar. It’s such a friendly place and a really good track so it’s brilliant to be back.” 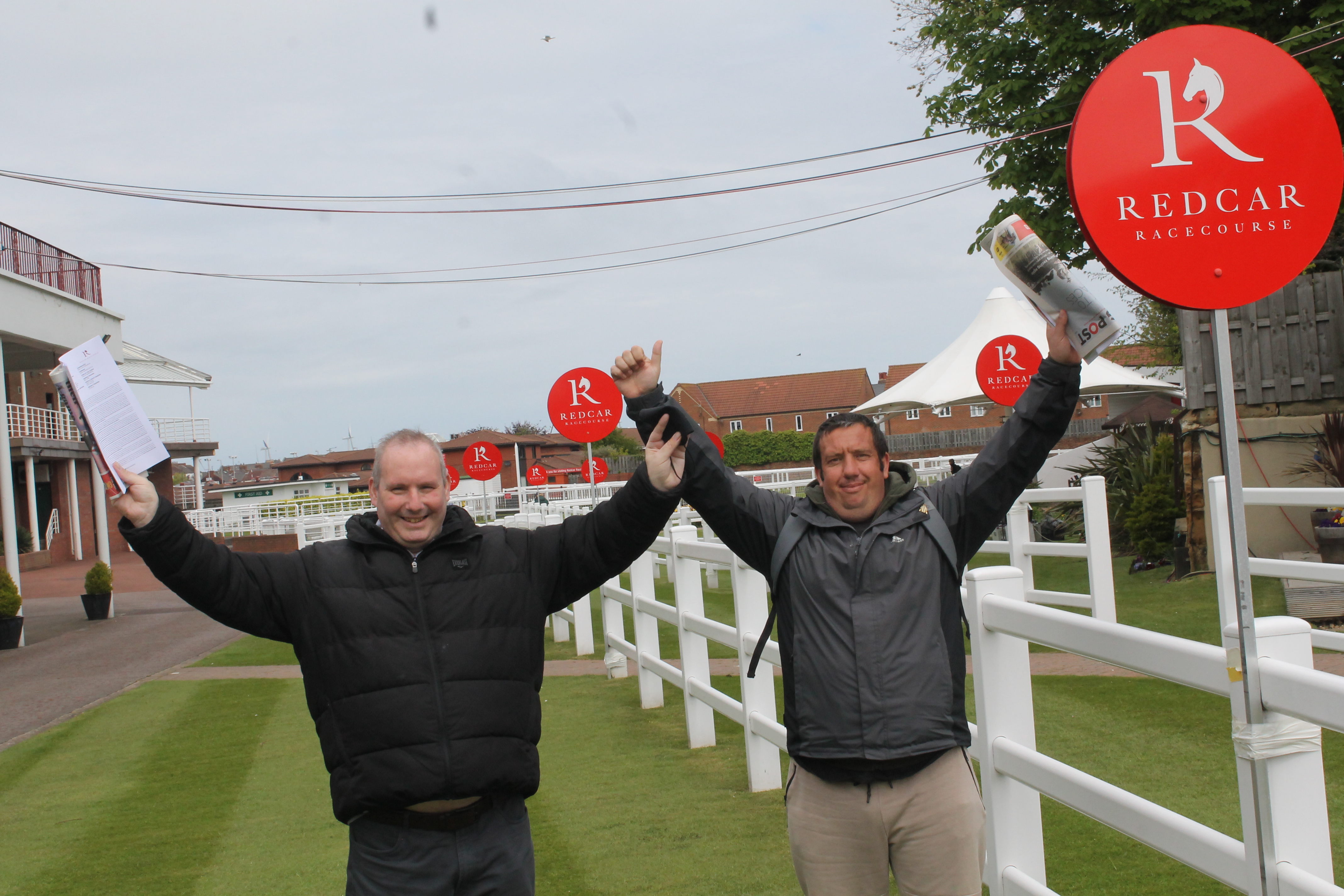 John Baxter and friend Chris Varley travelled from West Yorkshire to have a day at the races. Chris, from Haworth, said: “We set off at quarter past seven this morning, had our breakfast on the seafront, and now we just want to see some live racing – it’s much than watching it on the telly!” 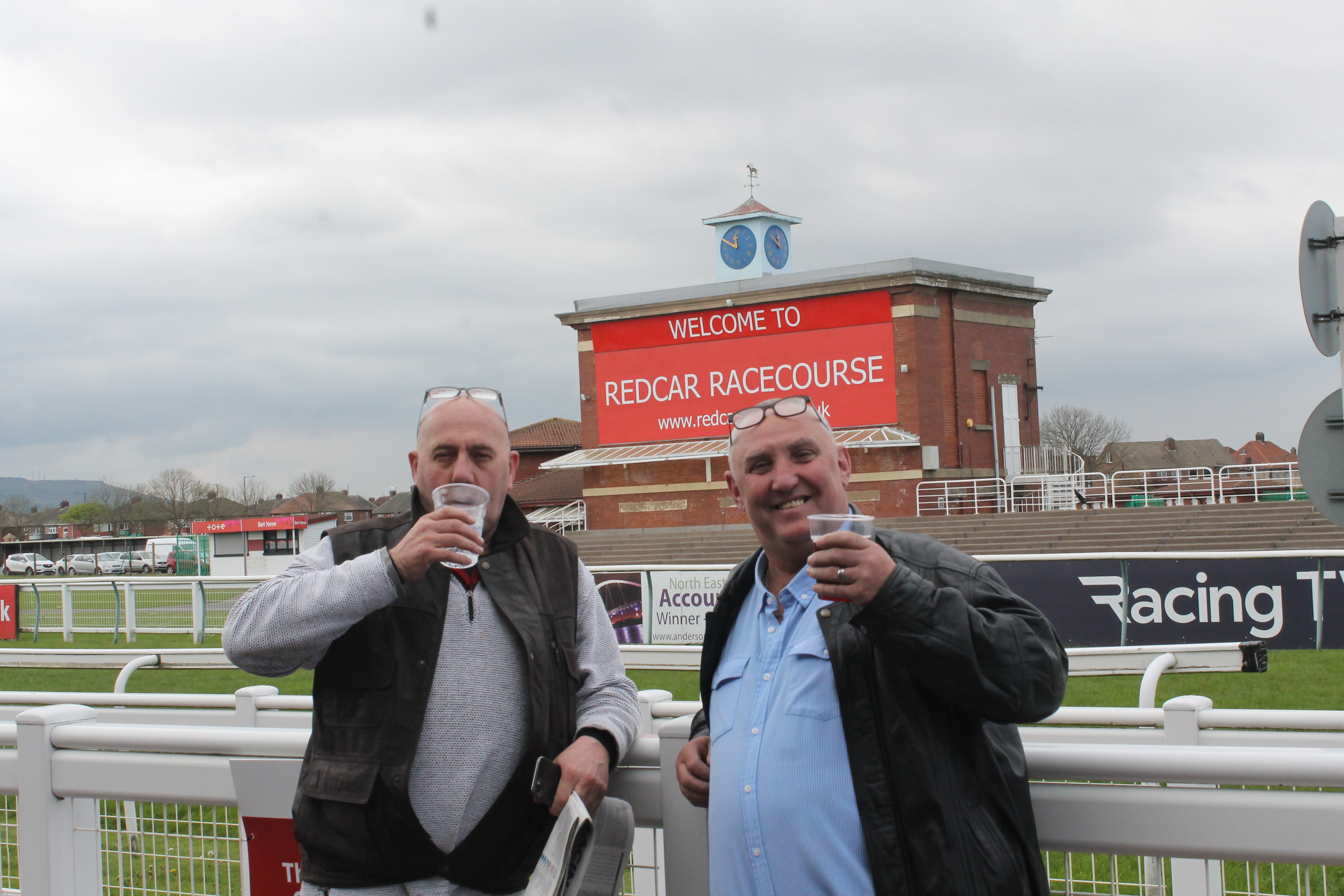 Bookie Richard Johnson said: “I haven’t slept for two nights because I’ve been that excited. It’s absolutely brilliant to be back, knowing there’s going to be some people here, and seeing some colleagues. It’s a quiet start but this is a good place to get going again.”

Redcar is operating at 50 per cent capacity for its meetings on May 31 and June 1 before returning to 100 per cent capacity on June 18 and 19. However, strict safety measures were in place for today’s meeting, including temperature testing, a medical questionnaire, facemasks, social distancing, and numerous hand sanitiser stations.

Meanwhile, on the track, the returning crowds may have seen a star in the making as Sir Michael Stoute’s Potapova turned The racingtv.com Fillies’ Novice Stakes into a procession. 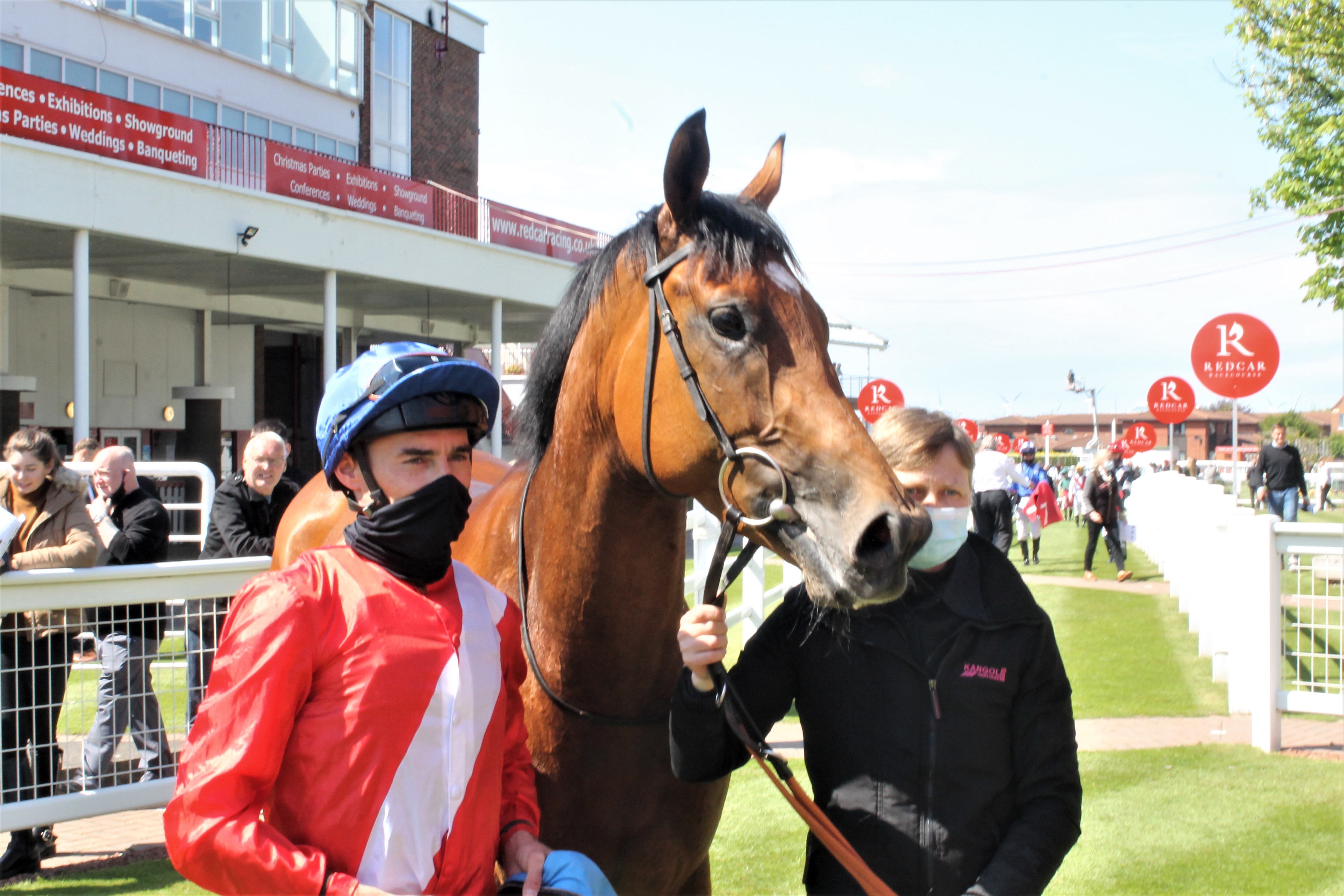 The Invincible Spirit filly is entered in the Group 1 Coronation Stakes at Royal Ascot, and the 1-5 shot oozed class in winning by eight lengths without Danny Tudhope moving a muscle.

The jockey said: “She was very impressive and is obviously very smart. This is a stepping stone to bigger things but she’s got class alright.”

Tudhope made it a double later in the afternoon when landing the racingtv.com EBF Restricted Novice Stakes (Division 2) in a driving finish on the David O'Meara-trained debutante Miss Houdini. 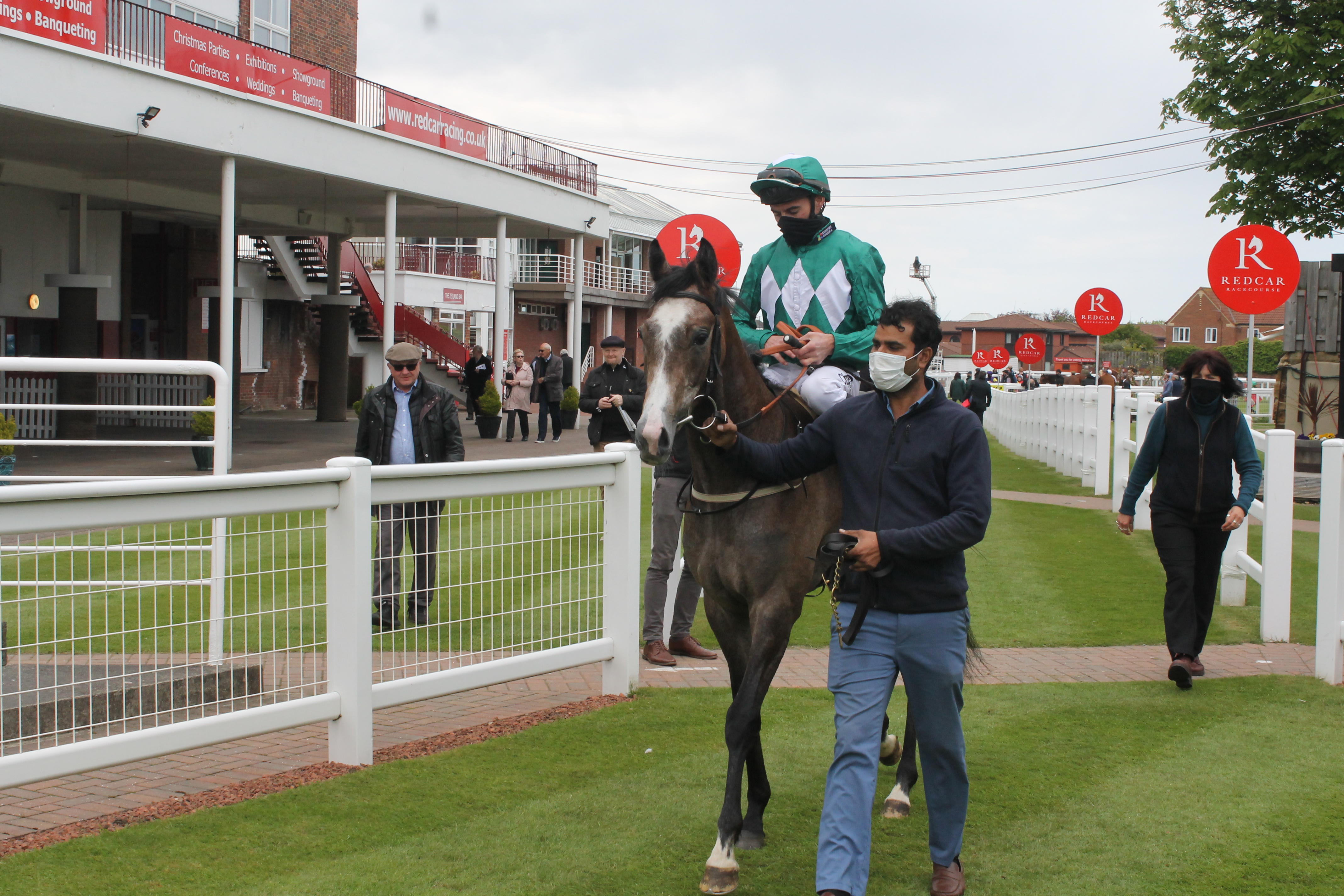 The eight-race card got under way with Grangeclare View, trained at Malton by Richard Fahey and ridden by Tony Hamilton, landing The Great To Welcome You Back Median Auction Stakes.

Hamilton said: "Even cantering down, you can see everyone's enjoying themselves and it's great for the sport." 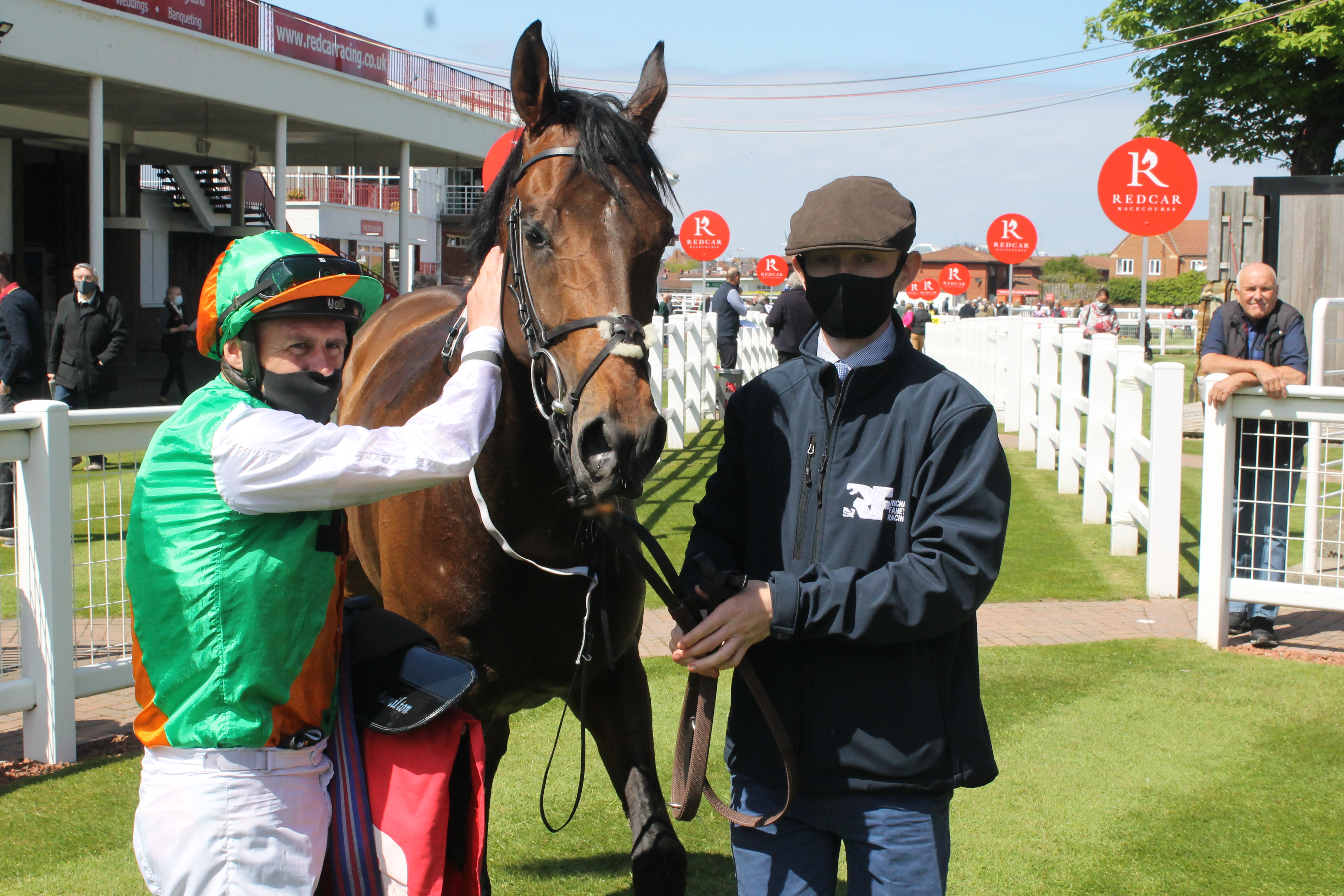 Fairhurst said: "She's handicapped 10lbs less on turf than the all-weather so she was well in today. She looked like she'd win cosily at the furlong pole but had to battle in the end." 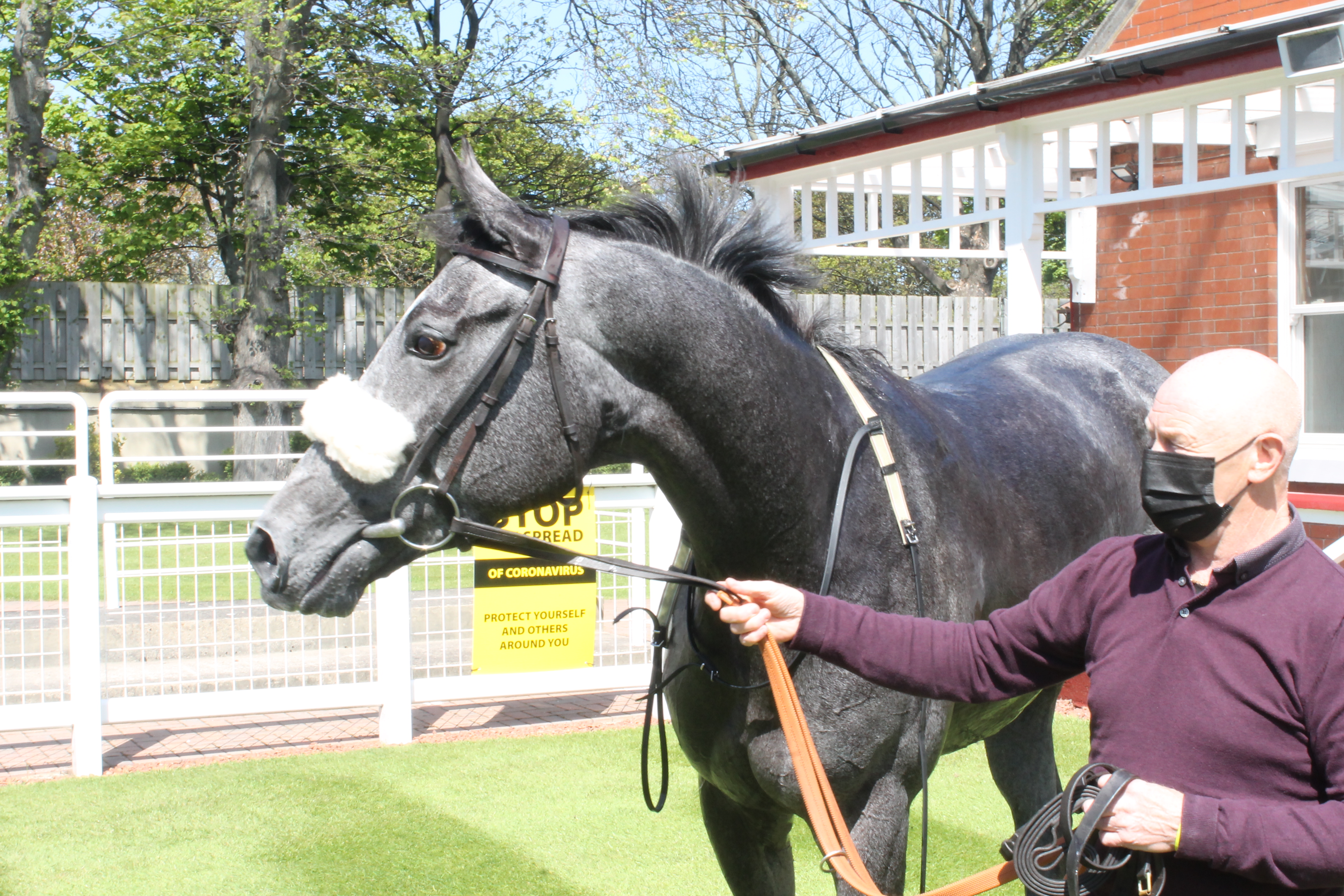 Owner John Clasper said: “It’s a dream come true. We thought she’d take a step forward from her first run when she was fourth at Southwell but didn’t expect that.”

Mr Clasper, chief executive of Eden Housing Association, explained that the filly’s name came as a result of a family joke.

He used to be in The Bottom Liners syndicate that owned a horse called Ellaal, which won 11 times when trained by Ruth Carr. When the horse retired, John took it home to Penrith and learned to ride on it.

“My children used to joke that I loved it more than them – saying it was my favourite child. That’s where the name came from when I got this filly as a yearling.”

Kind Review scored a seventh career win in the Watch Racing TV In Stunning HD Handicap. Trained at Spennymoor by Tracy Waggott, and ridden by Tom Eaves, the gelding is owned by partners Elsa Crankshaw and Gordon Allan.

Mr Allan revealed that Kind Review had been bought as a two-year-old for just £800 from Godolphin at the Doncaster Sales, and he had already won £37,000 before today’s race.

The trainer said: “We thought he’d run well at York last week, but he missed the break. He’s a really good horse and we expected him to go well today. We’re over the moon.” Navajo Spring, trained at Denton by Michael Dods and ridden by Connor Beasley, broke her maiden in style in the Join Racing TV Now Handicap Stakes.

Owner Doug Graham said: “I told everyone this morning to back her. She’s by Charm Spirit who’s got off to a good start as a sire and Michael hopes she’ll progress further.” King Viktor, trained by Brian Ellison and ridden by Ben Robinson, made it a hat-trick by easily landing the final race, the Watch Racing TV On Sky 426 Handicap Stakes. 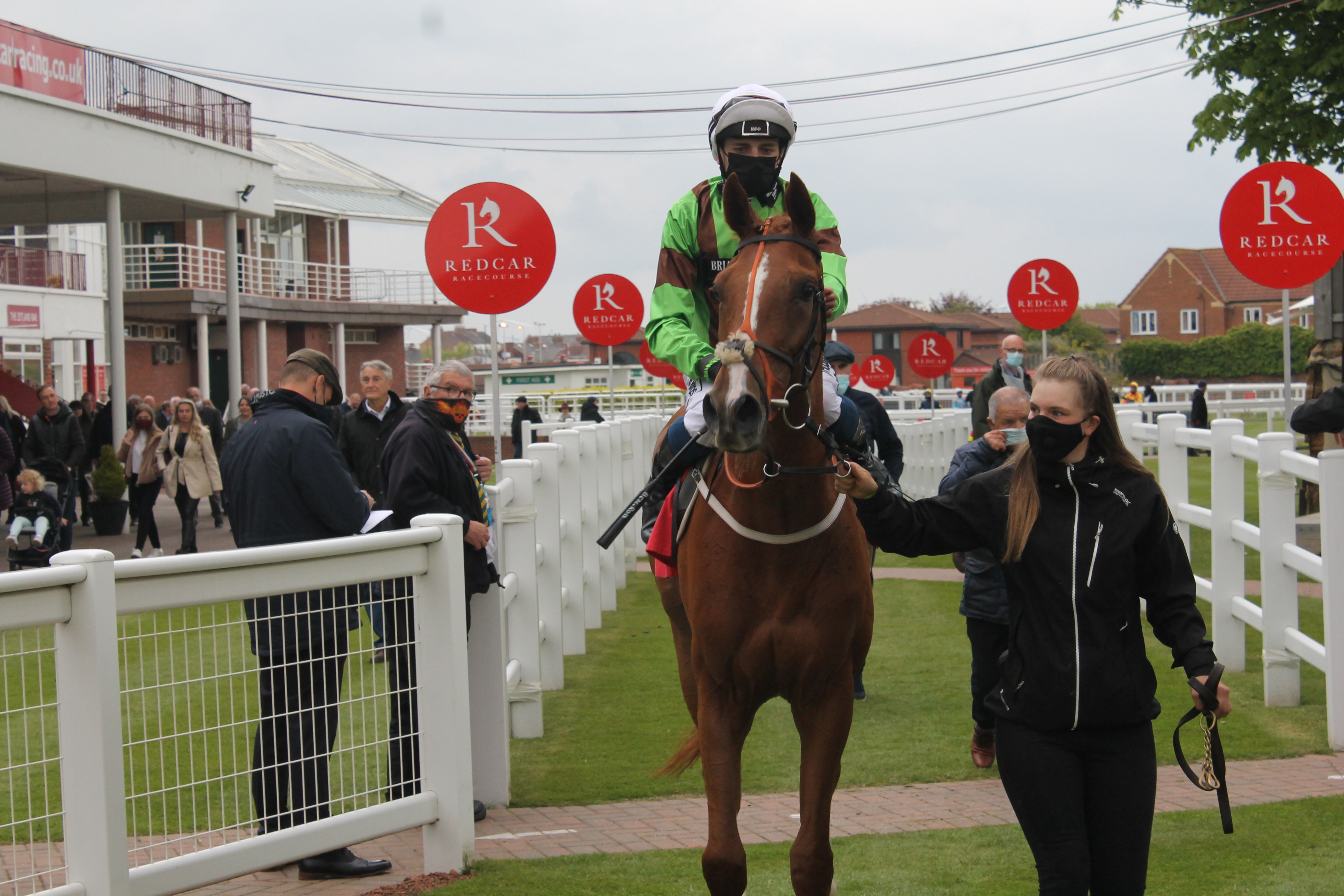