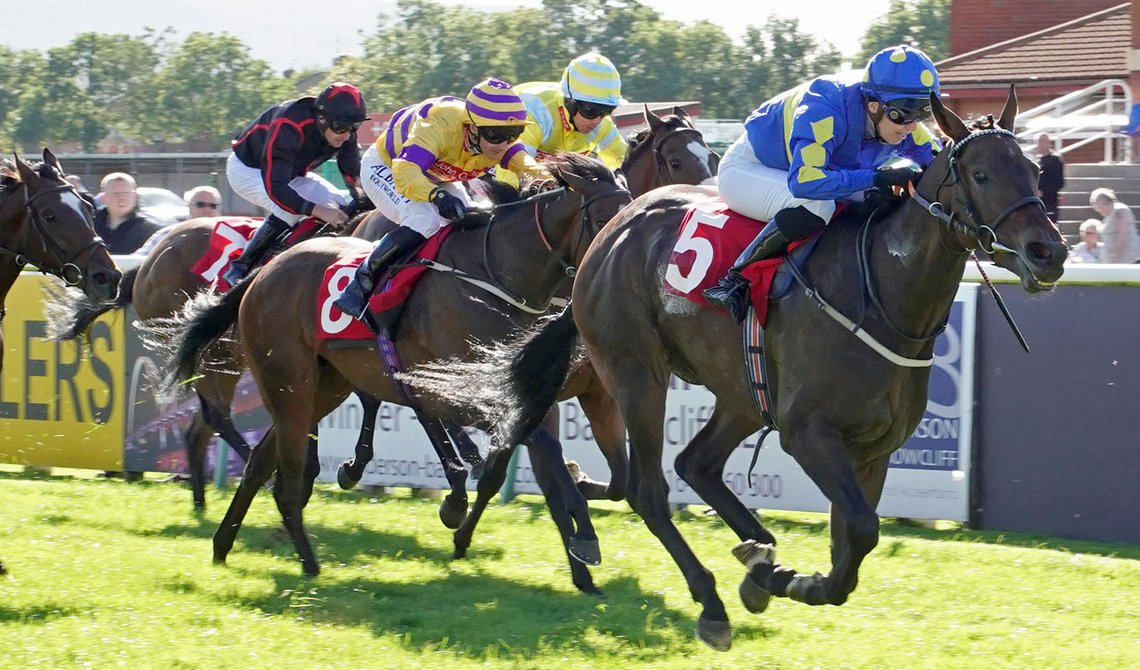 Karen, who trains at Osmotherley, in North Yorkshire, struck with Sweet Madness and Freak Out – with three-pound claimer Gemma guiding both first past the post.

Sweet Madness doesn’t show much at home but a step up to a mile proved the key in The Free Month of Racing TV Nursery Handicap. 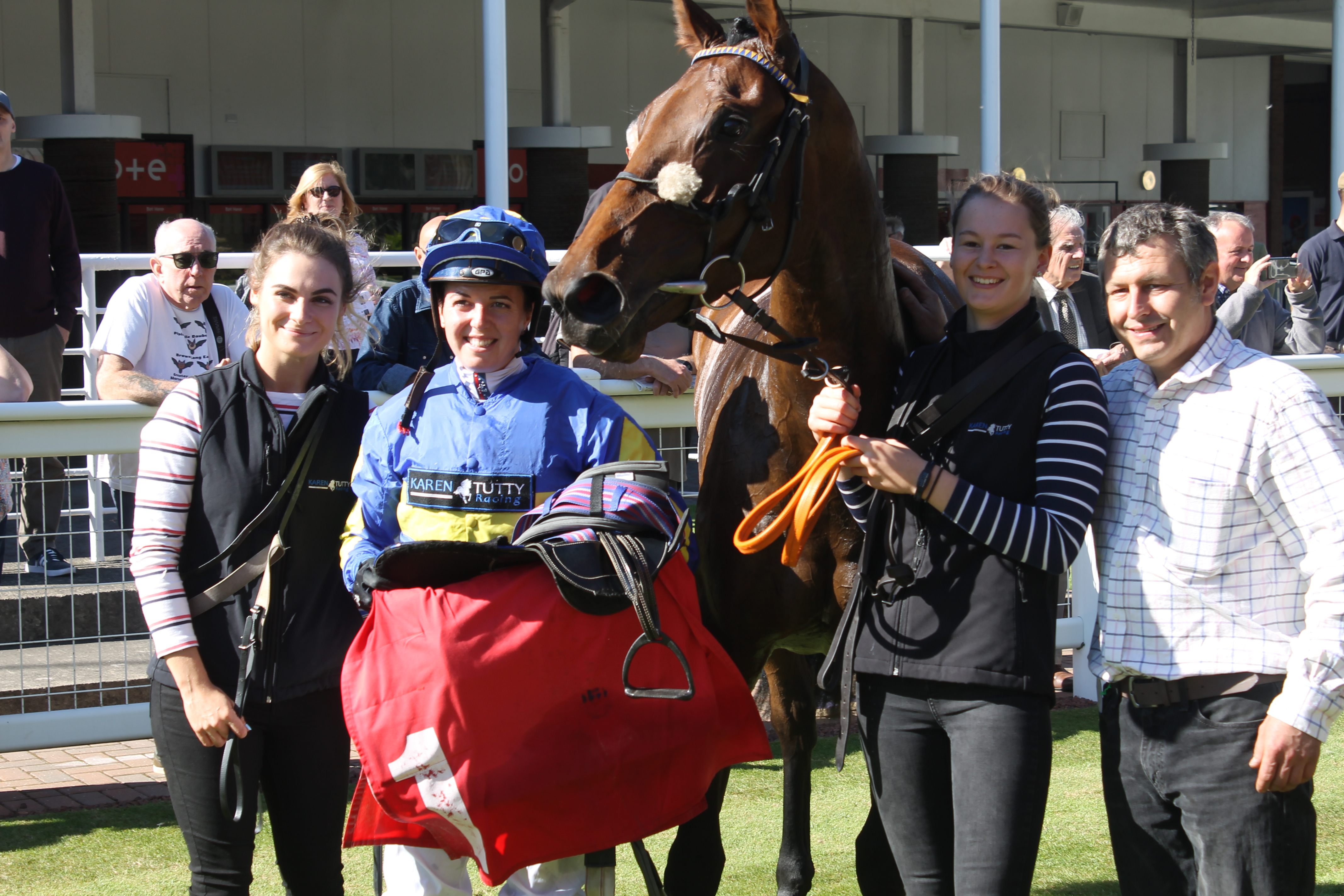 “It’s just taken a while for her to get her head around things and she’ll have learned a lot, so hopefully, she’ll go on from here,” said Gemma.

She added that she was hoping for a good run from Freak Out later in the afternoon – and her optimism proved well-founded when the Kodiac gelding won at 8-1 (see main picture).

“We were drawn on the wing at Chester last time and things didn’t work out but we dropped three pounds for that and it put him in with a real chance,” said the rider. 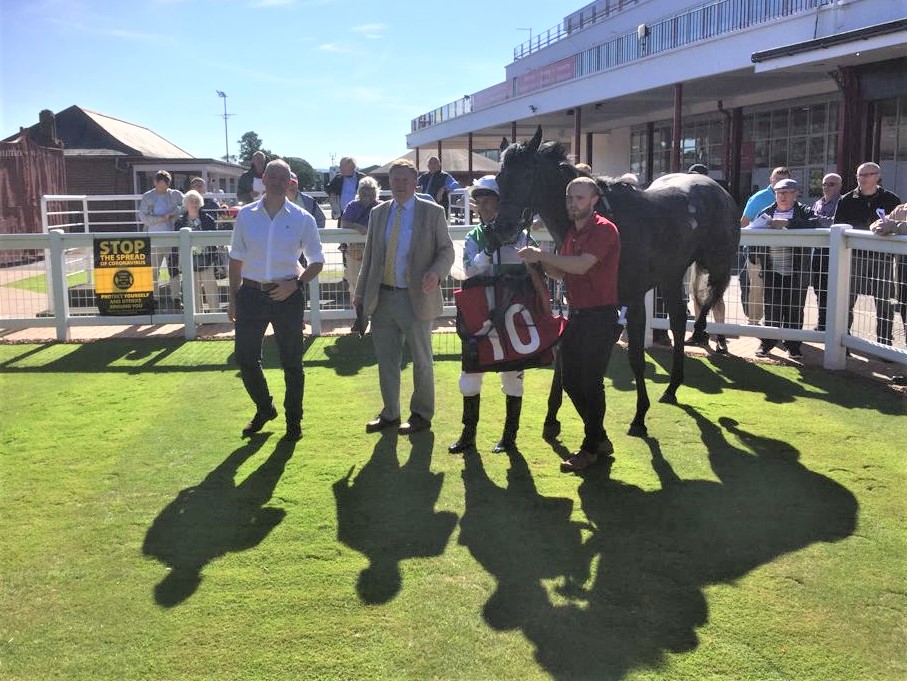 The Malton trainer said: “She ran a good race at Doncaster last time when she was in at the deep end a bit. She still needs to fill out, so she’ll be a nice one for next season – definitely something to look forward to.”

Mr Davies, founder of the Arabian Shield insurance company, was represented by his son Julian, who said: “With every outing, she’s given us a building block and helped us plan the next step by showing her potential. She’s unfurnished and will only get better.”

Another promising prospect emerged in the British EBF Future Stayers Maiden Stakes in the form of the William Haggas-trained Vintage Choice (pictured below) who got the better of Roger Charlton’s Out From Under by a nose under Cieren Fallon. 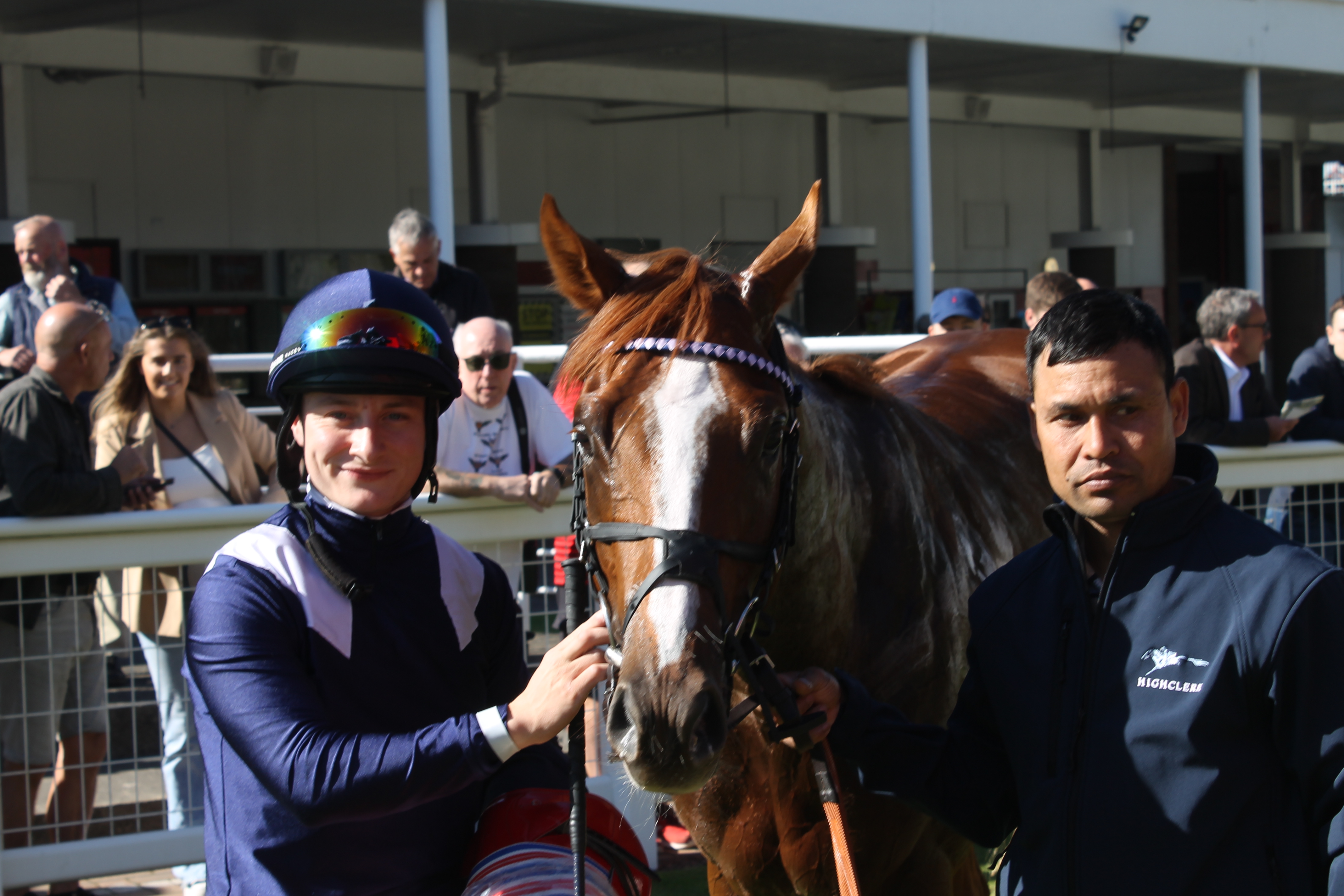 The compact Lope de Vega colt had shown promise with a debut third at the York Festival last month and looks sure to progress.

There was another Newmarket success when the George Scott-trained Strawberry Jack (pictured below) proved the pick of the bunch in The racingtv.com/freemonth Selling Stakes. 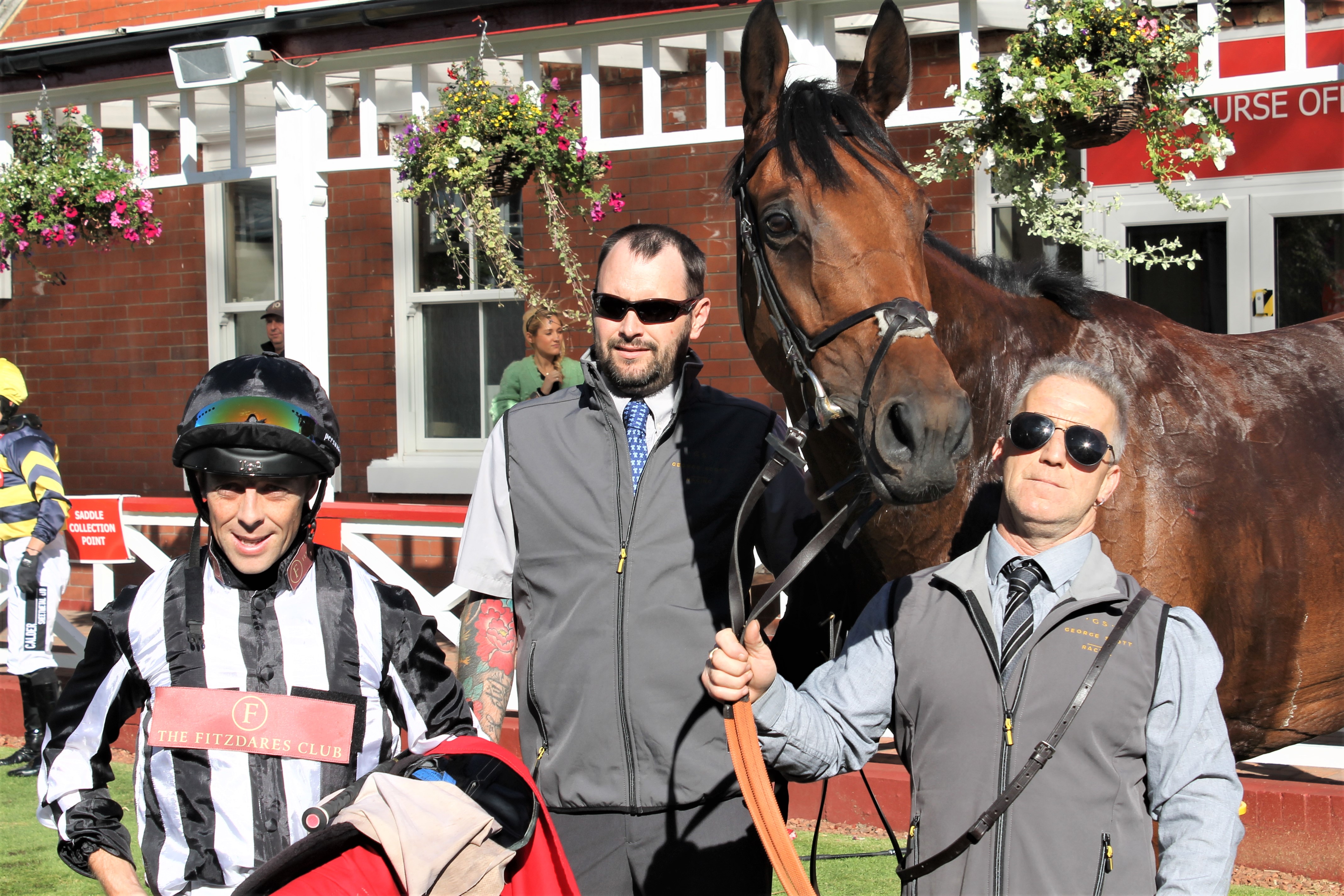 The gelding appreciated the drop in class under Ben Curtis and the yard had to go to 14,000 guineas to buy in the five-time winner.

Jockey Connor Beasley stayed cool in a close finish to land the Start Your Racing TV Free Month Now Handicap on Polam Lane, owned by David Jones, who has an air-conditioning company in Chester.

Mr Jones said: “I can’t describe what a wonderful feeling it is to have a winner and I’ve been very lucky over the years.”

Polam Lane (pictured below), trained at Thirsk by David Barron, is out of a dam called, La Zamora, which was the trainer’s 1,000th winner. La Zamora’s owner was from Darlington and Polam Lane is named after a street close to the town centre. 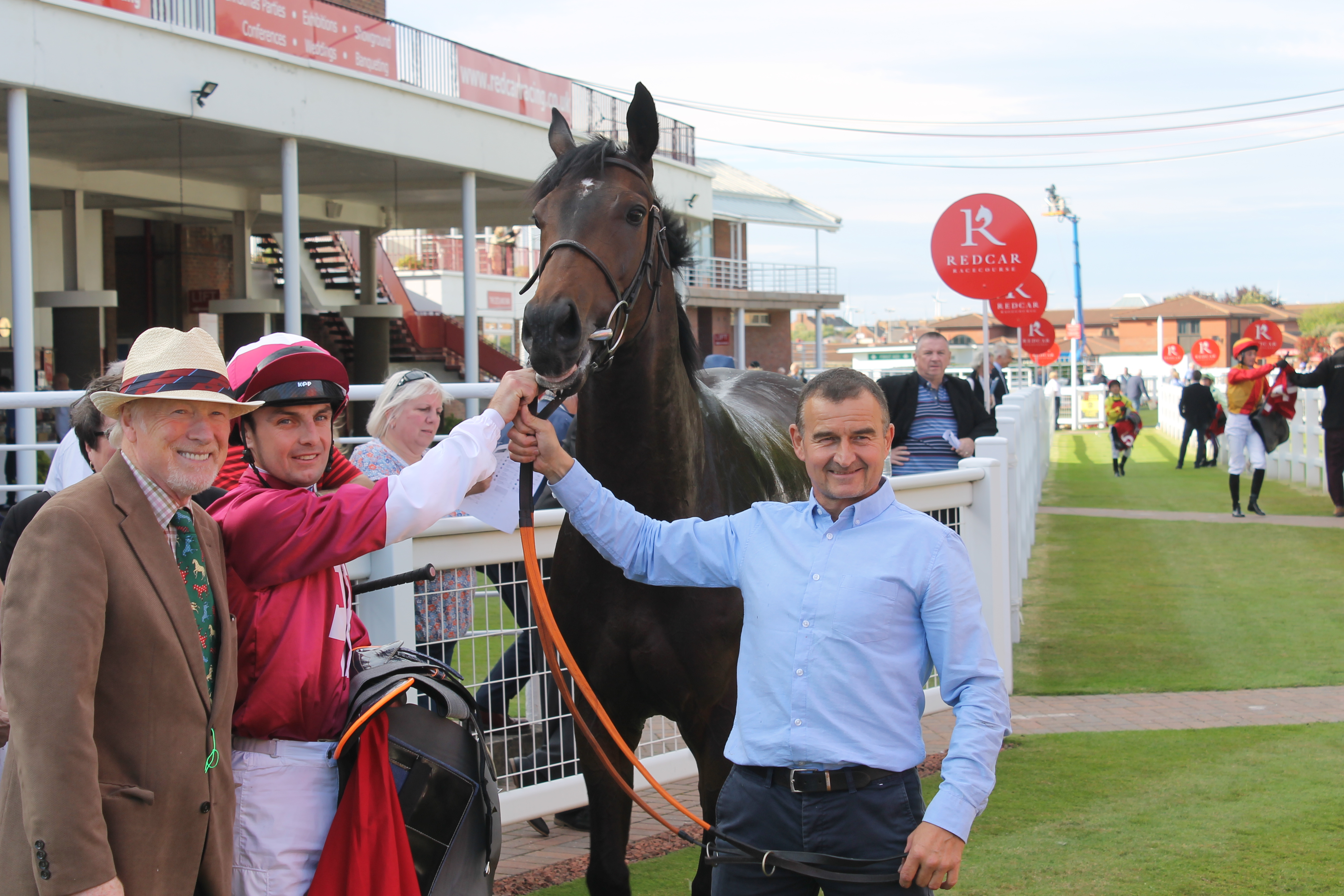 The spoils went back down south in the following Start Your Racing TV Free Month Now Handicap, with Miss Bella Brand (pictured below), trained at Newmarket by Ilka Gansera-Leveque, justifying favouritism under George Wood. 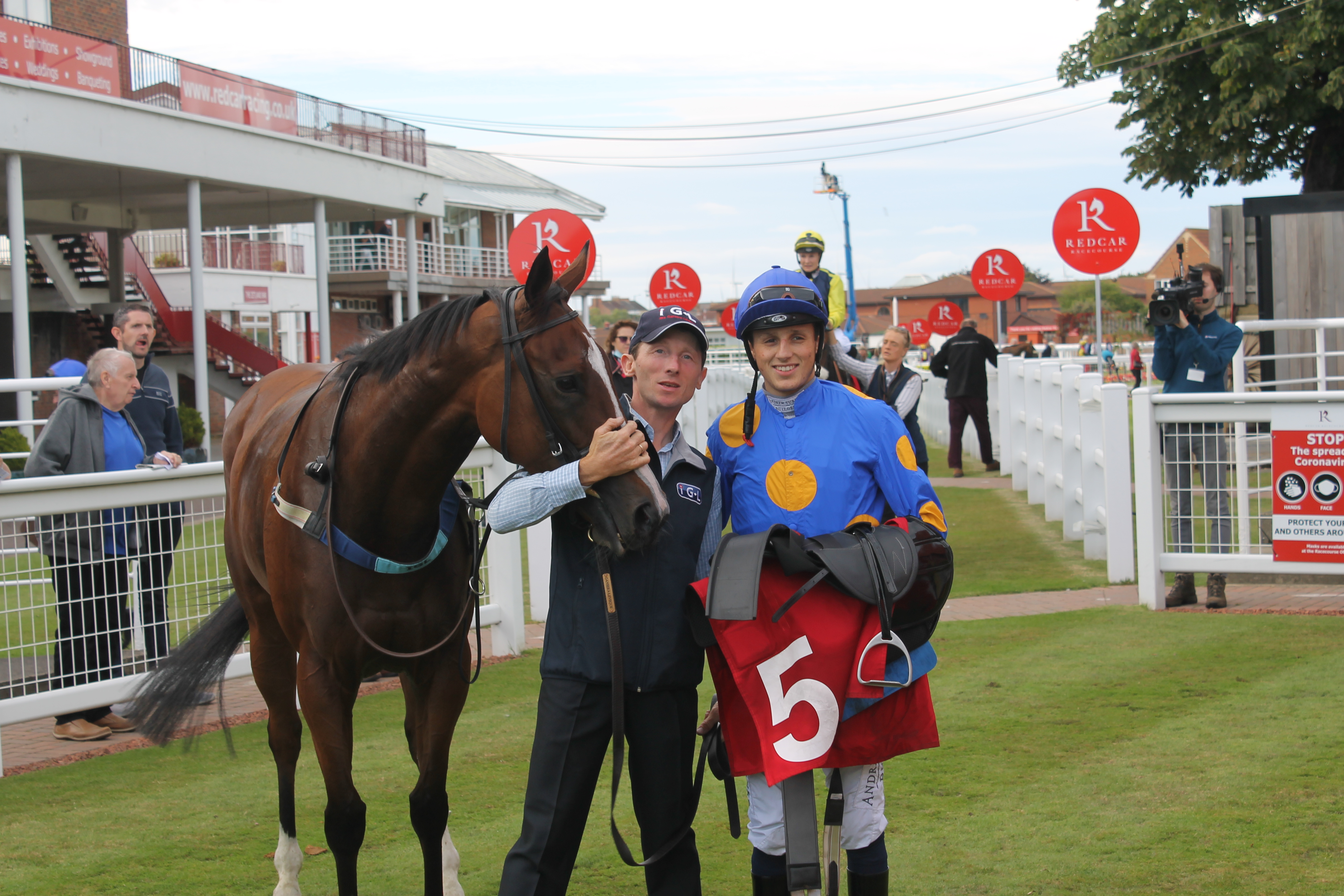 And there was a poignant end to the day’s racing when High Security landed the Watch Race Replays At racingtv.com Handicap from fast-finishing favourite Albegone.

Owners Alan Smith and Andrew Pear, controlling directors of a medical manufacturing business in Stoke, lost a horse in a freak training accident during the week but High Security gave them what Andrew described as “a fabulous end to a very sad week”.

The Acclamation gelding (pictured below), ridden by Rowan Scott and trained at Malton by Nigel Tinkler, was winning for the first time in 18 tries, and Andrew added: “I just think he knew we’d had a bad week and wanted to cheer us up!”