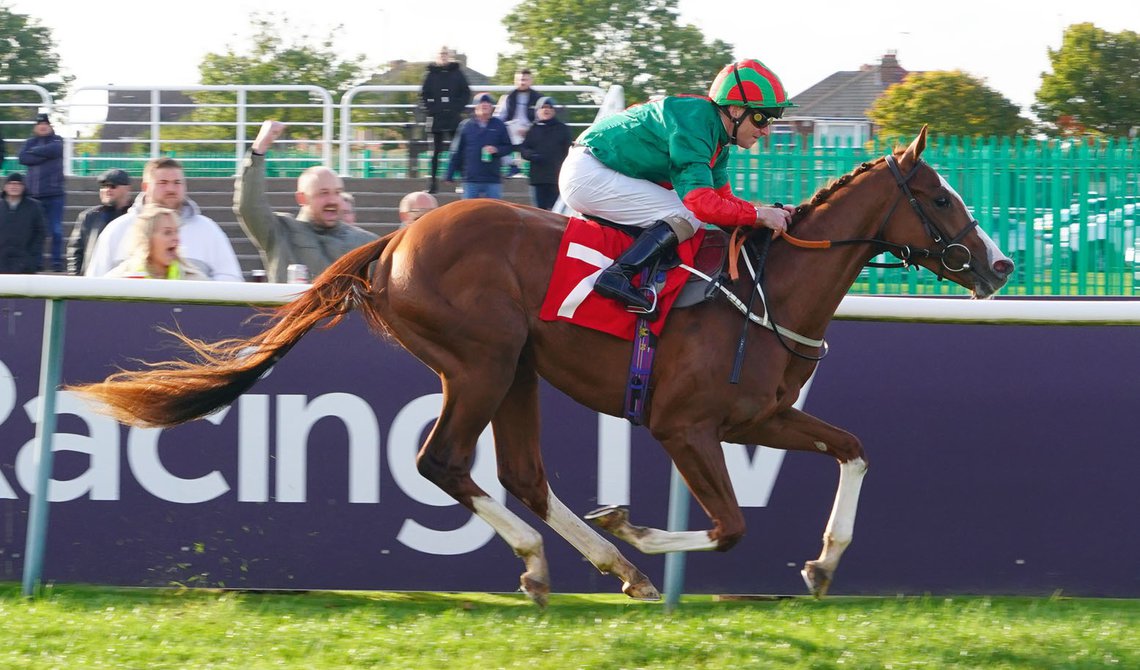 IT is 28 years since the legendary Double Trigger won by 10 lengths on his debut at Redcar for Middleham trainer Mark Johnston.

Now, Trojan Horse – carrying the same famous red and green colours of Ron Huggins – has won the race named in honour of one of the greatest stayers in a generation.

And there was a real sense of déjà vu at the seaside track on Racing TV Club Day, with the chestnut son of Ulysses bearing a striking resemblance to Double Trigger.

Trojan Horse struck for home well out under Joe Fanning and stayed on decisively from the William Haggas-trained Three Start to land the EBF Double Trigger Novice Stakes. 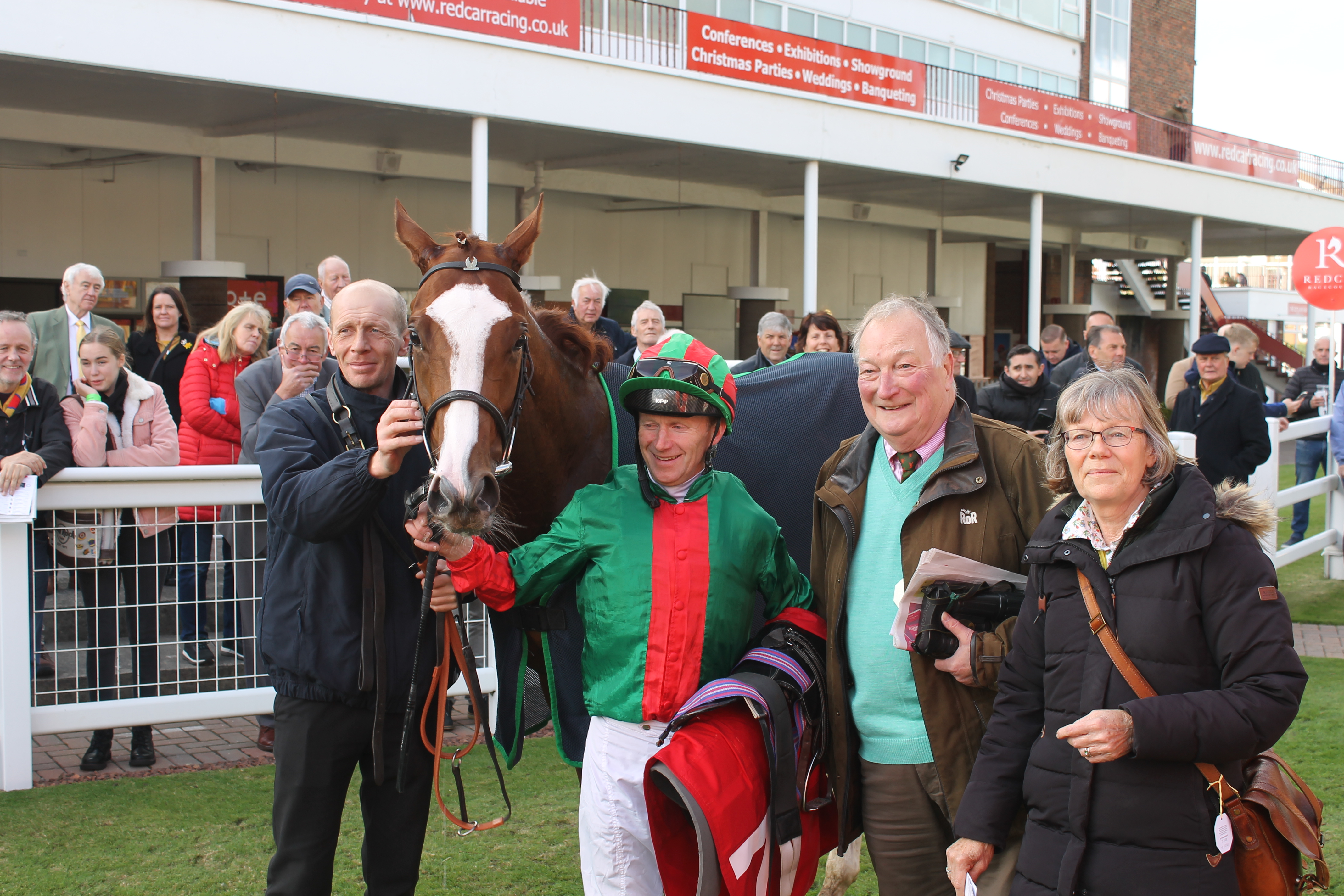 Mr Huggins, who owns the horse with George Tiney, of Atlantic Racing, said: “He’s a really nice horse. He moves really freely in the style of a proper staying horse and it’s fantastic to win the race named after Double Trigger.”

Mr Huggins picked out Trojan Horse after seeing a video of him ahead of the Tattersalls sale in December: “I told Mark I thought he looked a nice horse and he bought him.”

The Redcar race was earmarked for Trojan Horse after he was a promising third on his debut at York.

Deidre Johnston said: “All he needs is a flaxen mane and tail and he’d be a dead-ringer for Double Trigger. We’ve given him plenty of time and this was the obvious race after York.

“Seeing those colours win here at Redcar tears at the heart-strings. It brings back such amazing memories of special times.”

Emperor Caradoc, trained at Hambleton by Bryan Smart, looked another nice horse for the future after winning the opening Racing TV Club Day EBF Novice Stakes by a head with Graham Lee in the saddle. 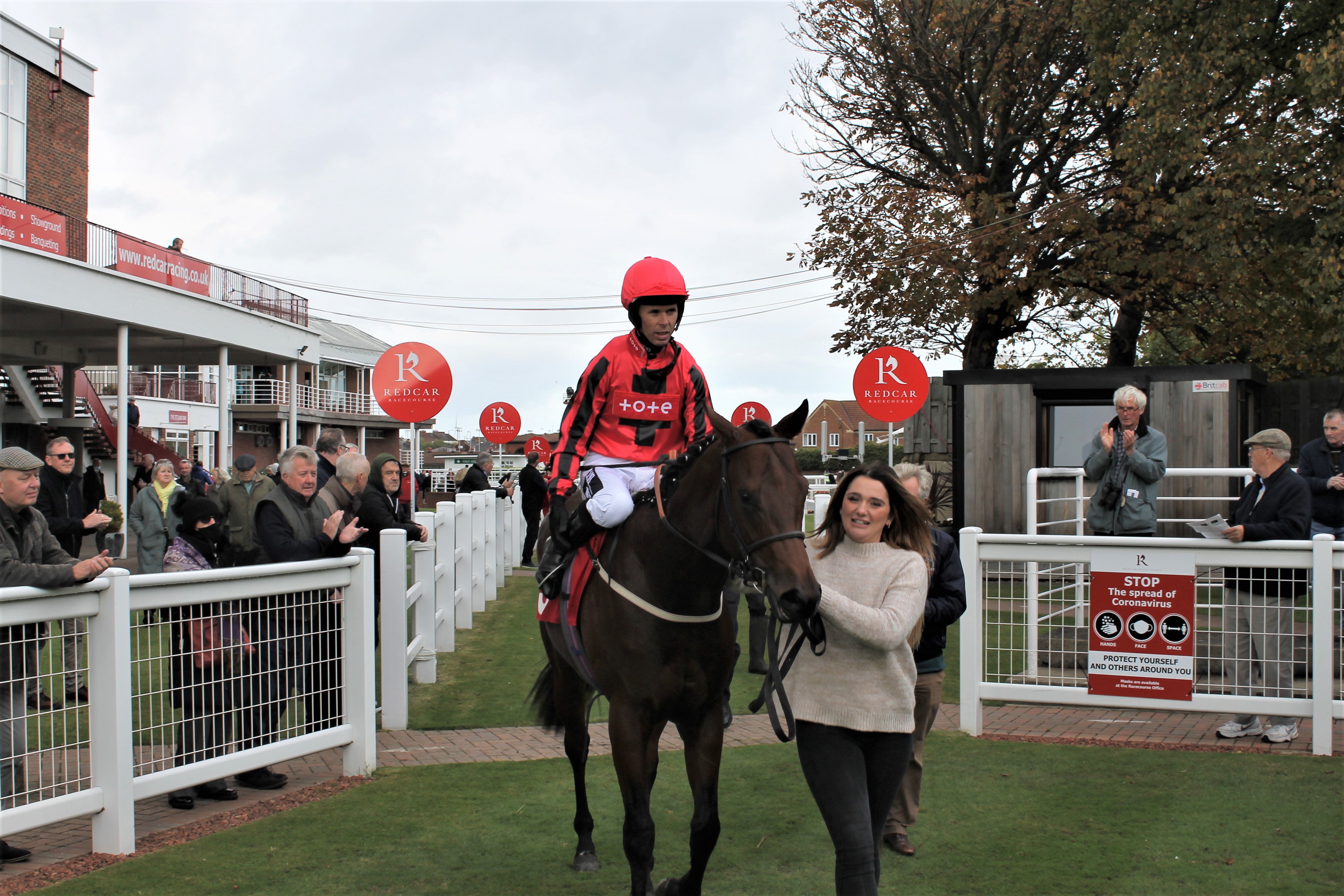 The race was a competitive affair, with Mark Johnston’s Baileys Accolade in second and the Michael Dods-trained Sezaam running another good race under a penalty in third.

Smart said: “The horse will come on again because Graham said he was still green and looking around on the rail. He was only just doing enough and there’s a lot more to come.

“He’s been a bit slow coming to hand, but I really like this horse and he loves this ground. He’s definitely one to look forward to.”

The Siyouni colt is owned by Steve Bradley and Dan Maltby, who both worked in financial services. Steve, who lives near Wetherby, said: “He was sold at the Goffs breeze-ups and we bought him as a two-year-old. He’s a really nice horse who will only get better.”

The trophy was presented by members of the Racing TV Club (pictured below). 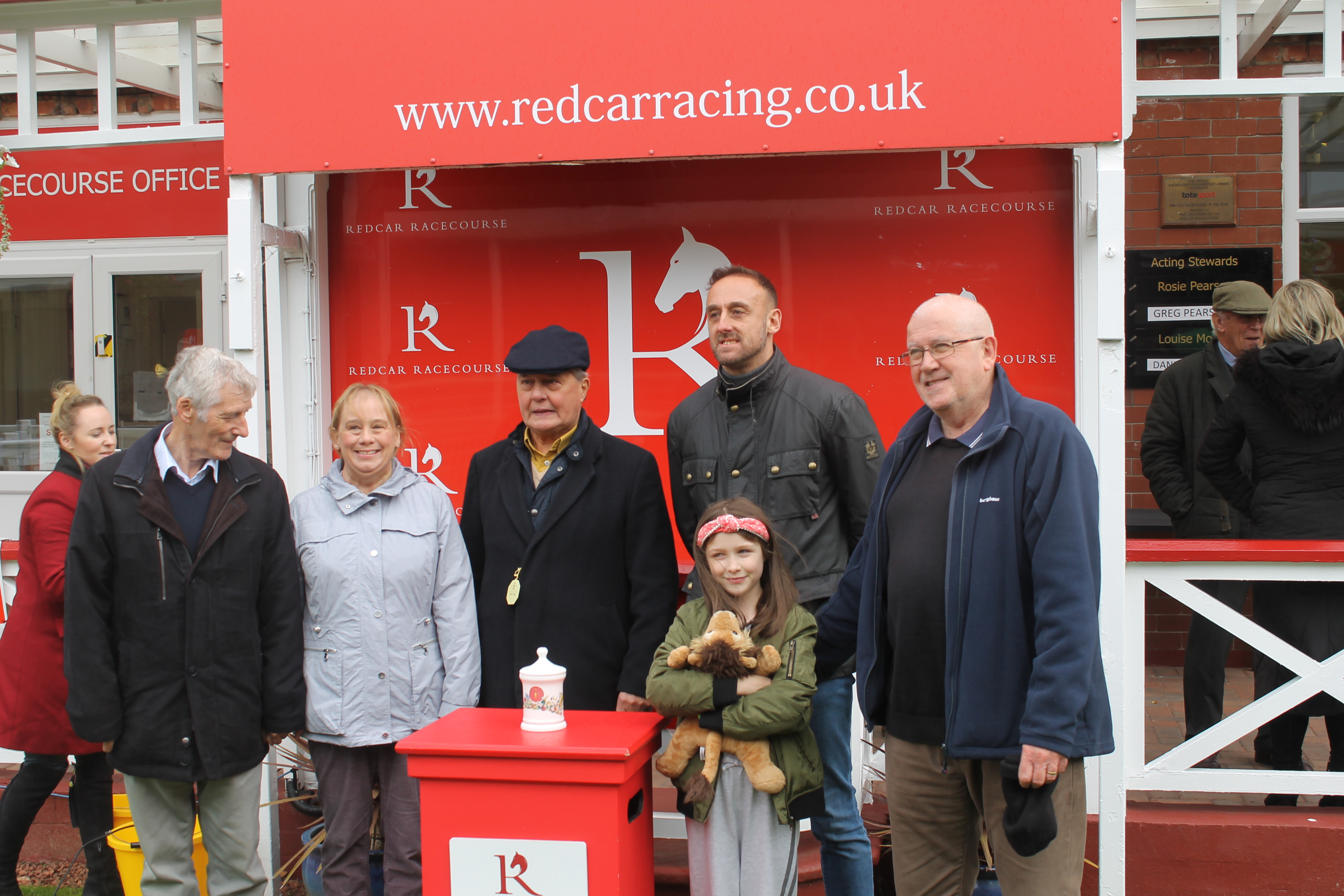 Mujtaba (pictured below) made it three out of three as he easily claimed the Join Racing TV For The Jumps Season Handicap for Newmarket trainer William Haggas and jockey Dane O'Neill at surprisingly generous odds of 100-30. 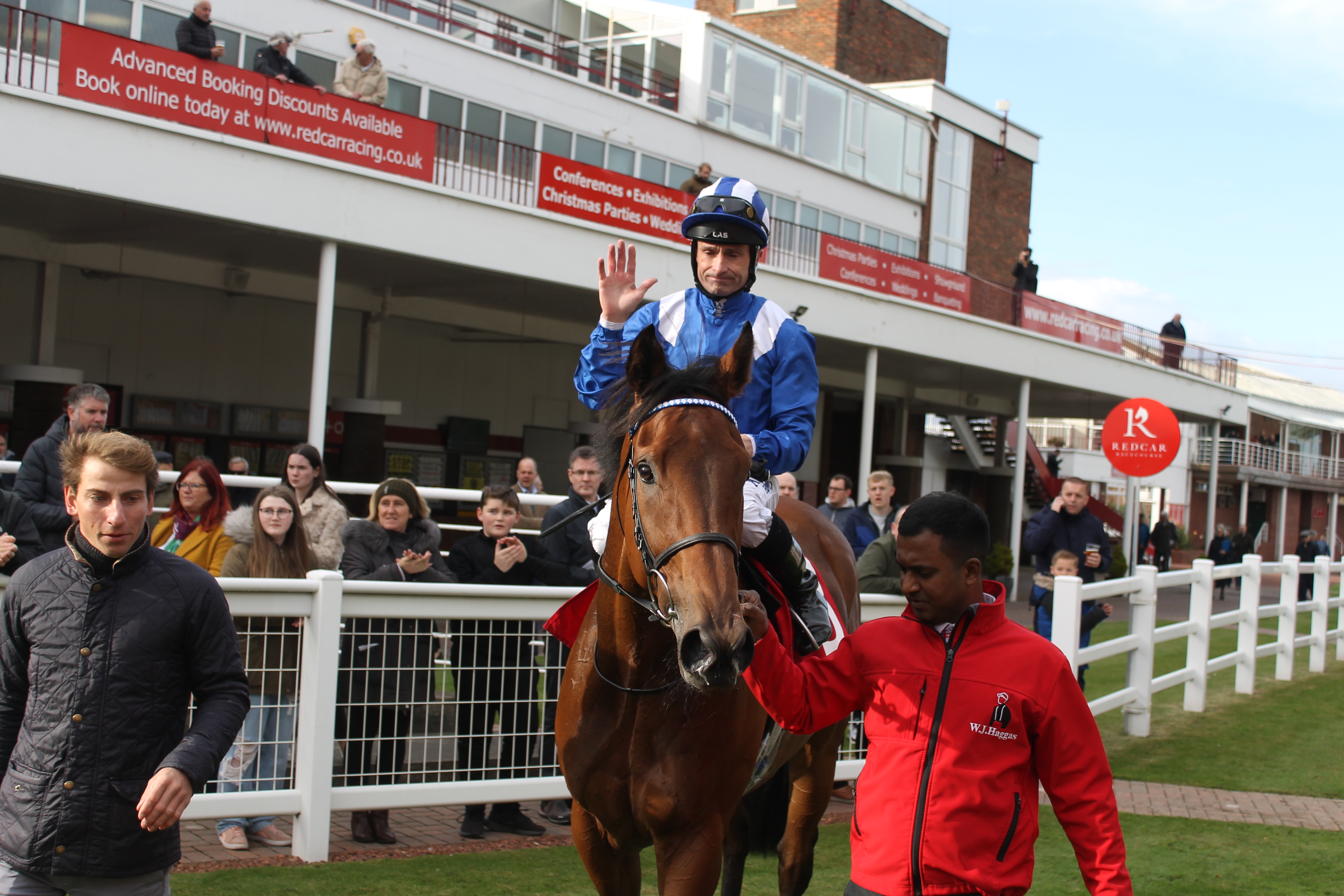 The jockey was clearly impressed with the imposing son of Dubawi, saying. “He’s a fine, big horse who is progressing nicely and, hopefully, he’s still a bit ahead of the handicapper.”

Lambourn trainer Charlie Hills and jockey Kieran Shoemark had a double at the last Redcar meeting, and they struck again as Shobiz takes centre-stage by landing the Market Cross Jewellers Maiden Stakes. 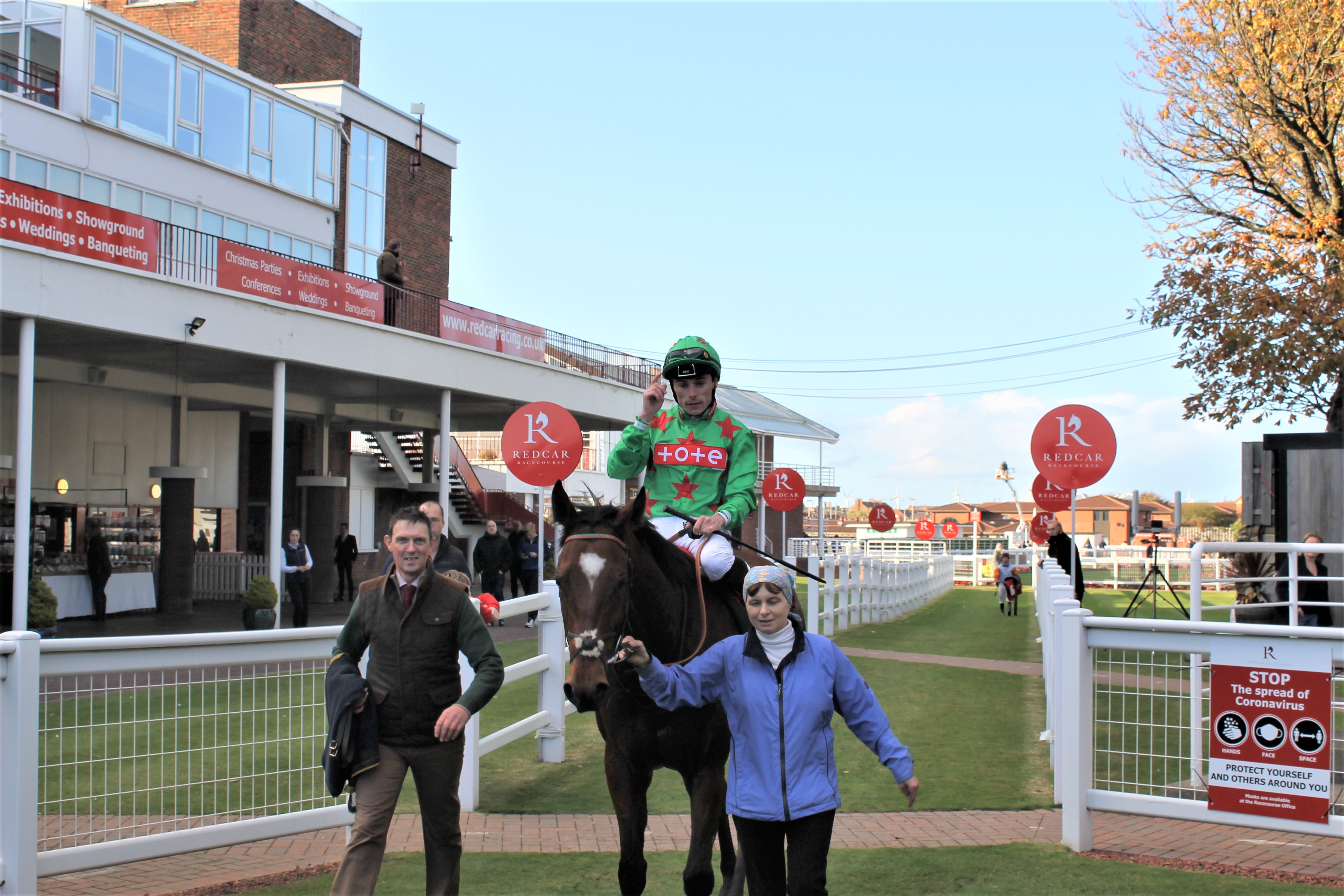 Tom Eaves got a nice tune out of Rockprincess (pictured below) at the fifth time of asking as the Belardo filly comfortably landed the Natalie and Lauren Dealhoy Nursery Handicap for North Yorkshire trainer Kevin Ryan. 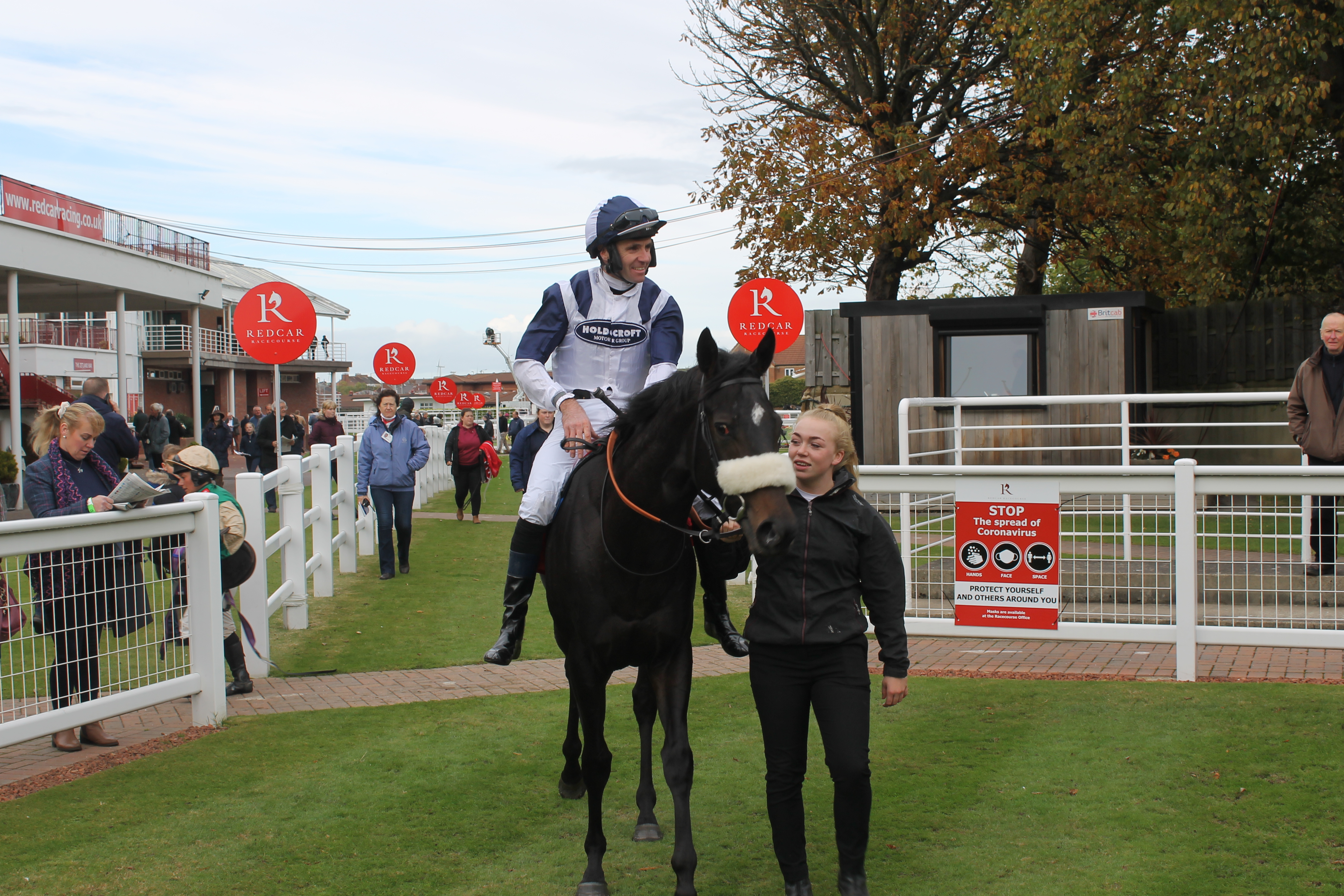 There was a first win in 17 runs for All Things Bright (pictured below), trained in Cumbria by Tristan Davidson, in the Watch Racing TV In HD Selling Stakes. Ridden by Jason Hart, the Acclamation filly outbattled Forever Forward but there was no bid at the auction. 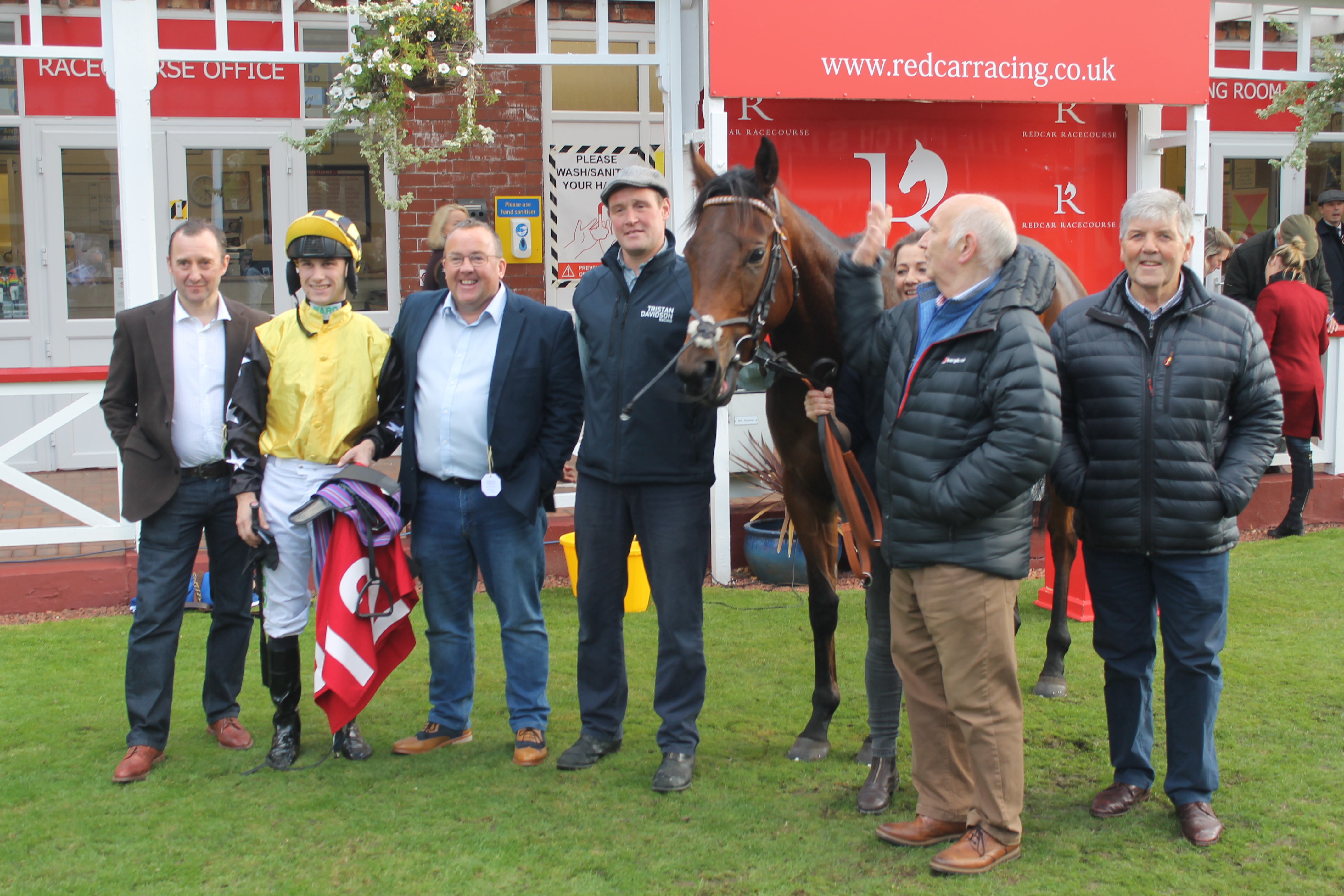 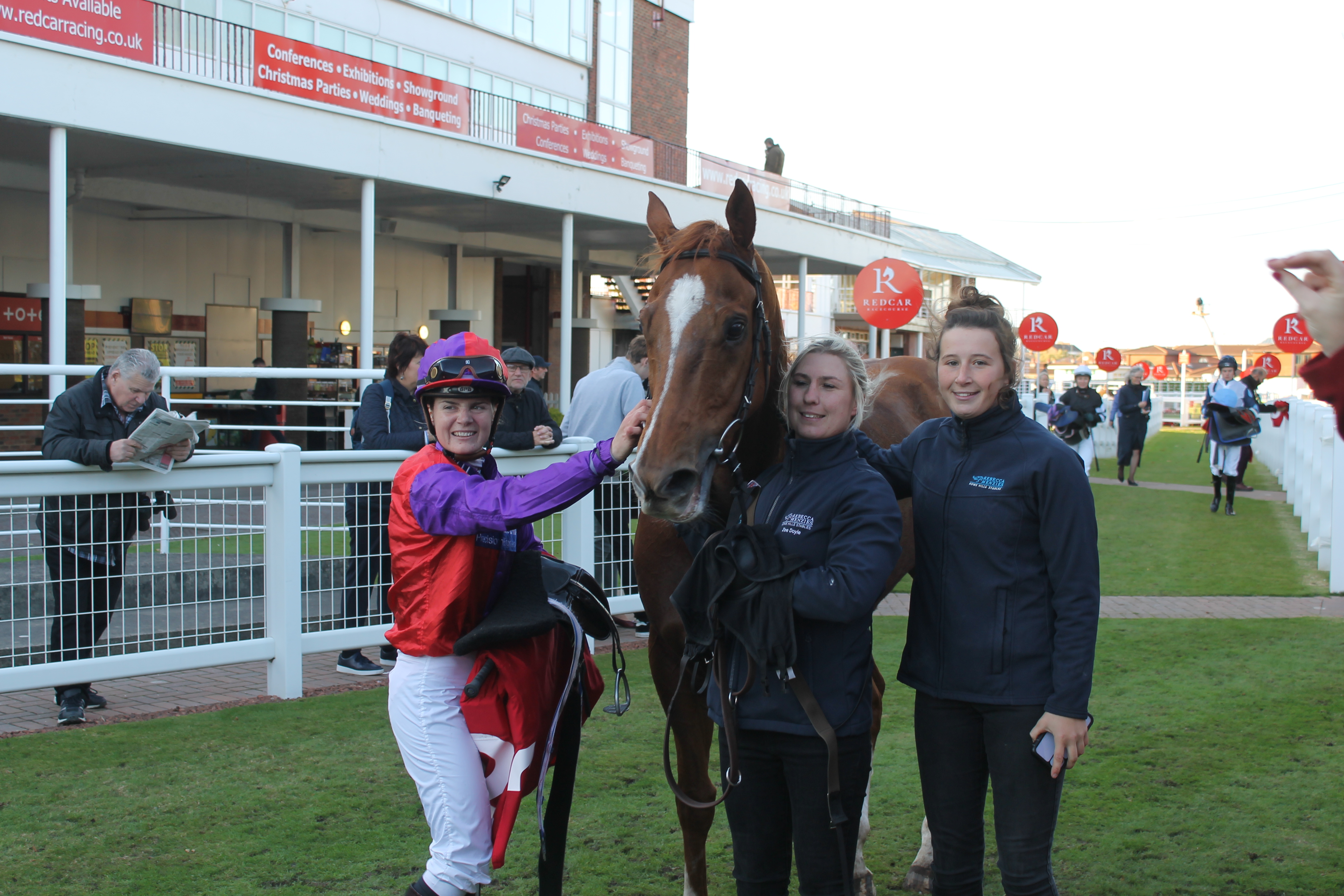 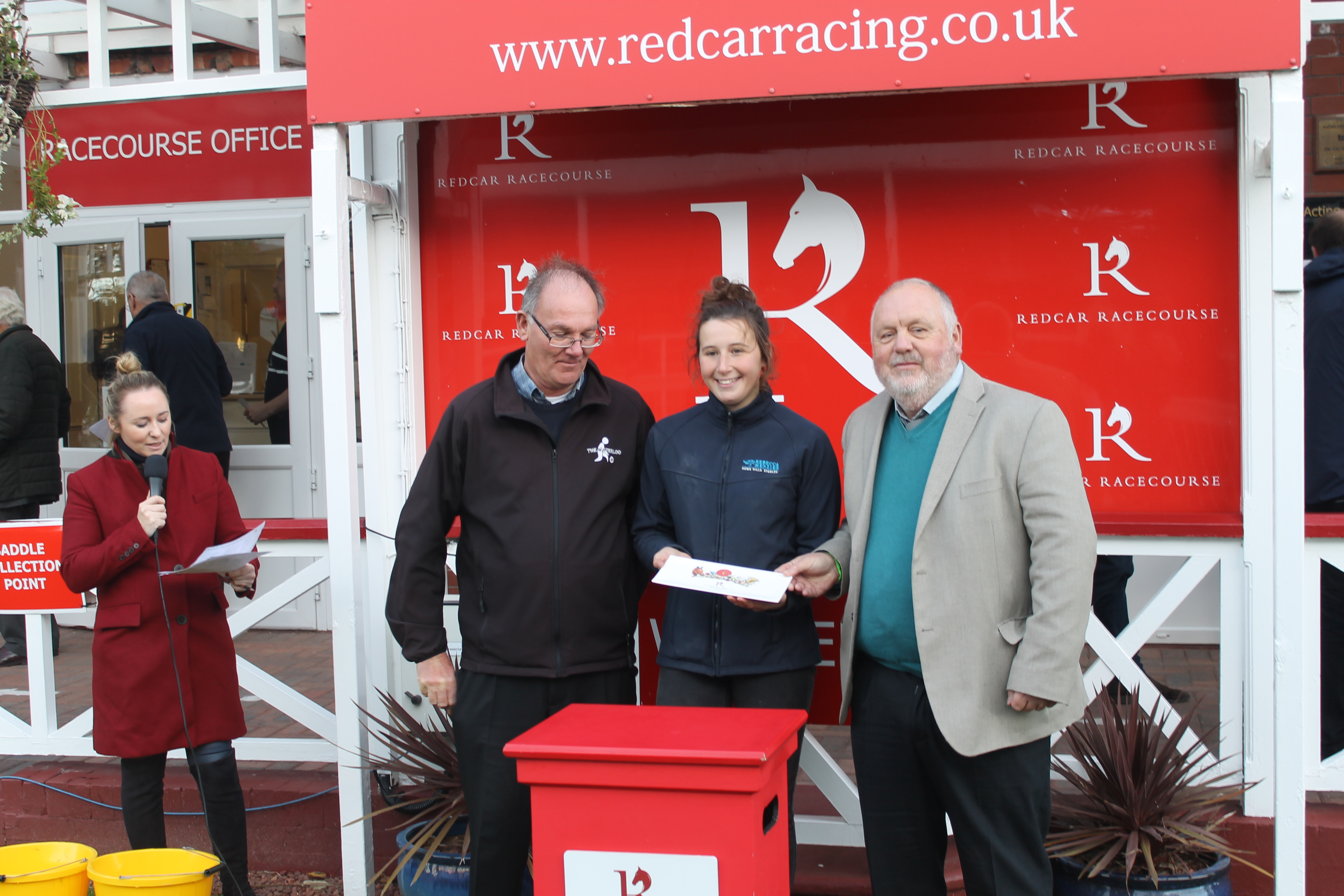 And a wind operation did the trick as Helvetian gave 7lbs-claimer Aiden Brookes a sixth career win by finishing strongly to grab the spoils in Division Two.

The jockey, who hails from Stoke-on-Trent, started out show jumping before progressing to point to points and is now attached to the Mickey Hammond yard. 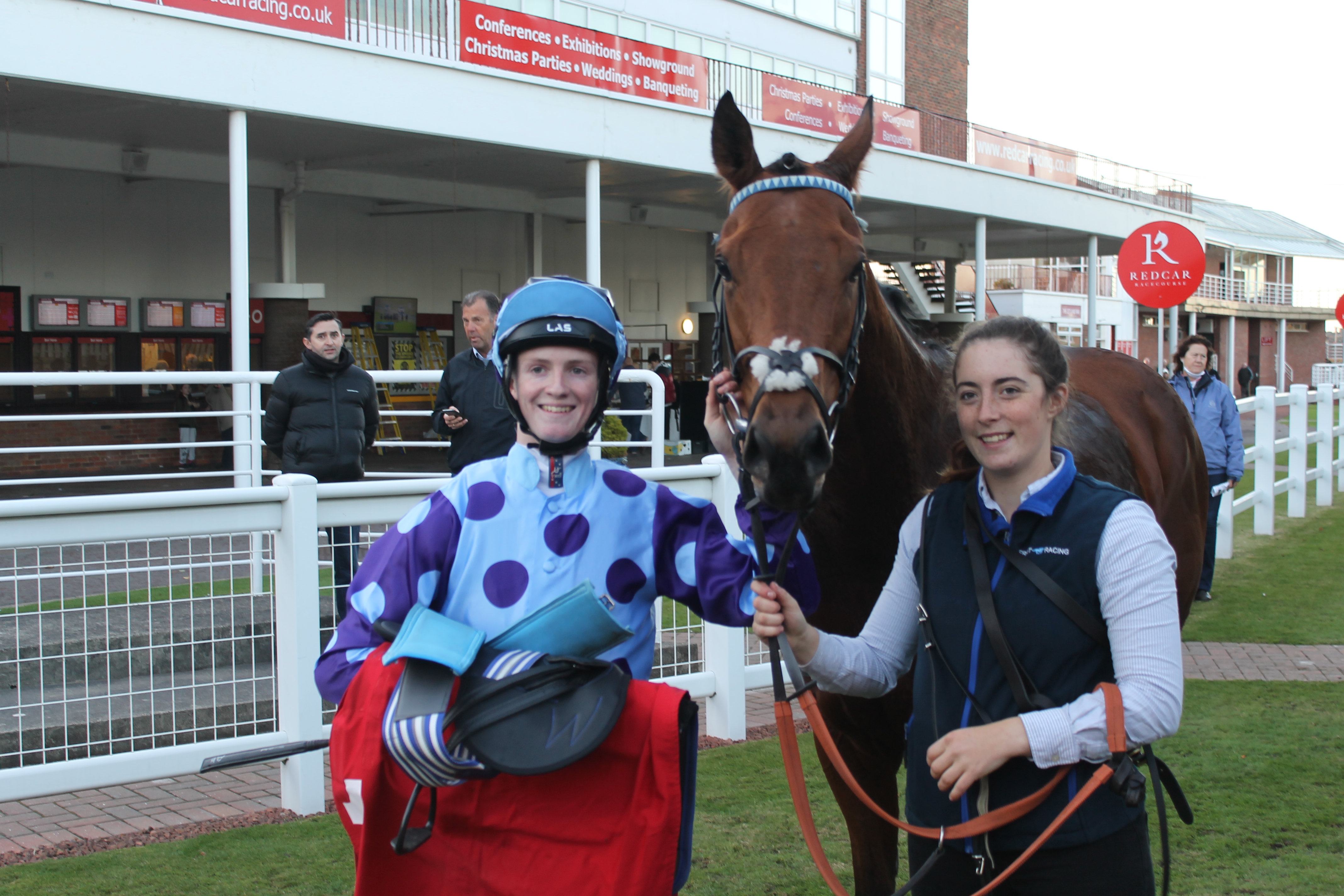 He arrived late on the Kevin Frost-trained six-year-old to catch Blazing Son close home and deny Bryan Smart a double.

Aiden said: “The boss said the most important thing was to find some cover, and I just wound him up. I knew when I gave him a squeeze that he’d get there.

“He’s won a Class 2 in the past, so he has the ability, and the wind op has obviously helped.”